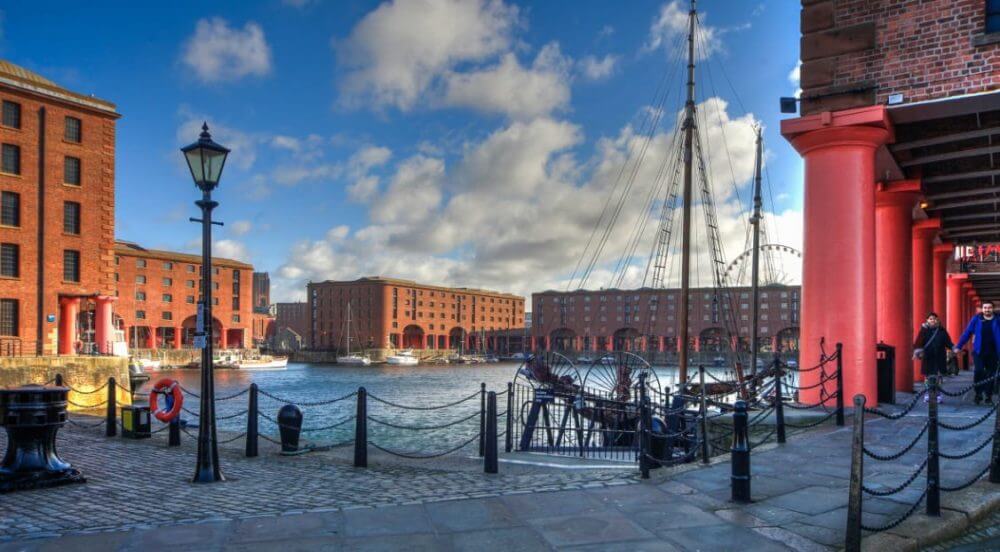 Famous for its football teams, shopping and as the home of The Beatles, Liverpool is one of the most vibrant and historic areas of the North West. As a significant port town in the 18th and 19th century, Liverpool's coastal location made it a top global trading destination. In particular, the Albert Docks located just a short walk from Liverpool city centre became one of the most significant docks in the world. Originally constructed in 1846, at a time when Liverpool saw 40% of the world's trade pass through its docks, Albert Docks was opened by HRH Prince Albert, and was home to huge warehouses where goods could be stored when they arrived from their global travels. The Liverpool Albert Docks, as well as the rest of the city's docks, secured Liverpool's reputation as one of the most significant port cities in the world at that time. During World War II, the Royal Albert Dock again became an important destination for goods to travel in and out of the city, making the docks a prime target for German bombers. While a lot of the buildings at the dock were damaged, in 1952 the Royal Albert Dock Liverpool became the largest collection of Grade I listed buildings in the whole country, with its huge brick warehouses.

While unfortunately the Royal Albert Dock Liverpool was abandoned for a short time in the '80's, it was then regenerated, and in 2004 it gained UNESCO World Heritage status, a testament to its trading past. Now, visitors come from all over the United Kingdom and the world, to see the numerous Liverpool attractions along the Albert Dock waterfront. Just a 20 minute walk from Liverpool Lime Street, Albert Dock is still very much at the heart of Liverpool.

From Tate Liverpool to the numerous bars and restaurants, there are many fantastic things to do as a family at the Liverpool waterfront. As you wander down from Liverpool city centre, just a 15-minute walk or five minutes drive away, the red brick buildings of the Albert Dock are hard to miss. As you approach, you're sure to notice the huge neon sculpture at the Mermaid Courtyard beside the main buildings, perfect for a photo opportunity. Created by Swiss artist Ugo Rondinone, 'Liverpool Mountain' is ten metres tall, and situated beside Tate Liverpool. Now, continue to your left to experience some of the best things to do in Liverpool. First, you'll come across Tate Liverpool, the home of contemporary and modern art. The only Tate museum north of London, this is a great place to check out longstanding collections, new exhibitions and learn a little bit more about the world of art.

The Tate isn't the only museum in Albert Dock Liverpool, however. Here you'll also find the Merseyside Maritime Museum, where you can learn all about Liverpool's maritime past with four floors of galleries, exhibitions and artefacts. The Merseyside Maritime Museum is also the home of the International Slavery Museum, which is significant as unfortunately Liverpool's celebrated past as a successful port also meant it had a large part to play in the European and global slave trade. To pay respect to those who lost their lives and livelihoods, and the lasting effects slavery has had in this area and the world, the International Slavery Museum is a poignant yet important part of the Albert Dock experience.

Just across from the docks you will see the huge Museum of Liverpool, another brilliant spot for families to check out. There are lots of child-friendly experiences on offer here, including the hands-on 'Little Liverpool' exhibition where kids can learn all about Liverpool's history. You can also pick up an activity backpack to complete with the kids on your way around this impressive museum.

For those who love music and the '60's, Liverpool is of course also famous as the hometown of The Beatles, one of the most famous bands of all time. For a little bit of Beatles history on your day out, you can find the largest dedicated museum to the fab four at The Beatles Story in the Albert Dock. Filled with exhibitions, memorabilia and real instruments used by the band members, music lovers will have the time of their lives at this fascinating museum. And, to continue the Beatles journey, head to The Cavern Club, just a short 15 minute walk away in the city centre. Here, you can experience the place where band we know as The Beatles was born all those years ago. Here, you'll also find the Liverpool Beatles Museum on Matthew Street, with three floors dedicated to The Beatles throughout the decades.

If you feel like something to eat on your Albert Dock adventure, check out some of the brilliant Albert Dock restaurants and cafés. From the café at the Tate Modern, the perfect place to stop for some coffee and cake, to hand-dived oysters and seafood at Lerpwl, there is something for every taste. You'll find lots of restaurants at Albert Dock itself, or you can wander a few minutes into town, where you'll find lots of places to eat, as well as plenty of shops, at the Liverpool ONE shopping centre on Wall Street. Here there is everything from Nando's to tapas, as well as lots of outdoor seating areas if you choose to take out food or bring a picnic.

The Prince of Egypt