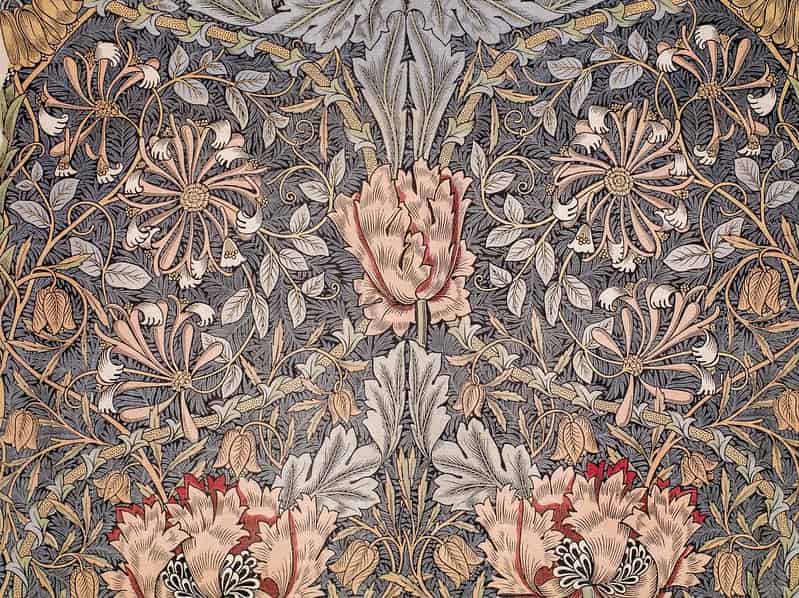 One of the most famous Victorian artists, William Morris' work went far beyond just fine art - to architecture, poetry and wallpaper among many other things.

The Victorian era is a big part of the KS2 history syllabus and the William Morris topic is taught mainly in Year 6 as an art module. With his leafy wallpaper designs, repeating patterns of grapes, birds and other animals, there are loads of fun creative projects to help children learn about William Morris art at home.

With his focus on art within the home - furniture, fabric and wallpaper among other things - this is a great opportunity for the whole family to make some beautiful pieces of art to fill your home with.

Who Was William Morris?

William Morris was an artist, architect, furniture and fabric designer, writer, translator and socialist who founded the arts and crafts movement. He believed that art should be present in everyday objects like textiles and homeware, and everyone should be able to have arts and crafts in their life.

Over the course of his life, he had a huge impact on art and design and many of his wallpapers and textiles are still being made today.

He was born in 1834: William Morris was born in Walthamstow in East London. He had one sister eight years younger than him.

His nickname was Topsy: He was known as Topsy because his curly hair was like a character in Uncle Tom's Cabin.

Morris preferred historical handcraft techniques over machines: He was born towards the end of the industrial revolution and didn't like the fact that machines were taking over from traditional craft techniques.

He studied at Exeter College, Oxford: He studied Classics at Oxford University. He found he wasn't that interested in the course but instead became strongly inspired by medieval history, style and craft techniques.

He was married with two children: He married his wife, Jane Burden in 1858 and they went on to have two daughters called May Morris and Jane Alice Morris. He and Burden met at a theatre performance the year before. She became a model for Rossetti's paintings and the two friends reportedly fell in love with her.

He was heavily influenced by the Romantic movement: Romanticism was a European art and literature movement that began in the late 1700s and continued to the late 1800s.

He was an architect and built his own house: After university Morris trained as an architect, specialising in the Gothic style. The William Morris home in London is still open to visit. It is called the Red House and is in Bexleyheath, Kent, just outside Southeast London. It is called the Red House because of the red bricks it is made from.  Another of the famous William Morris houses (but one that he did not build) is called Kelmscott Manor, located in Oxfordshire. He and his family shared it with his friend Dante Gabriel Rossetti. He wanted to move further away from the city so that his daughters could get away from the pollution.

He started his own design firm making decorative homeware: With fellow Pre-Raphaelite artists Edward Burne-Jones and Dante Gabriel Rossetti, as well as other friends, William Morris started a decorative design firm. The company was called Morris, Marshall, Faulkner & Co. and was based in Bloomsbury, London. They wanted the firm to use completely medieval craft methods to make its products, being against the use of industrial machinery. It had an ethos of equality and they gave jobs to boys from a school for the destitute. Here, William Morris began to focus on his wallpaper designs, taking inspiration from nature. Later in his life, he made lots of stained glass.

He spoke Icelandic: William Morris travelled a lot in Iceland, learnt Icelandic and even translated books from Icelandic to English.

He founded a press making books: He founded the Kelmscott Press, which published 23 of Morris' books.

He was very political: William Morris was a socialist activist and campaigned for equality in Victorian society, founding his own socialist party.

He died in 1896: When William Morris died aged 62, his doctor said he died of 'simply being William Morris and having done more work than most ten men'.

Inspired by William Morris wallpapers, this is a really easy way for the whole family to make a repeated print.

Materials: Foam Board, cocktail stick or biro, paint and sponge or roller, paper.

Method: Simply use the cocktail stick or biro to draw a Morris-inspired design onto the foam board (think grapes, flowers, birds). Then use the sponge or roller to cover the foam board with paint and press hard onto paper. See if you can make the pattern repeat.

Method: Draw different shapes onto the card then cut out the gaps so it looks like a window. Next, stick the coloured cellophane onto the back of the card, using different colours for different panes of the window.

Method: Take a look at Morris' floral tiles and then try doing your own on your squares of card. Encourage your children to think about how the pattern would continue from one tile to the next.

Some Questions That'll Get Your Child Thinking About William Morris

Why don't you ask your kids these questions to start an education discussion surrounding William Morris' art?

1. What didn't William Morris like about the Victorian era?

2. How did his work react to the industrial revolution?

3. Does his art reflect his political views?

4. Can everyday objects be art?