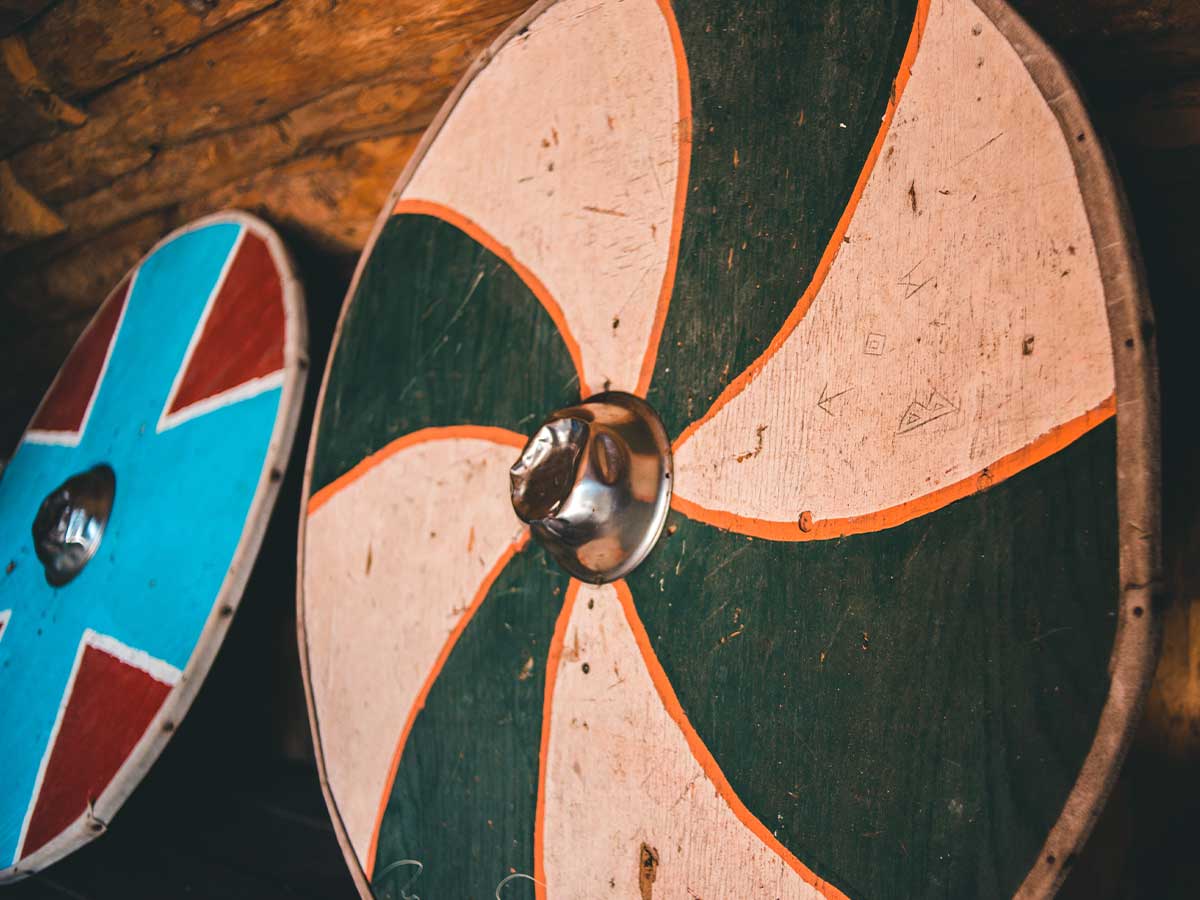 Horns, beards and battle make up a lot of Viking history but this guide is all about Viking armour - in particular Viking shields.

As part of the KS2 history curriculum, which covers everything from the Stone Age to the Anglo-Saxons, Viking history is not only a crucial element but also a super interesting one too! From Viking clothes, battles, runes (a Viking alphabet) and of course armour, these Viking shield facts won't disappoint!

Back in 793 AD, Middle Ages England was a scary place to be; not to mention the battlefields, hence the need for armour and more specifically Viking shields, typically made from all different materials and resources, and essential for warriors when in battle. Down below are some super interesting Viking shields facts as well as ideas for Viking shield arts and crafts and Viking shield designs which will entertain your little warriors for days.

What Is A Viking Shield And What Is Its Purpose?

On the battlefield it was essential for Vikings to protect themselves, and, along with wolf or bear skin (which Vikings often wore when heading into battle), most of the Vikings had shields to protect themselves. Due to the fact that armour was limited during these times and even the best armour available wouldn’t always stand up to the battlefield, the best bet that the Vikings had was to make their own shields from accessible material they could find.

As well as acting as general defence against other warriors, the Viking shield also held deeper significance, in that, they were representative of one’s own identity and loyalty, as they were decorated accordingly. Plus, in the opening moments of battle, the Viking shields were used to act as a wall to defend themselves from the enemy. Warriors stood shoulder to shoulder, shields overlapping one another to form a shield wall, maintaining cohesion and strength.

Plus, Viking shields could also be used as effective weapons themselves, they could be used to bind the opponent's weapon or to punch the enemy, making them extremely useful in battle. Also, on the odd occasion, the shield acted as a makeshift stretcher to help transport the wounded and injured from the field of battle.

Viking shields varied in size, colours and material with most shields ranging from  twenty-four to thirty-eight inches in diameter. The shields were a circular shape, typically made from wood and were gripped in the centre from behind using a metal iron boss. This iron boss was extremely important in ensuring that the shields were easy to grip and manoeuvre on the battle field. Unlike shields that were used in Ancient Greek or that of  High Medieval knights that were typically arm strapped shields, meaning the shield was strapped to the forearm of the warrior, the circular Viking shields offered more manoeuvrability and gave people the benefit in terms of active reach.

Most shields that are demonstrated in drawings and illustrations of the Viking age are seen to be painted a single, usually bright, colour such as red or blue but other shields have some kind of design painted onto them. For example, common designs included simple crosses or derivations of sun wheels or segments which demonstrated their identities as Vikings.

How Is A Viking Shield Made?

There are many rumours as to how a Viking shield was made - with limited resources (definitely no electric chainsaws or Pritt Stick!) and little knowledge, it must have been pretty difficult. It is believed that the Viking shield was made up of primarily wood, typically linden wood, with a bowl shaped metal 'boss' made of iron behind at the centre. This boss helped to provide protection for the warrior's hand and ensured better manoeuvrability for battle. Other popular Viking shields were made from circular pieces of wood but instead, had three iron bands and a handle fastened to the back using iron nails. An additional source suggests that Viking shields were made from laminated wood making them waterproof and suitable for the cold and rainy battlefield.

Plus, the front of some shields were covered with leather, which, in turn, made the shield more resistant to the impact of weapons and general fighting. However, this added a significant amount of weight to the shield making it heavier and harder to continually hold during battle. Similarly, shields may have been faced with linen, glued down with hide glue. However, this added little to no weight and also helped to strengthen the wood, helping to hold the shield structure together even if the wood split or tarnished.

How To Make Your Own Viking Shield

Let's get crafty! Get your creative caps on because we're about to talk you through how to make your very own Viking shield, ready for battle.

You Will Need: A big cardboard box, scissors, pens, paintbrush and paint and some silver duct tape.

1) To get started, grab your cardboard box and select a side to draw your shield template onto. After you've decided on the side, using scissors cut the side away from the rest of the box.

2) Then, using a large mixing bowl or anything circular that you can draw around that'll be similar to the size of your desired shield, draw around it and cut the circle out - this will form the front of your shield.

3) After, use your silver duct tape and separate your shield into four equal sections by sticking a strip of tape vertically and horizontally to form a cross.

4) Now it's time to get creative! Decorate your four sections as you wish and if you're feeling really adventurous and have some old pleather trousers lying around, maybe cut those up and attach leather to the front of your shield.

5) Then to finish it off, cut out a strip of cardboard from your box and attach it lengthways to the back of your shield to from the strap. To battle!