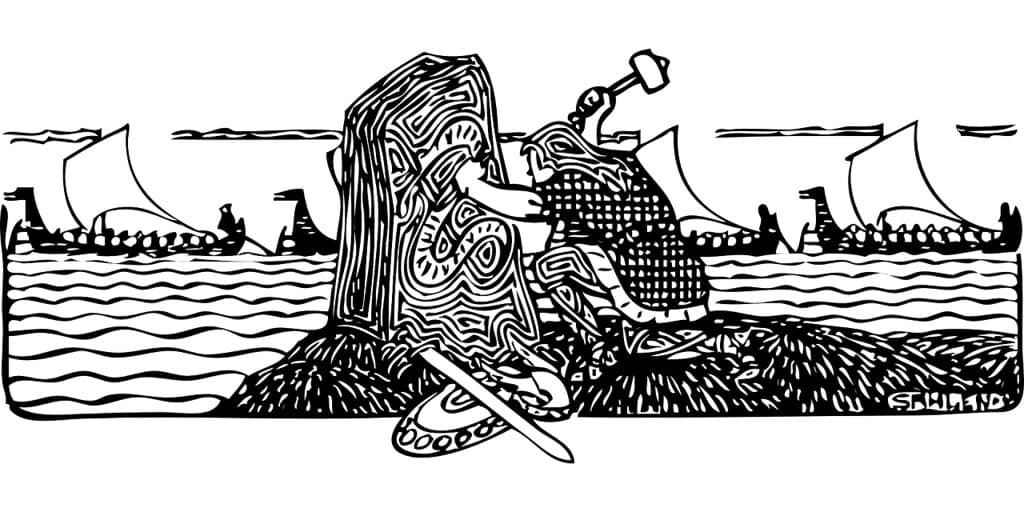 Vikings are part of the KS2 history curriculum and a fascinating people who raided and invaded most of Europe between the 8th and 11th centuries.

Coming over to the British Isles from South Scandinavia (Denmark, Norway and Sweden), the Vikings brought with them their way of life, culture and customs. Part of the Viking’s life was their written alphabet, called runes.

Viking runes are a great way to get kids interested in the Vikings and trying to write their names in runes is sure to be a fun activity.

What Are Viking Runes?

Runes make up the Viking alphabet and have been around since the 1st century AD! The Elder Futhark consists of 24 sounds. The Kylver Stone in Gotland, Sweden, is famous for recording the oldest full Elder Futhark. By the Viking age, the writing system is called the Younger Futhark and has no E or O, D, G or P, which means it only had 16 signs.

The Viking alphabet did not have a set direction of writing. It meant the sounds could be read from left to right, right to left or even from top to bottom!

There is a reason runes are made up of straight lines: they are easier to carve with a knife or chisel on hard materials like stone or metal.

The Vikings believed that the prominent god, Odin, received the alphabet when he hung himself upside down from the world tree, Yggdrasil. He hung there for nine nights, hoping to get occult knowledge, and this is when the runes came to him. In exchange for the gift, Odin gave up his left eye. The sacrifice means that the Viking people considered the runic alphabet sacred.

Whilst the Odin story is great, the reality is a bit less mysterious. It is widely accepted that the Germanic people who occupied Northern Europe around AD 100-200 created the letters by looking at the Etruscan or Latin alphabet. The Vikings then used these signs for their own purpose and adapted them. The name Futhark comes from the first six sounds of the runic alphabet (f, u, th, a, r, k).

What Was The Viking Alphabet Used For?

In Old Norse, “rune” means “secret knowledge and wisdom.” The Viking alphabet was not wasted on telling stories, instead, history and stories were told orally, in songs and sagas about heroes, gods and goddesses, great battles and warriors. The written sagas that we still have today were recorded and written after the Viking era.

Runes were carved on stones and sticks, wood, horn, seal tucks, jewellery and weapons. They were used for a range of things: to commemorate a person or events, to claim ownership of objects (the same way you might write your name on your books or clothes so as not to lose them), to keep track of sales and purchases by merchants.

The runic alphabet can be found on everyday items, tombstones, monuments and runestones, which were huge stones decorated with pictures and writing. Runestones were used to give information about the bravery of someone who had died. They were meant to be admired.

Viking letters were also used to tell fortunes by being carved on small stones. The stones would be placed into a bag, which was shaken. The stones were then cast on the floor, with the ones face up used to predict the future.

The alphabet was not just letters and sounds but sacred, and the Vikings believed each rune had magical powers. Warriors would carve a curve version of the runic alphabet on their weapons to give them strength and protection. People believed that the warriors who knew how to read and write had magical powers, would be protected during battles and could ward off evil witches.