Victorian Workhouses (KS2): Everything You Need To Know 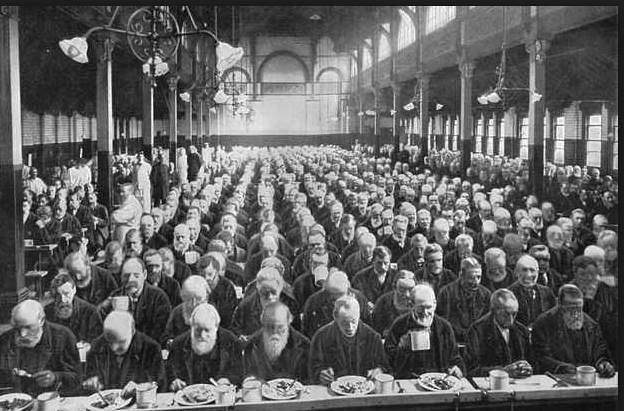 Victorian Workhouses were not only essential for Victorian England but are also a key part of the KS2 curriculum and this handy guide is here to explain the ins and outs!

As places that seem so foreign nowadays, workhouses were extremely common in Victorian society, serving as a place where poor people would be sent if they had nowhere to live or no job to earn their keep by working. Both children, orphans and adults were sent to workhouses and the living conditions, general treatment of people and the workhouse system was extremely harsh.

Why And When Were The Victorian Workhouses Created?

Prior to 1834, those that were poorer within Victorian society were looked after by the money collected from wealthier individuals, such as landowners. These people would provide the money for both children and adults so they could get adequate clothing and food.

However, this shortly changed after The Poor Law Amendment Act, also known as the New Poor Law Act, was introduced later on in 1834. This cruel law was passed and it ensured that no able-bodied person could get poor relief. The idea was that poor people were meant to support and provide for themselves but, in turn, this meant that a lot of people, including children, were left with no income to purchase basic food and clothing. Instead, they were to be sent to workhouses, which were essentially large houses, where they could earn their keep (which means money) by doing mundane jobs.

The Victorian Workhouses provided people with a place to live, a place to work and earn money, free medical care which was super important during the Victorian era, food, clothes, free education for children and training for a job. Plus, most amenities were provided on-site including a dining-hall for eating, dormitories for sleeping, kitchen, school-rooms, nurseries, rooms for the sick, a chapel, a mortuary and more.

Who Lived In The Victorian Workhouses?

The Victorian Workhouse was feared by most people, including the poor and the elderly. As part of the government’s plan to avoid encouraging ‘idlers’, meaning lazy people, Victorian Workhouses was an extreme threat to the elderly, who are sometimes unable to perform the same manual labour/work as those younger than them, as well as poorer people, who perhaps cannot access the necessary resources to have a job.

As well as the people being sent to the workhouse, including children, there was also a whole host of staff who would operate at the workhouses daily. For example, typically, there was a Master, a Matron, a Medical Officer, a Chaplain, a porter and normally a school-teacher. Additionally, orphaned (children with no parents) and abandoned children, the physically and mentally sick, the disabled, the elderly and unmarried mothers could also be found in the workhouse.

Plus, it was extremely common for families that were sent to the workhouse to be split up; women, children and men all had different living and working areas in the workhouse and therefore it was normal for them to be separated. And if that wasn’t bad enough, families could be punished for attempting to speak to one another!

What Were The Conditions Like Inside The Victorian Workhouse And Punishments?

As far as looks go Victorian Workhouses typically consisted of stark, undecorated, prison-like structures, with no curves, just sharp corners. High walls surrounded the entire workhouse making it impossible to catch a glimpse of the outside world, the windows were a whopping six feet from the floor, and a further 'refinement' meant that some of the window sills were on a downward slope, so as to prevent the inmates from resting or sitting on them.

In the workhouses in the Victorian era, inmates were made to wear uniforms, making it impossibly hard to distinguish people as well as demonstrating their ‘identity’ to those in the outside Victorian world. For women, this consisted of a shapeless dress, made of striped (convict-style) fabric and for men, a striped shirt, ill-fitting trousers, as well as a thick vest and a coarse jacket. All inmates wore hob-nailed boots that were extremely durable.

Punishments inside of Victorian Workhouses ranged from food being withheld from inmates so they would starve, being locked up for 24 hours on just bread and water to more harsh punishment including being whipped, being sent to prison and meals stopped altogether.

What Was The Food Like Inside A Victorian Workhouse?

One the whole workhouse food would be largely tasteless and a key part of the diet for those inside a Victorian Workhouse was bread. For larger workhouses inmates were forced to sit in rows, all facing the same way, in some cases with separate dining halls for men and women.

At breakfast in the workhouse, typically, gruel or porridge was served, both made from water and oatmeal, and at dinner, it was normally workhouse broth which consisted of the dinner meat water, as well as a few vegetables mixed in. The mid-day dinner was the meal that contained the most variation with some days being meat and potatoes - the meat was typically cheap cuts of beef or mutton and the potatoes were likely to be grown in the workhouses own garden - and other days being soup - which would typically be a broth with some vegetables added and occasionally thickened with barley, oatmeal or rice - no room for fussy eaters here!

Plus, you might be surprised to learn that tea was actually served in the workhouse but not as we know it. Tea was often served without milk, for the elderly and infirm at breakfast. Not to mention the pudding, which was typically a form of pudding, for example, suet pudding which might have been served with sultanas or gravy, especially if it was being consumed by children or infirm.