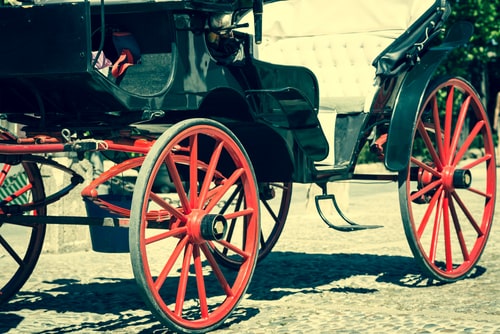 The pace of change during Queen Victoria's 64 year reign was unprecedented, transforming every aspect of life - including how we got around. At the start of the era, Victorians' transports were largely horse-driven, but by the beginning of the 20th century railway travel was popular, the car and bicycle had been invented, and the first electric tramways were also in use.

What Transport Did The Victorians Use?

The Brougham and the Phaeton were the names of two popular horse drawn carriages.

How the poor travelled:

Most poor people could not afford to buy their own transport. The lucky ones had wagons that were drawn by one horse, but many poor Victorians had to travel everywhere by foot.

In cities, horse drawn buses, known as omnibuses, were a popular form of Victorian transport. They were pulled by three horses and could carry 22 people.

Victorian buses began to change towards the end of the nineteenth century,  and the first public journey by a bus with a petrol engine took place in 1899.

The first motorcar was built in Germany in 1885 by Karl Benz and had only three wheels.

The first British made car was built by Frederick Bremer in 1892 - and had four wheels!

Only very rich people used cars. In 1896, the speed limit on roads was increased to fourteen miles an hour.

Before the invention of steam trains, it took twelve hours to travel from London to Birmingham, using a horse drawn carriage.  Steam trains halved the journey time.

Five thousand miles of railway were built in the 1840s.

Between 1845 and 1900, £3 billion was spent on the construction of Britain's railway network.

In 1863, the world's first underground railway opened in London.

A new form of Victorian travel was invented in 1871: The Penny Farthing.

The Penny Farthing was the first form of transport to be called a bicycle. It was expensive to make, so was only used by the wealthy.

In 1876, the world's first passenger steam tram started to operate in Wales.

The first electric tramway opened in Brighton in 1883.

Fun Facts About The Victorian Times

The Victorian era is the period in history from 1837 to 1901, when Queen Victoria reigned.

In rich families, only the men worked.  They owned factories and other businesses, or worked in professions such as medicine, law, and banking.

Rich families had servants, such as maids, butlers, cooks, gardeners, housekeepers and nannies. These jobs were done by poorer people.

Poor Victorians also worked in the factories and mills, on farms, in the mines, and as manual labourers.

Many poor children had to work during Victorian times.  They worked long hours in factories, as chimney sweeps, servants or rat catchers.

In the early Victorian era, only children from wealthy families went to school because there was no free education.

In 1880, it became compulsory for all children to go to school from the age of five until the age of ten. Some schools provided free education, but many charged a weekly fee that was hard for poor families to afford.

In 1891, Parliament passed the Free Education Act to make it easier for poor children to go to school.

Britain was going through the Industrial Revolution during Victorian times.  Great changes to the way we live and work took place during this period.

Questions To Ask Your Child About Victorian Transportation

How easy was it to travel around in Victorian times?

Did rich people and poor people use different types of transport?

How did transport change during the Victorian era?

What were the benefits of the new types of transport?