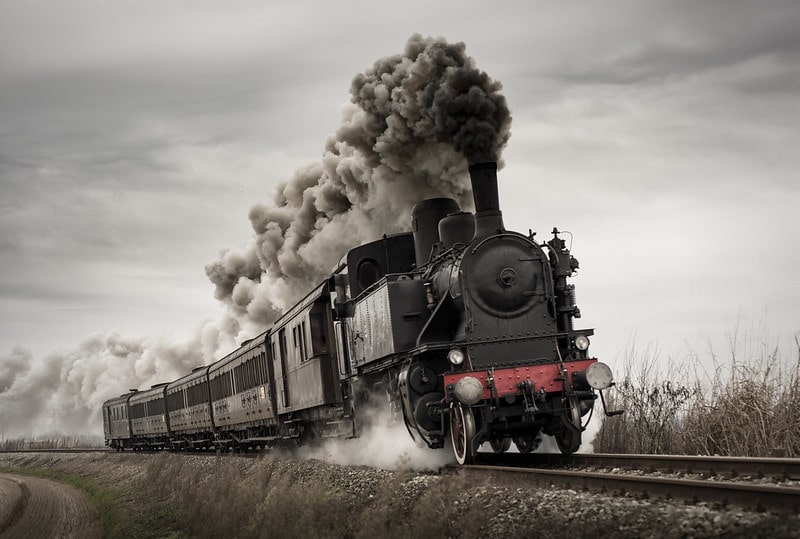 Help keep your KS2 child on track with their history learning by getting up to speed with the Victorian train history timeline and key Victorian facts relating to the growth of railways and their impact on social and industrial revolution.

Railway transport was the most popular means of travel by Victorians, who were the people that lived between 1837 and 1901, during Queen Victoria’s 64-year reign. Britain has the oldest railway system in the world and was the first country in history to use steam locomotives.

Victorian trains and railways played a huge role in the Industrial Revolution and the enormous economic and social changes that took place during the Victorian era. Before rail travel, goods and materials were transported using canals and roads but these were too slow and ill-equipped to cope with the dramatic growth of British trade and industries.

Railways completely transformed Victorian life. As Britain’s incredible railway infrastructure grew and developed, people were able to quickly, easily, and cheaply get to places that had previously seemed very far away. Railways enabled more people to go on day-trips or holidays, they made communication quicker and facilitated the growth of national newspapers, and the ease of mobility afforded by them meant that it was easier to maintain national law and order.

The world’s first steam locomotive railway journey took place at the Pen-y-Darren Ironworks in Wales in 1804. The unnamed steam locomotive was built by Richard Trevithick and travelled a distance of 16 kilometres.

How Does A Steam Train Work?

Steam trains are powered by coal, which is burned in a boiler to make steam. The steam is then used to provide power to the pistons, and the pistons make the wheels turn.

The first passenger-carrying railway was the Oystermouth Railway, that linked Swansea and Mumbles. It opened in 1807 but, at the time, used horses, rather than steam locomotives, to pull carriages along the railway tracks.

1825: The First Passenger-Carrying Railway To Use Steam Locomotives

The first passenger carrying railway line to use steam power was the Stockton and Darlington Railroad, built by George Stephenson and opened in 1825. The first train to run on the railway was Stephenson’s Locomotion No.1.

In 1829, a competition called the Rainhill Trials took place to find the fastest steam locomotive for use on the forthcoming Liverpool to Manchester Railway. The winning locomotive, built by George Stephenson and his father Robert Stephenson, was called The Rocket and reached a history-making speed of 29 mph.

1830: The Liverpool To Manchester Railway

The Rocket was the first train to travel on the Liverpool to Manchester Railway, which was also built by George Stephenson, and opened in 1930. It was a turning point in the history of railways and the beginning of modern railway networks and infrastructure. The Liverpool to Manchester line was the first inter-city passenger railway, the first to have terminal railway stations, and the first railway to have scheduled services.

In 1833, pioneering engineer Isambard Kingdom Brunel (pictured below) was appointed chief engineer of the Great Western Railway, which would run from Bristol to London. In order to build the 116 mile railway, Brunel had to construct tunnels, viaducts and bridges; including the two-mile long Box Hill Tunnel. It was a hugely ambitious project and a major achievement for Brunel, whose designs revolutionised railways. The first section of the Great Western Railway opened in 1938, but the line wasn’t fully complete until 1841.

The biggest growth of railways took place in the 1940s, with hundreds of railway lines opening all over Britain. Railway mania gripped the country and, by 1845, 30 million passengers were travelling on 2,441 miles of railway. By the end of the decade, most villages and towns in Britain had at least one rail connection and there was an almost complete railway network.

The country’s first electric railway, built by Magnus Volk, opened in Brighton in August 1883. It took another fifty years for electric trains to become popular and begin to replace steam trains.

1900: Railways At The End Of The Victorian Era

By the turn of the century, Britain had 18,680 miles of railway line, which was used to carry 1,100 million passengers, and enormous quantities of freight, on steam locomotives that travelled up to 70mph.

Ideas To Discuss With Your KS2 Child

Once your child has picked the steam locomotive that they think is best, ask them to design a poster to persuade other people that this train should be named Britain’s greatest steam locomotive.