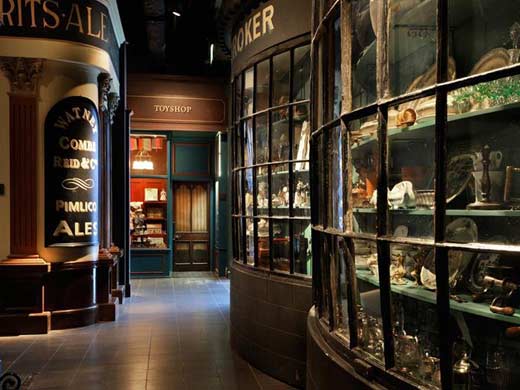 The Victorian Era was an amazing time for inventions and many objects and products we use today were invented during this time.

From transport, like bikes (including the famous penny farthing!) and trains, to the first electric light, telephones and post boxes, the inventions of the Victorian period enabled people to communicate with other people miles away. Even our beloved sweet treats can be attributed to the Victorian period.

Jelly babies were created and so was the first chocolate under Queen Victoria's reign! They might be one of our favourite inventions on the list.

The First Underground Railway Opened In 1863

After the steam train was invented in 1804, the first underground railway was invented in 1863 in London. More than 30,000 people tried out the tube on its opening day! That doesn't mean it was a comfortable journey though. There were no ventilation shafts to let the smoke out of the tunnel, so lots of smoke would build up and the drivers would be coughing all the time. Before the invention of the railway, if you wanted to go from London to Edinburgh, it would take 12 days on a horse! After railways were invented, it took only eight hours.

The First Photograph Was Taken In 1835

Along with the other amazing Victorian inventions was the first ever photograph. This wasn't like the instant photographs we all take now today. If you wanted your photograph taken you had to sit still for a very long time! During the 1830s, most towns had their own photographic studios where families would go in their best outfits to have their portrait taken - this way, their family could be remembered forever.

So whilst you might think the first selfie was invented in our time, it was actually a Victorian-era invention!

Morse Code Was Invented In 1844

This Victorian invention is one you could put to practice today.  In the 1830s and 1840s, Samuel Morse invented a system of electronic communication, using dots, dashes and spaces to represent letters, numbers and punctuation. These electrical signals were sent via a telegraph. This sent signals over a wire that was laid between stations.  Samuel Morse sent his first ever telegraph message in 1844 from Washington to Baltimore!

The First Public Toilet Opened In 1851

Victorian inventions were pretty amazing, another one is public toilets! When men started working in factories, they had to have somewhere to pee but there was often only one toilet in an area that was very crowded. This meant the toilet would overspill - yikes, we don't even want to think about the smell. So to make things easier,  George Jennings introduced public toilets, which he called 'monkey closets', at the Great Exhibition in 1851.

You might think that post boxes are quite a boring invention, but they are actually very important. They're the Victorian equivalent to your WiFi box! This is how people sent messages to one another - through letters

People had simple letterboxes outside their house and in offices in the early 1800s but it wasn't until Rowland Hill suggested that there should be roadside letterboxes that it became a great British invention. Following the penny post mail reform in 1840 (when stamps were also invented), sending letters became increasingly popular and people didn't want to travel miles just to send a letter. With the penny post system, it only cost one pence to send a letter!

They are still massively important, with over 115,000 across the UK as a whole.

Calling everyone with a sweet tooth!

Ice-cream soda was invented in 1851s by Jacob Fussell. He became the first to manufacture it on a large scale, although evidence of flavoured ice and ice-cream goes back to the Persian times

This is another creation that was really an accident. Lots of people wanted Jacob's dairy products and he often had too much cream. So he decided to make it into ice-cream! He then made a factory. A whole factory dedicated to making ice-cream...we would definitely get brain-freeze.

The Penny Farthing Was Invented In 1871

The penny-farthing bicycle is something you've probably seen in museums before. It's technically the first ever bike!

It was really popular in the 1870s and 1880s because it meant that people could travel over rough and cobbled terrain. It had many advantages but one disadvantage is that it was quite dangerous, as many people would fall off because of the big front wheel.

The Frenchman Eugene Meyer can be attributed as the inventor. Its popularity declined after the 1880s when John Kemp Starley created the Rover Safety Bicycle and John Dunlop created the pneumatic tire (this means the tire uses gas). This way, no one fell off because of the front wheel. If you're lucky, sometimes people will ride a penny-farthing at a festival - make sure you keep a lookout so you don't get hit by one!

The Telephone Was Invented In 1876

Thanks to the telegraph, inventors in the Victorian times were inspired and really wanted to not just send signals through an electrical cable, but the human voice.

Alexander Bell is credited with the invention of the telephone, starting off by working on the harmonic telegraph. During this, he realised he wanted to send the human voice across electrical cables and began working on this.

With the help of his friend Thomas Watson, the two found a way for a receiver to turn electricity into sound.

The Light Bulb Was Invented In 1880

This is an everyday convenience that is one of the most useful and important creations to come from the Victorian Era. Imagine having to use candles all the time...

If you've ever shone a light through your hand, and then your hand illuminates in a red light, this is similar to x-rays. Try it now - if you get a torch and turn it on, put your palm or fingers over the light (but make sure it isn't on for too long as it will get hot) you'll see your hand change colour with the light.

X-rays were actually invented by accident by a German physicist, Wilhelm Conrad Röntgen in 1895. He found that passing an electric voltage through a tube of gas gave off a fluorescent glow and the X-ray was born!

This neat creation is immensely useful because it made travelling a smooth and easy journey. Roads before tarmac were cobbled and bumpy. But Edgar Purnell Hooley combined different materials and heating a tar mixture. The first tarmac road was pioneered in Nottingham.