109 Unique Mermaid Names For Your Baby 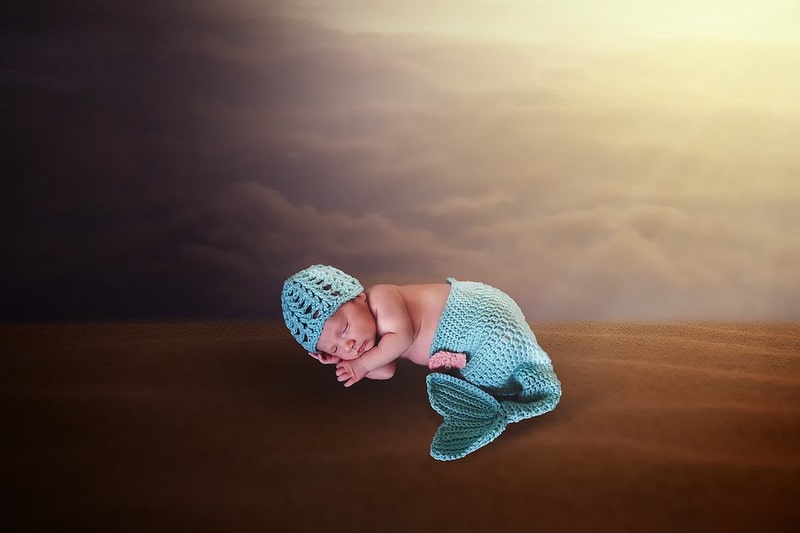 When it comes to naming a child, many parents take inspiration from a vast range of subjects, whether that's from places around the world or following a particular tradition. Of course, your baby name inspiration may depend on what your favourite hobby happens to be. However, should you love all things nautical, or have an interest in the iconic movie The Little Mermaid, the beautiful names we have compiled here are just for you. And mermaid names don't just mean monikers for lovely little girls, legends speak of mermen after all!

Aside from the classic Disney movie, interestingly history speaks of mermaids in Europe from as early as Greek mythology. Fishtailed sirens have frequently cropped up in myths and folklore across the world. In Asia Merfolk are mentioned in the Shanhaijing (Classic of Mountains and Seas) series of Ancient Chinese geography and mythology, dating from the 4th century BC. And still, to this day, mermaids are going nowhere fast. With centuries of tales, fascinating books and movie remakes across the globe, this all means one thing- there are some seriously beautiful merfolk names. Let's take a look at top mermaid names.

Mermaid Names From The Movies

From Disney mermaids names to other cult classics, there's plenty of lovely mermaid names for girls.

1.Adella, Adella is an older sister of Ariel in the classic Disney film, The Little Mermaid.

2.Alana, Alana is another Little Mermaid name, as another sister of Ariel.

3.Andrina, from the classic Disney film The Little Mermaid, Andrina is another older sister of Ariel.

4.Attina, Attina is another of The Little Mermaid names, as another sister of Ariel.

5.Aquata, from the classic Disney film, Aquata is one of Ariel's older sisters.

6.Elvira, this pretty name is the mermaid in The Ingo television series.

8.Miranda, this is the pretty name of the leading mermaid played by Glynis Johns in the 1948 movie Miranda.

9.Shan, in 2016, Chinese cinema saw the release of a movie called The Mermaid. The film became a massive box office hit, and the leading mermaid's name is Shan.

10.Syrena, this is the name of a mermaid in Pirates of the Caribbean: On Stranger Tides, 2011.

11.Tamara, this is the name of a mermaid in Pirates of the Caribbean: On Stranger Tides, 2011.

Take a look at our top picks from across the globe.

13.Anahaita, (Old Persian) This is a variant of the name for the Iranian goddess of the waters.

14.Asherah, (Semitic origin), meaning 'she who walks in the sea".

16.Seriea, (Portuguese origin), this is the Portuguese word for mermaid.

17.Sirena, (Spanish origin), this is the Spanish word for mermaid.

Mermaid Names From Myths and Legends

Centuries of maritime tales have resulted in many beautiful mermaid names, perfect for a baby.

20.Amatheia, (Ancient Greek), is a Greek sea nymph (Nereid), meaning "the one who rears or nurses the fish."

21.Asia, (Greek origin) is so much more than a place name. In  Ancient Greek mythology, Asia was the daughter of Oceanus and the mother to Atlas and Prometheus. The meaning of the name is "sunrise." What a truly adorable name for a little girl.

22.Asrai, (Old English), this is the name for an aquatic fairy in ancient English folklore.

23.Cleodora, (Greek origin), the daughter of a river god and lover of Poseidon.

25.Muirgen, (Old Irish origin), meaning "born of the sea". The name of a woman in an Irish legend who transformed into a mermaid.

28.Niminane, (Old English origin), this is the name of the Lady of the Lake in an Arthurian legend (a variant of Viviane.

29.Sedna, (Inuit origin), Sedna is the name of the Inuit goddess of the sea, who is said to hold sea animals in her hair.

31.Tethys, (Greek origin), was the Ancient Greek goddess of freshwater.

33.Thessalonike, (Greek origin), she was the famous sister of Alexander the Great, widely believed to have turned into a mermaid.

35.Viviane, (Latin origin), meaning "lively". Viviane is the Lady of the lake in ancient Arthurian legend.

The sea has inspired plenty of lovely baby names, take a look these names, fit for any mermaid.

50.Morgan, (Celtic origin meaning, "lives by the sea, bright sea, the edge of the sea".

53.Nerissa, (Greek origin), derived from the Greek word for water.

56.Stormi, (American origin), this is the name of celebrity Kylie Jenner's daughter.

Merfolk mythical creatures speak of plenty of mermen. Here's some boys names you will surely love.

61.Aegaeus, (Latin origin), meaning "one from the Aegean Sea".

63.Calypso, Greek origin), is the name of the nymph who captured Odysseus in Ancient Greek mythology.

64.Cas, (Dutch and Persian origin), meaning "King of the treasure".

67.Delphin, (Greek origin). Delphin was the leader of the dolphins, Poseidon placed him in the sky as the constellation.

68.Dillon, (Welsh origin), meaning "son of the seas" There are many variants of the spelling.

79.Neifion, (Welsh origin). This lovely baby name is a form of Neptune, "God of the sea."

80.Neptune, (Ancient Rome), Neptune is God of the sea in Roman mythology.

81.Pacific, (Latin origin) meaning, the name of the ocean and "sea-land."

82.Phorcys, (Greek origin), Phorcys was the Ancient Greek God of hidden dangers of the deep sea.

84.Poseidon, (Greek origin),  Poseidon was the Ancient Greek God of the seas.

90.Susanoo, (Japanese origin), Susanoo was a  Shinto God of storms and the ocean.

92.Taras, (Greek and Russian origin), in Ancient Greek mythology this is the name of Poseidon's son.

Mermaids From The Arts

Arts and literature have also inspired many beautiful famous mermaid names, perfect for a baby.

102.Aquamarine, is the name of the mermaid in the book of the same title by Alice Hoffman.

103.Coralia, this is a mermaid name from a 19th-century ballet, inspired by the book "Undine".

104.Fredrika,  is the name of the mermaid from the book "Sleeping with the fishes" by Mary Janice Davidson.

105.Khalen, is the name of the siren in the book "The Siren" by Kiera Cass.

106.Mele, is the name of the mermaid in the book "Mele the Mermaid" by J. Cecil.

107.Neela, is the name of the mermaid who holds the light in the book series the Waterfire Saga, by Jennifer Donnelley.

108.Serafina, is the pretty name of one of the very brave mermaids in the Waterfire Saga series, by Jennifer Donnelley.

109.Syrenka, is the name of the wronged mermaid in the book Monsterous Beauty, by Elizabeth Fama.