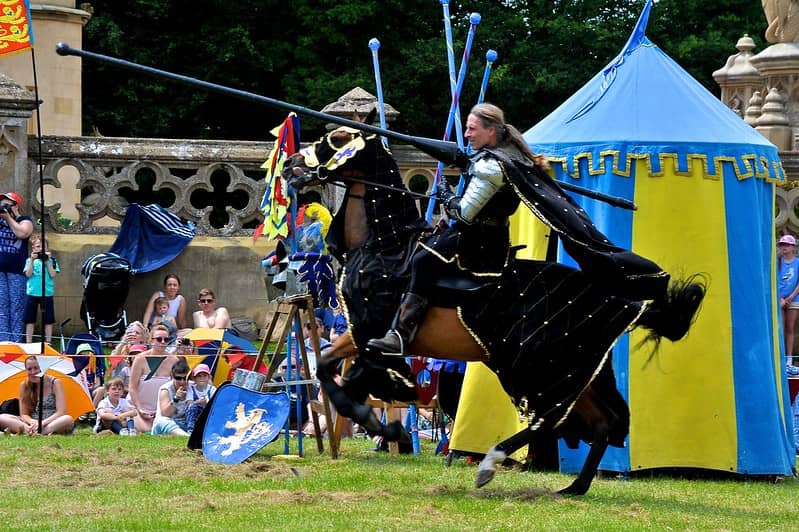 The Tudors ruled from 1485 to 1603 and gave us some of the most recognisable monarchs of our history: Henry VIII and Elizabeth I.

Tudor times were not all about Reformation, the dissolution of the monasteries or even the naval explorations that led to the 'discovery' of the Americas. The 16th century was also a time of leisure and games.

Throughout history, from Kings and Queens to the lowliest of peasant, games and sports have been played for various reasons: downtime, leisure, proof of health and station and even diplomatic showcasing. In Tudor times, sports were extremely important, especially as Henry VIII presented himself as a 'sporting man', which meant he was healthy and fit to rule, as well as a 'warrior'. Enemies, beware!

What Sports Did They Play In Tudor Times?

An incredible display of wealth, only the nobility could take part in jousting tournaments. Two armoured knights on horses would gallop towards each other, separated by a wooden barrier, and try to knock their opponent off their horses with a lance. The barriers separating the two galloping knights were made of canvas in the early days but were replaced by wood for safety reasons: it gave fewer chances for the heavily armoured competitors to collide into one another and get badly hurt.

However, jousting was not without its dangers: Henry VIII famously got injured during a tournament in 1536. The leg wound he sustained bothered him for the rest of his life.

For a very real and easy understanding of the class system of Tudor times, look at hunting. Deer was for the rich, yeoman farmers were allowed to hunt foxes and the poor hunted hares and rabbits. The nobility loved hunting with hawks, which allowed for a display of wealth. Henry even owned a hawk’s hood that was set with rubies and pearls! It is also said that he often spent hours hunting stags.

Considered cruel even in Tudor times, bear baiting was nevertheless enjoyed by both the rich and the poor.

Henry VIII and Elizabeth I absolutely loved watching a chained bear being attacked by a pack of dogs. A ring was even constructed on the grounds of Whitehall to allow the rulers to watch the dogs trying to bite a bear’s throat! Whilst considered a sport at the time, the spectacle was banned by the House of Commons in 1585, but Elizabeth overruled them. Nobody could take away her entertainment.

Also called 'Real Tennis', Tudor tennis was a sport played indoors by the nobility. Using balls made of leather and hair and rackets of wood and sheep gut, the sport was played pretty much the same way it is now. In a large room, players had to hit the ball over the net. They could also bounce the balls off walls and score points by putting the ball through one of three goals set high on the walls. Henry, ever the sporting man, was a great fan and has a court built at Hampton Court in 1530.

Football in the times of the Tudors had very little in common with the football of today. There was no set number of players who could participate and the ball was made with an inflated pig’s bladder. This was very much a lower classes game, and it was even played throughout the countryside between villages, with the aim to get the ball back to your own village. It was “distracting,” according to the authorities, and so was banned in 1540. The peasants were instead encouraged to go back to archery, a much more useful skill when war was always threatening.

But football back then was also played in a more 'traditional' manner, with the posts set about a mile apart and the ball needing to be put through the opposite team’s posts. To do so, you could kick, throw or even pick up the ball. Injuries (and even death!) were commonplace: tackling, tripping and even punching the other players was allowed.

What Sports Did Henry VIII Enjoy?

We already know that Henry enjoyed popular Tudor entertainment like jousting, bear baiting, hunting and tennis. But these were not the only sports the King enjoyed.

Henry VIII enjoyed riding, fencing, archery and wrestling, all sports that showcased his warrior abilities. In the 16th century, the King would have been expected to lead his armies onto the fields of war, so to be a skilled sportsman, especially in martial games, was a show of strength to potential enemies, but also reassured his friends he was a good leader.

Whilst most of the nobility would have followed the King when it came to their preferred pastimes, games favoured by the upper and middle classes were not all about war.

Bowls and Skittles were extremely popular and dedicated lawns could be found throughout the kingdom, whilst Pall-mall, an early form of croquet, was also widely played.

Cards and dice were also played by people in the 16th Century. Trump was actually invented in Tudor times! Popular games included chess, draughts, backgammon (called Squares at the time) and Fox and Geese (or Fox and Hound). Billiard was also played in the stately homes and palaces, with Mary Queen of Scots a fan.

Cards, boards and dice games were highly competitive. Elizabeth I was rumoured to be an awful cheater who really didn’t want to lose!

Try asking your kids these questions to help them think further about the topic:

Which Tudor games do we still have today?

What are the main differences between Tudor football and football today?

Would you have banned bear baiting? What about football?

Why did the King need to be a good sportsman?