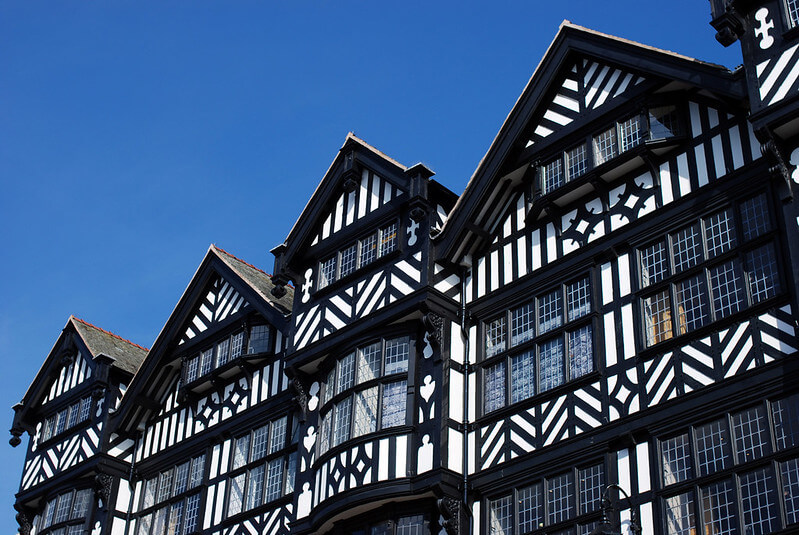 An important part of the KS2 curriculum, the Tudor period ran from 1485 until 1603, a time when the Tudors were the Kings and Queens of England, starting with King Henry VII before Henry VIII took the throne in 1509.

There are lots of Tudor houses that are still standing in England, many of which are still lived in, especially in the town of Lavenham in Suffolk. These houses are famous for their black and white effect, which is created by the 'black' of the timber frame and the 'white' of the painted walls.

You can spot a Tudor house by its distinctive black and white appearance. Tudor buildings were made from dark wooden timber frames, which were left exposed or on view, and the walls in the Tudor period were filled in with a material called 'wattle and daub'.

Wattle and daub is a method of making walls and buildings that has been popular around the world for more than 6000 years. The 'wattle' describes a woven lattice made of sticks or strips, which is 'daubed', or covered, with dung or clay, and painted white. The 'daub' is made of a combination of clay, sand, animal dung, wet soil and straw. The wattle and daub would be used to fill in the gaps between the timber frame to make a water-tight and insulated home.

The wooden frame would be held together with wooden pegs rather than metal nails, and other elements of Tudor architecture include decorative half-timbering, a steep roof, striking cross gables, a tall chimney and an enclosed fireplace. Tudor style roofs were most often made of thatched hay, however, the rich preferred a tiled roof.

During this time in the 15th century, glass was expensive - and so only the rich could afford to have glass windows. If people had to move homes, they would often take their windows with them to the next house, and because they were so expensive, windows were often very tall and narrow in design. You can spot Tudor houses because of their latticed windows, which are created by joining lots of small panes of glass together with strips of lead, which looked decorative and pretty.

Inside Tudor housing, there were very few luxuries or home comforts. Often the houses would have dirt floors. People would cover their dirt floor with rushes or reeds, which they would replace when they had become too muddy, and although the rich loved buying carpets and rugs, they would more often hang these on the walls rather than put them onto the dirt floor.

Tudor furniture was not particularly comfortable - made in heavy oak, people sat on benches and stools rather than ergonomic chairs, though often this heavy furniture was ornately carved.

Even the rich did not necessarily have a toilet in the house; the Tudors called the toilet a 'privy', though there was not a lot of privacy. The toilet in a castle would only have been a raised hole in the floor that was situated about the moat. For those who were not incredibly rich, the privy was simply a wooden toilet seat set on top of a bowl.

Tudor homes would be lit with beeswax candles if you were very rich, otherwise, Tudor homes were lit with candles made of animal fat or tallow. The very poor Tudor people would use 'rush lights', which were rushes that had been dipped into animal fat.

The garden was very important to the Tudors, the richest of whom preferred to have a very large garden filled with fountains, mazes and hedges carved into elaborate shapes, such as animals. Perhaps the most famous Tudor garden is Hampton Court, Henry VIII home in the outskirts of London.

What is wattle and daub?

What is the 'black' of the black and white Tudor houses?

What did the Tudors use to light their houses?

What was the flooring in Tudor houses?

Where did Tudors put their carpets and rugs?

Where can you go to see Tudor houses now?