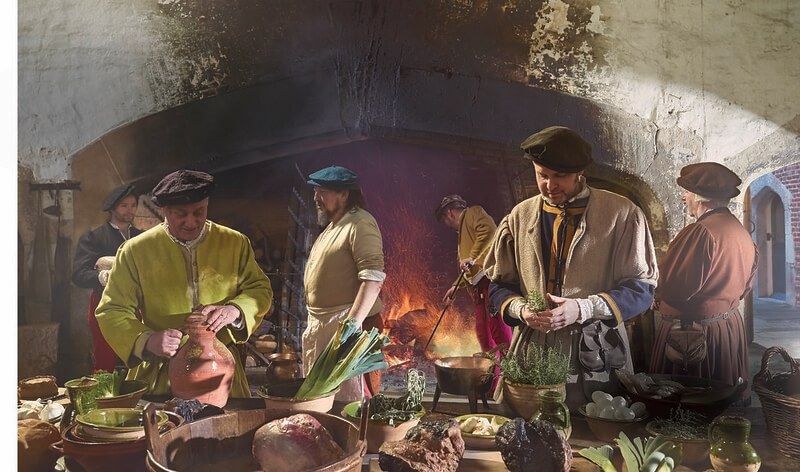 Whether a person living in Tudor England was rich or poor had a significant impact on what they could eat or drink.

The Tudors were very concerned with the idea of a well-ordered society: they introduced laws to separate the rich nobles from the poor workers. This determined what food people could access and afford.

The food that people ate was also affected by the time of year: usually, it was seasonal and fresh as it was very difficult to store. Tudors would preserve their food by pickling or salting it, and seasonings or spices were used by wealthy families to disguise any low quality. The more exotic the spice was, the more it showed off the household’s wealth.

Let’s look at the kinds of food that the Tudors ate.

Rich Tudors were heavily reliant on meat: their diet was about 80% protein! Meats such as chicken, pheasant, wild boar, and pig were eaten frequently, and peacock, swan, and badger would appear at banquets. Meat was roasted on spits over a fire or slow-cooked in an iron box that was placed in the ashes.

Wealthier Tudor landowners ate lots of fresh meat as they could keep more animals on their estates, but it was also preserved for the winter months by salting, smoking, or drying. If the meat was dried, it would be hung from the ceiling in order to improve its flavour.

By King Henry VIII’s reign, the price of meat had fallen so that the average family could afford either stored or preserved meat. Poorer people were also encouraged to eat chicken that they could rear themselves, as well as beef from local markets or rabbits that they caught.

Fruit and vegetables were highly seasonal food. Vegetables such as cabbage, leeks, and parsnips were common, as were fruits like apples, pears, and plums. Fruits were sometimes preserved in syrups to make them last longer, and wealthy houses often had herb gardens containing herbs like parsley, rosemary, and sage.

In the late Tudor period, potatoes and tomatoes were brought over from the Americas and enjoyed popularity amongst the richer classes, who served them at banquets as a symbol of their wealth. Otherwise, vegetables were not favoured by the nobility: they were seen as food for the poor. Turnips, for example, had been popular at the start of the Tudor period, but were considered food for cattle by the end.

Pottage was a cabbage soup eaten by all. If eaten by the poor, it was served with bread, but if the rich ate it, they made it more exotic with spices like ginger or saffron.

Rich people would eat bread made from white or wholemeal flour, whereas poorer classes ate bread milled from rye flour – or sometimes even acorns!

Those living by rivers or the sea ate fish such as eel, perch, and trout. A lot of fish was consumed over the period of Lent, when foods like butter, eggs, and meat were forbidden.

Sugar was rare and expensive as it could not be grown in the UK. Honey was more often used as a sweetener, and desserts consisted of gingerbread, sugared almonds, and preserved fruit.

Desserts were therefore more frequently eaten by the rich, as sugar was such an exotic expense. At banquets, giant centrepieces were prepared from marzipan and spun sugar, and shaped into hunting scenes or giant structures like castles and cathedrals. This was a demonstration of the great wealth of the banquet’s host.

Water in the Tudor period was contaminated, so it was healthy for neither the poor nor the rich to drink. Instead, the poor drank ale and mead, and the rich drank wine, which was sometimes served warm and spiced. Hippocras was an expensive, sweet, spiced liquor from Cyprus and would be served only at banquets.

2.) Tudor courtiers selected their meals from a variety of dishes, eating around 5000 calories a day.

3.) Only the monarch ate with a fork, which was used to serve, cook, and carve. Everyone else used a spoon and a knife, as forks were only introduced as an everyday item from the 17th century.

1.) Which Tudor food would you have liked, or disliked, to eat?

3.) What were two factors that affected what a Tudor ate or drank?