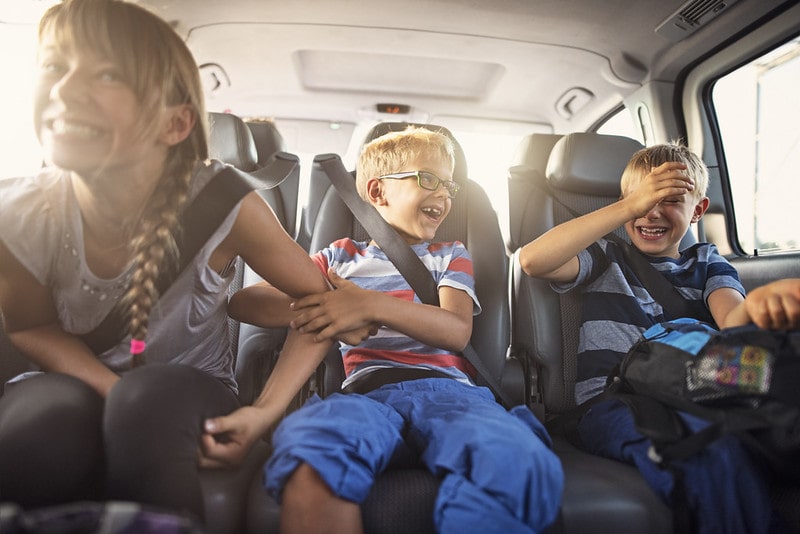 Off on a road trip with the kids and want to pass some travel time?

We’ve scoured the internet and found 35 kid friendly jokes, all about travelling, from funny Knock Knock Jokes to tricky brain teasers, these jokes will have the kids chuckling from start to finish. So, buckle your seatbelts and let’s go!

Let’s warm up with some super silly question and answer jokes about travelling we know the kids will love!

1) How can you tell elephants love to travel? Because they always pack their own trunk!

2) Where do sharks love to go on their holidays? Finland!

4) Why did the witch stay in a hotel? Because she heard they had great broom service!

5) Where do hamsters go on their holidays? To Hamsterdam!

6) What do you get when you cross a plane with a magician? A flying sorcerer!

7) What happens when you wear a watch on a plane? Time flies!

9) Why did the librarian get chucked off the plane? Because it was overbooked!

10) Why are mountains the funniest place to travel to? Because they’re hill areas!

11) What do you get when you cross a snake with a plane? A boeing constrictor!

12) What country has the most germs? Germany!

13) Where is a teachers favourite holiday destination? Times Square!

14) How can you tell a train just went by? You can see its tracks!

15) What happened to the man who took the five o’clock train home? He had to give it back!

16) Why is that train engine humming? Because it doesn’t know the words!

17) If you’re on a road trip and you see a fork in the road, what should you do? Stop for lunch!

18) What did the doctor say to the man who was sick at the airport? It’s a terminal illness!

19) Where do pepperonis go on holiday? The Leaning Tower Of Pizza!

20) Where do bees go on their holiday? Stingapore!

21) Why is Peter Pan always flying? He Neverlands!

22) What is the most popular chocolate sold at airports? Plane chocolate!

23) What did E.T’s mother say to him when he got home? Where on earth have you been?!

Fan of a knock knock joke? Drive the kids round the bend with our collection of funny travel jokes.

Here are some brilliantly funny travel puns for kids!

28) I’ve always wanted to travel to Finland...but I’m afraid I might disappear into FinAir!

29) A time traveller went to a restaurant and had the best meal he’d ever had... he liked it so much he went back four seconds!

The kids will need their thinking caps on to solve these tricky little riddles and brain teasers!

30) What travels the world but stays in one corner?

31) What goes through towns, up hills and down hills but never moves?

32) What state in the U.S is round at the ends and hi in the middle?

33) What can you find in Jupiter, Mercury, Mars, Earth, but not Neptune or Venus?

34) A bus driver was heading along a busy road, went the wrong way down a one-way street, he went past three stop signs but didn’t stop, and he spoke to someone on his mobile phone. But the bus driver didn’t break any laws - how was this?

The bus driver was walking, not driving!

35) What is the capital of France?