The 39 Best Basketball Jokes For Kids 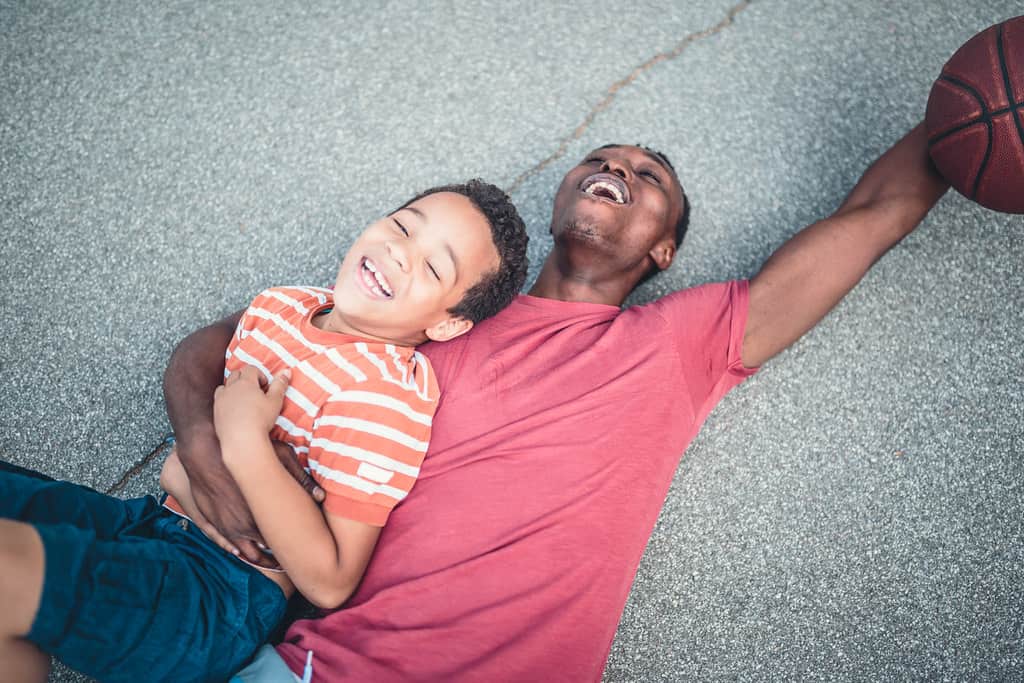 Basketball is one of the most popular sports in the world, as well as being a brilliant sport it is also a pretty funny topic for jokes, and we have 39 jokes all about basketball that the kids will love!

Here’s A Fun Fact For You: Did you know that when basketball was first played you weren’t allowed to dribble the ball? The moment a player caught the ball they had to throw it to another player, it wasn’t until 1897 when dribbling became part of the game!

Whether your kids are basketball fanatics or they just love a good old giggle, they’ll love these basketball-themed jokes. From question and answer jokes and knock-knock jokes to tricky riddles and brain teasers, we’ll have them rolling around in balls of laughter in no time!

These funny basketball jokes will have the kids jumping through hoops!

1) Why did the basketball team join a craft club? Because they wanted to learn how to make baskets!

2) How do basketball players stay cool during a game? They stand near the fans!

3) What do you do when you see an elephant with a basketball? Get out of the way!

4) Why can’t you play a fair game of basketball in the jungle? Because there’s too many cheetahs!

5) Where do point guards take their girlfriends to dance? Basket Balls!

6) Where is a basketball players favourite place to eat? Dunkin’ Doughnuts!

7) What’s the first meal of the day called for basketball players? Fast Breaks!

9) Where do basketball players get their uniforms from? New Jersey!

10) Why are frogs so good at basketball? Because they always make jump shots!

11) Why couldn’t the basketball player listen to his music? Because he was a record breaker!

12) What’s the difference between someone who hogs the ball and time? Time always passes!

13) Why are basketball players messy eaters? Because they’re always dribbling!

14) Why do basketball players love cookies? Because they love to dunk them!

17) Why can’t you play basketball with pigs? Because they always hog the ball!

18) What’s the difference between a Labrador and a basketball player? One drools and the other one dribbles!

19) What have scrambled eggs and a losing basketball team got in common? They’ve both been beaten!

20) Why did the coach kick Cinderella off the basketball team? Because she kept running away from the ball!

21) Why did the basketball player go to prison? Because he shot the ball!

22) What are basketball players favourite type of stories? Tall Tales!

23) What do the basketball players say when they miss a basket? Shoot!

24) Why are babies good at basketball? Because they’re always dribbling!

25) Why was Cinderella never any good at basketball? Because her coach was a pumpkin!

Ready for some brain teasers? See if the kids can solve these basketball riddles!

26) A man throws a basketball as hard as he can. There is nothing in front, behind or either side of him but the ball comes back and hits him in the face. How can this be?

He threw the ball straight up in the air!

27) Why wouldn’t the basketball team play with the third basketball?

Because it was an oddball out!

28) Bob’s basketball coach has five players: four are named Koko, Momo, Lolo and Jojo. What is the fifth player's name?

29) Two basketball teams play a game. The home team wins, but not a single man from either team scored a basket. How could this be?

It was a women’s basketball team!

31) How many players are on the basketball court for each team in the NBA?

32) Look at the following list of sports carefully: golf, darts, tennis, cricket, football, badminton. Which of these sports should come next on the list: archery, boxing, squash, basketball or baseball?

Basketball because it has 10 letters and the sports are listed in order of how many letters they have!

Let’s finish off with a slam dunk! These knock knock jokes about basketball will really set them off!

Canoe come over and play basketball with me?

Dozen anyone want to come and play basketball?

Take meow to the ball game!

Keep Uriah on the ball!