41 Tennis Jokes For Kids That Are Ace 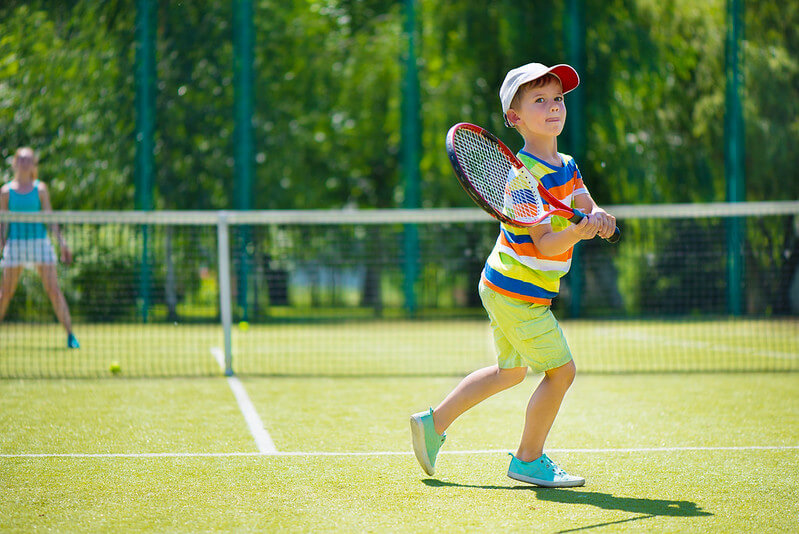 We've put together a list of tennis one liners, knock knock jokes and question and answer tennis jokes to fill your summer household with giggles.

Let's start with a few fun tennis facts to begin the match!

-Tennis courts were originally an hourglass shape until 1875, when the rectangular courts were brought in for the Wimbledon tennis tournament.

-Tennis players can wear all sorts of exciting tennis gear when playing in tournaments, but for Wimbledon they must wear traditional white tennis clothes.

-An average of 42,000 tennis balls are used during a single year of Wimbledon!

-The tennis balls are bright neon colours so they can be clearly seen during the tennis match.

-There are four very important tennis tournaments, these include Wimbledon, the US Open, the Australian Open and the French Open.

-Tennis is scored in an unusual way, as to win the match you have to be the first tennis player to get four points. Zero points is called 'love' , first point is '15' then '30' and finally '40'. If both players are on the same score this is called 'deuce'.  Learn more about tennis here.

So, let's get going and have a ball, a tennis ball, with these tennis jokes!

We hope your mini tennis player raises a racket with these hilarious tennis knock-knock jokes!

You're stringing me along.

Tennis is five plus five!

Annette in the middle of a tennis court!

7) Tennis is like waiting tables. The first serve is the most important thing to get right.

8) They should change the scoring system, but the sport doesn't see the point and is set in its ways.

9) You're so mean about my tennis strokes. I won't hear anymore of your backhanded compliments.

10) Continental: My favourite type of breakfast and tennis grip.

11) The best time for a game is around tenn-ish.

12) The neon green ball came towards me. I swung for it and then all I could see was fuzzy.

13) Two racquets started dating. Unfortunately, one was stringing the other along.

14) My neighbour hates tennis because he says it makes too much racquet.

15) Backhanded compliments was the reason the tennis player didn't get any dates.

16) The one animal that won't play tennis is a fish because they won't go near the net.

17) If someone asks me what comes before tennis I say say nine-ish.

18) When tennis players stop playing tennis they go to Volley-wood.

20) I think tennis is great because you live just once but in tennis you can serve twice.

21) Why is it not a good idea to date a tennis player?

Love means nothing to them.

22) Where did the tennis player go to become a famous singer?

23) Why does Cinderella always lose at Tennis?

Because her coach was a pumpkin.

24) What did the bar man say to the tennis ball when he walked into the bar?

Are you being served?

25) What to you call a silent game of tennis?

Tennis without the racket.

26) What did the tennis coach call his daughter?

27) How can you tell how much tennis rackets cost?

Calculate their net worth.

29) What's the girl in the middle of the tennis court called?

Fish. Because they can't get close to the net.

31) How many tennis players does it take to change a light bulb?

None. None of them will admit that the bulb was out.

32) Why was the tennis court so loud?

Because all the players raised a racket.

33) Where do people that play tennis go on a date?

34) Where do ghosts play tennis?

On a tennis corpse!

They had problems with their server.

What's all that racket?

38) What was Serena Williams’ favourite number?

39) What time does Roger Federer go to bed?

40) When does an English tennis match end?

41) Which state in American has the most tennis players?