74 Tea Puns That Are Unbe-Leafably Funny 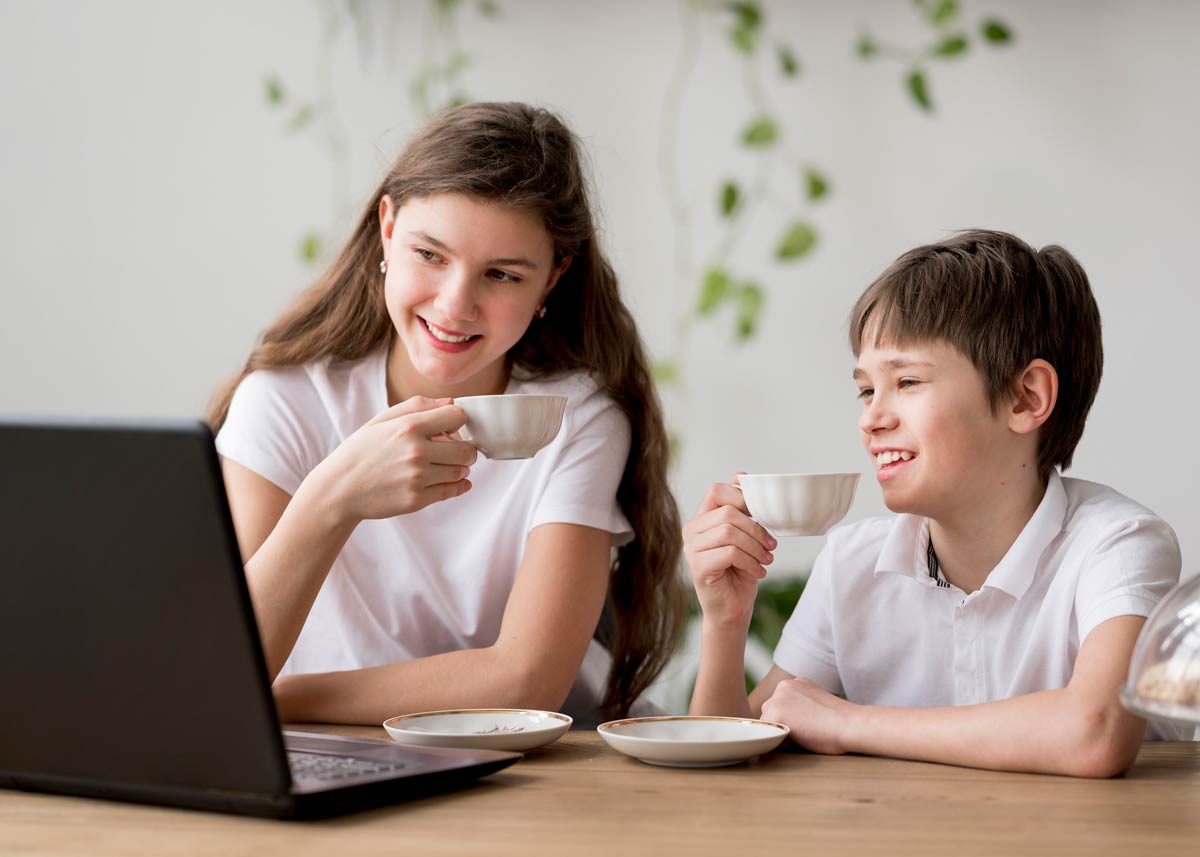 From matcha puns to tea party jokes and cracks about safe-tea, our list of tea-riffic puns will give any tea lover a laugh.

It's up to you how you like your tea: black, green, white, Pu'erh, Ceylon or matcha, with milk or without. But there is one thing we do know about your taste in hot beverages, and that's that at least a couple of these jokes will be your cup of tea.

A bit like cat people and dog people, people often say they're a tea person or a coffee person. If you're one of the latter, you might want to check out of list of coffee puns as well. However, we've got good news for anyone who's a tea drinker: recent studies have suggested people who drink tea live longer, healthier lives than people who don't. It's also been suggested that drinking tea makes people more creative (it boosts their creativi-tea)! No, seriously, scientists think the caffeine content in black tea can help with alertness and increased creative thinking, while green tea is well known for its health-boosting proper-teas.

If you're looking for good tea puns, we've got plenty. Pull up a chair, brew a cup of your favourite leaves, and take a scroll through our list of hilarious puns about tea.

For more laughs, why not take a look at these dairy puns? The perfect accompaniment to a cup of tea!

The funniest tea puns we could find, all gathered together under one handy heading.

1. I went to a tea meditation yesterday. There was a real atmosphere of tranquili-tea.

2. Coffee's dangerous, but tea is not. It gives you a sense of safe-tea.

3. I dropped my wallet last night. The cashier at the tearoom gave it back. Some people have so much hones-tea.

4. This teabag got mad that its friend got brewed first. I told it to stop being sal-tea.

5. This bag of leaves is a successful college professor. It got tenure as facul-tea.

6. This teabag keep jumping out of the pot. It's being feis-tea.

7. A teabag's college friend told her a longwinded story about people she didn't know. "Cool story, brew," she said.

8. The hipster burned his tongue. He drank tea before it was cool.

9. I went into the kitchen last night and heard all this noise coming from the tea caddy. There was a tea party going on.

10. I picked up my friend's coffee by accident then put it back. It wasn't my cup of tea.

The Funniest Jokes About Tea

People who like to drink tea will find plenty to laugh at in this list of pun-tastic tea jokes.

11. What kind of dinosaur hangs out in coffee shops? A Tea-rex.

12. What do you call a Queen's infused leaf beverage? Royal tea.

13. What do you call it when you put off doing your homework to get another tea? Pro-caffeine-ating.

14. Why did the teapot get detention? It was being naugh-tea.

15. Why did the tea get mistaken for toothpaste? It was min-tea.

17. What do you get when a teabag meditates? Sereni-tea.

18. What political party gets everyone's vote around 4pm? The tea party.

19. Why did the teacup get fired from the palace? It kept spilling the royal tea.

If you've ever wondered if there's such a thing as a green tea pun, look no further. Here are some puns about green tea.

20. Why did the coffee tell the matcha to be quiet? He was being too chat-tea.

21. How did the yerba maté become a famous motivational speaker? She was full of positivi-tea.

22. What did the green tea say when its friend asked why it hadn't got a birthday card? "But I Sencha card already."

23. Why was one teabag jealous of the other? It was green tea.

24. A cup of yerba became a sailor. As it came aboard the ship, the captain shouted, "Ahoy, ma-tea!"

25. Some coffee and some tea had an argument. The green tea walked away, but the boba decided to milk the situation.

26. This South American green tea was brewed by an angel. It's a matcha made in heaven.

27. The tea wanted to buy its mom a gift, so it went into a florist. "Bancha flowers, please," it said.

We've listed the funniest chai jokes we know on this list of spicy wisecracks for anyone who likes to drink tea.

28. The server at the tea shop got a bad review. The boss said he needed to chai harder.

29. A new customer wasn't sure whether she'd like the spicy tea. The barista said that if she never chai'd, she'd never know.

30. The chai's been grumbling about how long the kettle takes to boil. It finds the waiting very tea-dious.

31. I got to school today and found a cup of chai at the front of the classroom. It was the substitute tea-cher.

32. The chai, the matcha and the oolong were all making fun of the pu-'er. I told them not to teas-e it.

33. Why didn't the tea introduce itself at the party? It was a little chai.

34. What's the difference between a hot spicy drink and an exercise class? One's chai tea, the other's Tai Chi.

There's sure to be a perfect tea pun in here for any tea drinker.

36. Why does no-one tell the teapot any secrets? It always spills the tea.

37. Why did the teabag call the cops? She got mugged.

38. What does a cup of tea get when it falls over? Brew-ses.

39. What do you get if you tell tea it's coffee? Perplexi-tea.

40. What does a teacup wear to homecoming? A tea-ara.

41. What do mixed tea leaves do in a crowd? Try to blend in.

42. Why are tea leaves always grounded? They're forever getting in hot water.

43. What do you call it when tea leaves take art classes? Creativi-tea.

44. What did the tea leaf say to his partner? Tea amo.

We won't "leaf' you alone til you've heard these tea jokes.

45. That was the best cup of tea ever. It was mug-nificent.

46. The tea comedian made some really awful jokes. It caused a brew-haha.

47. A new barista started at the tea shop. There have been a lot of tea-chable moments.

48. The tea leaves have all got together to organise the cupboard and polish the tea caddy. It's been a real communi-tea effort.

49. The tea got caught stealing by the cops. He promised to turn over a new leaf.

50. The tea leaves thought it was very unfair when they woke up tied to a line in the hot sun. They'd been hung out to dry.

It took us a while to brew these ones up.

51. What did the tea leaf's mom say at bedtime? Steep tight.

52. Why did the infuser break up with the tea leaf? Their relationship was strained.

53. What did the teabag say when he got put back in the water? That was a steep too far.

54. Why did the teapot always win in raffles? Pot luck.

55. The teapot sent a Valentine to the tea leaf. He said she was brew-tea-ful.

56. The teapot started an office job. It was hanging out in the break room when a colleague asked for hot water. "I don't urn enough for that," said the teapot.

58. A teapot became a movie critic and all the directors are terrified him. He's absolutely brew-tal.

59. This hillside is covered in people drinking tea. It's a very steep slope.

60. They want to throw out the big tea pot, which is very sad. Samovar best teas come from that urn.

From Earl Grey to Pu'erh and Oolong, all our favourite varieties of tea have made it in here.

62. What tea changes colour depending on the background? Chamomil-eon tea.

63. What did the tea leaf say when the kettle finally boiled? That took a very Oo-long time.

64. Why wasn't the Darjeeling a morning person? It was afternoon tea.

65. Why couldn't the tea leaf afford groceries? It was Pu'erh.

67. What did the tea leaves say to the coffee grounds when they were stuck? Help Assam'd we'll help you.

68. Why do Marxists hate Earl Grey? Because proper-tea is theft.

69. Where do tea leaves get their hair done? The hair Ceylon.

70. My friends were arguing about what to order at the tea shop. I asked if we couldn't all just all just get Oolong.

71. The tea leaf's friends got it a birthday present. "Don't Pekoe it'll ruin the surprise," they said.

72. The smoky tea said it would run every day for a week. By day two, it was already Lapsang.

73. The tea dad ran out of spices when he was cooking. He told the little tea leaves to run Oolong to the grocery store and buy some.

74. There's water and tea leaves falling from the sky. It's raining and Pu'erh-ing.

Here at Kidadl, we have carefully created lots of great family-friendly jokes, puns and riddles  for everyone to enjoy! If you liked our suggestions for tea puns, then why not take a look at our list of boba puns that are just hilarious, or for something different take a look at these tree puns and jokes that are unbe-leaf-ably funny.