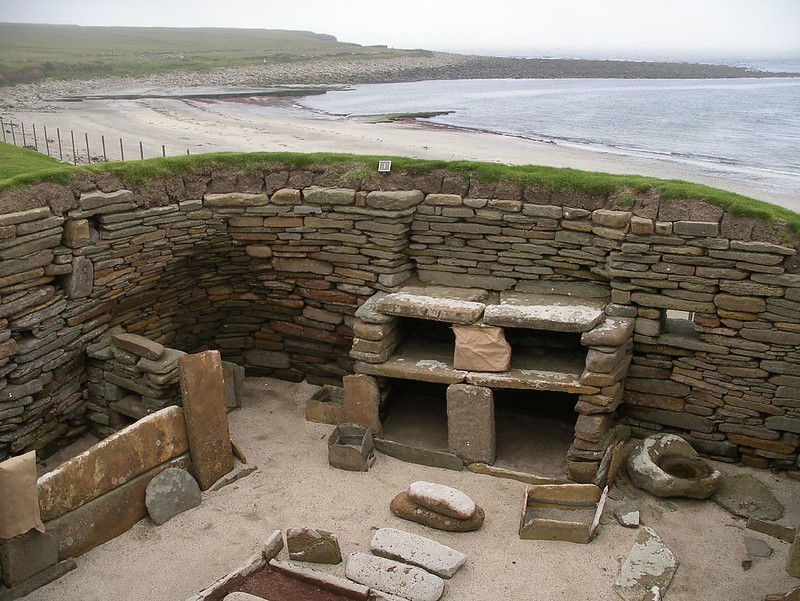 Skara Brae may not ring any bells just yet, but once you have read this fact file, the bells will be chiming with great Skara Brae knowledge!

The KS2 History curriculum follows the history of Britain, beginning firstly with the Stone Age. Skara Brae is particularly important when studying this era and our fact file will help you understand why.

Perhaps these facts about Skara Brae may even spur on a last-minute road trip to the famous village to bring your Stone Age facts to life.

What Is Skara Brae?

Skara Brae, Orkney, is a pre-historic village found on an island along the North coast of Scotland, situated on the white beach of the Bay of Skaill. It is an archaeological site that was rediscovered in 1850, during an extremely strong storm. This uncovered eight different houses, all joined together by passageways, which were inhabited for over 600 years by the Skara Brae people.

The settlement was abandoned in 2500 BC but nobody knows why! There are many theories to suggest why the Skara Brae people left their settlement, however, there is evidence to say they may have left gradually. Its inhabitants relocated elsewhere, leaving behind a physical depiction of Skara Brae facts and a wonderful exhibition for young history students.

The land of Skara Brae is now owned by the Laird of Breckness of Shaill House.

How Old Is Skara Brae?

Skara Brae was originally built many years ago, between 3000 BC to 2200 BC, in a period known as the 'Neolithic period'. This is more commonly named the Stone Age. The village is older than Stonehenge and even the Great Pyramids, so it is definitely an interesting place to study!

It was only rediscovered in 1850, so for many years, this extremely important village laid undetected. With the strong winds and bad weather conditions, the earth, wildlife and sand that had been covering these houses were removed. This revealed the ancient settlement and unearthed a wealth of information about the Stone Age period. A team of archaeologists were led by one man, William Watt, to excavate this amazing village. Originally, they believed they had discovered an Iron Age settlement, but they soon proved themselves wrong.

Many years later, in 1926, yet another storm hit and uncovered even more of the settlement that had been preserved. Following this large storm, a sea-wall was constructed to protect the area, which revealed even more artefacts and evidence from the Stone Age.

Why Is Skara Brae Important?

Skara Brae is one of the most successfully preserved Neolithic settlements in Europe. Due to the sand that covered the settlement, the area was kept in an extremely pristine condition for over 4000 years. The excellent condition of this village has given us extensive insight into life in Britain during the Stone Age. The houses were in such pristine condition that furniture from the period was recovered, along with other artefacts. These are important clues to understanding the Neolithic lifestyle and culture.

The houses were built in a circular shape, made from stone. Each house consisted of only one room,  a large square shape, with specific 'fitted furniture'. This included two beds, a fireplace, one set of drawers opposite the doorway and small tanks within the floor. Each house was made with 2.5-metre walls and connected by covered passages. Archaeologists believe that the roof would have been made from straw or materials like this.

What Do We Know About The Stone Age Since Finding Skara Brae?

From the artefacts discovered, archaeologists have found that the people of Skara Brae were excellent farmers. Before the Neolithic period, people simply hunted animals and foraged wild fruit. However, the evidence here suggests that the people of Skara Brae grew wheat, they reared animals for farming and also hunted for fish in local rivers. They had developed hugely!

They did not find evidence of any weaponry in Skara Brae, so it highly likely the people did not fight and were a very peaceful population. This seemed a very enjoyable place to live, as the artefacts also found a huge number of jewellery, ornaments and dice- suggesting that they were party people!

Some of the objects discovered at Skara Brae include:

These artefacts are stored in the visitor centre at Skara Brae, so you could browse everything they found in 1926. Some can also be found in the Orkney Museum and Stromness Museum.

What Will Happen To Skara Brae Now?

Having been named a UNESCO World Heritage Site, Skara Brae is protected and preserved. However, the area is greatly exposed to the elements, and at severe risk of coastal erosion. The sand is a big threat to the buildings. There is also an additional human threat as the number of visitors to the area has increased over time. Measures are being taken to reduce any damage.

Skara Brae is definitely a place to visit... we just have to be sure to take every step we can to protect it!