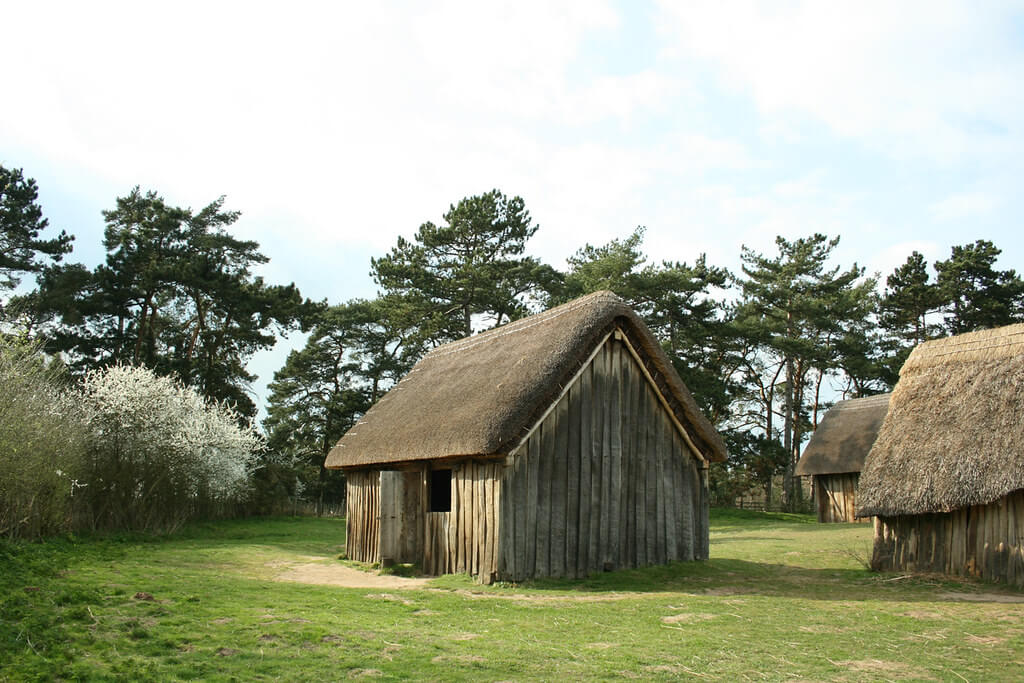 Anglo-Saxons - not as famous as the Romans, but nevertheless an important part of British history.

As part of their history studies in KS2, children must learn about the Anglo-Saxons and discover more about their houses and their way of life. Our easy guide will help you find out more, and learn some fun facts.

Anglo Saxons lived in England from the 5th century (400AD onwards). Anglo-Saxon refers to the Germanic tribes who came to Britain from continental Europe, their descendants and the native British people who took on the Anglo-Saxon language and way of life.

The Anglo-Saxons have left us with lots of reminders of their time in England. See if there are any towns or villages near you that have Anglo-Saxon names. If a place name ends in ton, lee, wick, hamm, worth or bury, that is an Anglo-Saxon name.

The Anglo-Saxons were around from the 5th century until 1066, after the Romans but before the Normans. They did not want to adopt the Roman way of life, so the villas, streets, baths and towns built by the Romans were forgotten and fell into ruin.

While Romans had stone or brick houses with tiled roofs, underfloor heating and even glazed windows, the Anglo-Saxons houses were far more primitive.

Anglo-Saxon houses looked like tiny, basic country cottages. They were made of wood - luckily England was covered in forests at that time, so there were plenty of building materials for them! The wood huts were square or rectangular and had pitched roofs that were thatched with straw. Sometimes, the house would be dug down into the ground, and these huts would have a roof that would go right over the hut, touching the ground.

Although most houses were wood, their churches were made of stone and there is evidence that homes of important people were also built out of stone.

These huts were very different to the houses we know now. They consisted of just one room, which was used for everything from cooking and eating, to sleeping and having friends over. They even kept their animals in them.

There were no windows, just slits in the wood, so the houses were built where they would get maximum light and heat from the sun.

In the middle of the one room, was a fireplace. The smoke from the fire would escape through a hole in the roof.

Saxon homes had a wooden floor, which would have rushes strewn on it,  and furniture would have included, chests, a bed, table and folding iron chairs. They would sit on benches to eat, and hang tapestries on the wall to keep the one room warm.

Anglo-Saxon villages were quite small - there would be less than 100 people living there, and often far less. The biggest house would belong to the village chief, who lived in a hall, which he shared with his warriors, and sometimes cattle! Not all huts were homes, they might be used for making pottery and weaving.

Some Anglo-Saxon villages were built inside the walls of Roman towns. if not, the village would be protected by a tall wooden fence, which would keep out foxes, boars and wolves.

Many villages were built near rivers because the Anglo-Saxons were known to be good sailors. They would also clear forests to make new fields and build a village.

Near the village was common land for grazing cattle and sheep. They also kept pigs, caught fish and hunted animals for meat and made their own clothes.

They were self-sufficient, making their own household goods and farming equipment from pottery, metal and wood. They also traded for anything they were unable to make, such as glass, they would trade slaves (did you know that the word Briton was interchangeable with the Anglo-Saxon word for slave?) and hunting dogs.

Where To See Anglo Saxon Houses

The Museum of London

Bede Museum at Jarrow Hall, in Jarrow, Tyne and Wear

Ask your kids these questions:

What sort of food do you think Anglo-Saxons ate?

How would they keep warm?

Where would everyone sleep?

Perfect Your Putt At These London Mini-Golf And Adventure Golf Courses
How To Spot England’s Wild Parakeets
Shakespeare For Kids… Via Zoom
65 Best Restaurant Jokes For Kids To Keep Them Entertained
Top 70 Hilarious Moose Puns And Jokes For Kids
Can Your Kids Spot These 8 Curious Buildings From The London Eye?
Similes (KS2) Explained For Parents
46 Of The Best Bat Puns And Jokes For Your Kids
Explore Kidadl