Queen Victoria's Family Tree (KS2): Everything You Need To Know 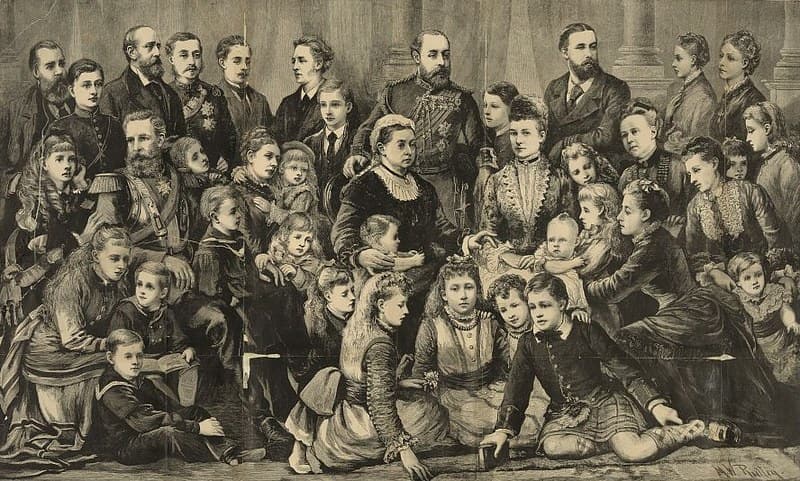 She was Queen of the United Kingdom of Great Britain and Ireland (from 1837 to 1901) and Empress of India (from 1876 to 1901). Queen Victoria's reign was the longest as serving monarch until 2017, when Queen Elizabeth II celebrated her Sapphire Jubilee, which means Queen Elizabeth II spent 65 years on the throne.

Queen Victoria's reign gave her name to a time period, the Victorian Age. Victoria was the last monarch of the House of Hanover. She married Albert of Saxe-Coburg and Gotha, and the couple went on to have nine children. When Albert died, she went into mourning and wore black until the end of her days.

The Queen acceded to the throne at 18, in 1837, when her uncle, William IV died. Queen Victoria's reign lasted 63 years. William IV reigned for seven years.

Queen Victoria has the unusual nickname of “Grandmother of Europe.” Her descendants went on to marry within many different European Royal families, making them all somehow related.

Queen Victoria died on the Isle of Wight, England, in 1901 and her eldest son, Albert, succeeded her on the throne.

Queen Victoria was the only child of Edward and Victoria. The Queen’s father died when she was still a toddler. The strict rules that the future Queen had to follow were called the “Kensington System.” Devised by her mother and her attendant, Sir John Conroy, it was extremely restricting. The young Victoria had to always be with her mother, her tutor or her governesses, she didn’t have any friends and was very rarely allowed outside Kensington Palace.

As a teenager, she only had two “friends,” her half-sister and Sir Conroy’s daughter. The future Victorian Queen occupied herself with studies, and she wrote in her journal every day from her teenage years to her death.

Edward was the fourth son of King George III. He was born in 1767 and died in 1820. He was the first royal to live in North America and the first prince to go to the USA after their independence. Queen Victoria was his only legitimate child.

Victoria, Queen Victoria's mother, was a German Princess, and the sister of the Belgian King, Leopold. She was born in 1786 and died in 1861. She married Prince Edward after her first husband, Charles, Prince of Leiningen died.

Albert and Queen Victoria married in February 1840 at St James’s Palace in London.

Albert of Saxe-Coburg and Gotha was born in 1819 and died in 1861, at only 42. The Prince Consort was the first cousin of Queen Victoria as well as her husband. A lover of science and art, Albert supported social causes such as raising working ages and the abolition of slavery, as President of the Society for the Extinction of Slavery.

Victoria Adelaide Mary Louise was nicknamed ‘Vicky’ by the royal family. She was born in 1840 and died in 1901. She married Prince Frederick William of Prussia and lived in Germany. She went on to become Empress of Germany and Queen of Prussia in 1888.

‘Bertie’ was born in 1841 and died in 1910. He represented his mother the Queen at important events after Victoria went into mourning following the death of her husband in 1861. In 1863, Bertie married Princess Alexandra of Denmark. Bertie became King Edward VII, the King of the United Kingdom of Great Britain and Ireland and Emperor of India.

Alice was born in 1843 and died in 1878, aged 35. She married the German Prince Louis of Hesse and moved to Germany with him, becoming Grand Duchess of Hesse-Darmstadt. She had seven children and learned nursing from Florence Nightingale. Her family was struck down by diphtheria, an infection of the nose and throat. Her youngest daughter died and Alice herself succumbed to the disease in 1878.

‘Affie’ was born in 1844 and died in 1900. He joined the Royal Navy and loved life at sea. He was the first member of the British royal family to go to Australia. Alfred married Grand Duchess Maria Alexandrovna of Russia and lived in London, where he had five children. He became Duke of Saxe-Coburg and Gotha in 1893.

‘Lenchen’ was born in 1846 and died in 1923. She married German Prince Christian of Schleswig-Holstein and had five children. A founding member of the British Red Cross, she was interested in nursing, like her older sister Alice.

Louise was born in 1848 and died in 1939. She married John Campbell, Marquess of Lorne, an unusual move as he was not a Prince, but Queen Victoria approved. When John was made Governor General of Canada in 1878, the couple moved to Ottawa, Canada. She never had children.

Arthur was Queen Victoria’s favourite child! Born in 1850, he died in 1942. A military man, he was a lieutenant in the British Army after graduating from military school. Arthur married Princess Louise Margaret of Prussia and had three children. He became Governor of Canada and moved to the country in 1911.

Leopold was born in 1853 and died in 1884. He attended Oxford University and toured Canada and the USA with his sister Louise. Leopold had health issues: he suffered from haemophilia (which meant he would take a very long time to heal from injuries), as well as epilepsy. Queen Victoria arranged for him to marry Princess Helena of Waldeck-Pyrmont and had two children.

Nicknamed ‘Baby,’ Beatrice was born in 1857 and died in 1944. Her father died when she was only four years old and she had a special bond with the Queen. She became her mother’s personal assistant as a teenager. She married Prince Henry of Battenberg and had four children.

2. Seven assassinations attempts were made on Queen Victoria!

3. Queen Victoria was a lover of the arts. She liked the opera, singing, painting and drawing.

4. Queen Victoria was the first monarch to live at Buckingham Palace.

5. Within her family, Queen Victoria's nickname was ‘Drina.’

6. Our current Queen, Queen Elizabeth II is a great-great-grandchild of Queen Victoria. So is her husband, the Duke of Edinburgh.

7. Queen Victoria was only 5 feet tall!

9. We can thank Albert and Queen Victoria for Christmas traditions like a tree and sending cards. Prince Albert brought these German traditions over to Britain when he married Victoria.