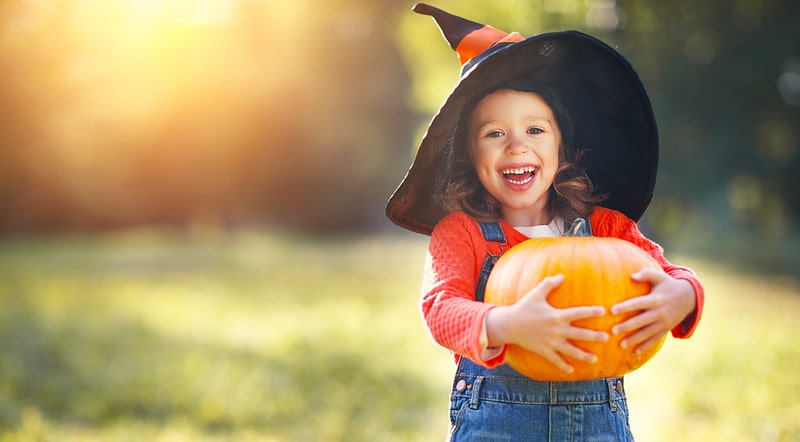 Oh my gourdness, the kids are going to love these pumpkin jokes!

Autumn will soon be upon us which means one thing for the kids- Halloween! And no Halloween is complete without pumpkins! Whether you carve them, make them into a pie, or indulge in a pumpkin spiced drink, pumpkins will be popping up everywhere.

We’ve harvested a crop of pumpkin jokes, so if you’re looking for pumpkin fun you’re in the right place.

Get the kids pumped up with these funny pumpkin jokes!

1) Why was Cinderella not very good at tennis? Because her coach was a pumpkin!

2) What did the pumpkin say when he was asked how he was feeling? I’m vine, thanks for asking!

3) What do you call an autumnal pop star? Pumpkin Spice!

4) Who did the pumpkin run away from? Cinderella’s Fairy Godmother!

5) What day of the week do pumpkins dread the most? Squash-urday!

6) What vegetable does a pumpkin become when an elephant stands on it? Squash!

7) Why were two pumpkins so close together? They had deep roots!

8) What did the pumpkin pie say after a big meal? That was filling!

9) What are jack-o-lanterns afraid of? Things that go pumpkin in the night!

10) What’s orange and faster than a speeding train? Super pumpkin!

11) How do gourds get so strong? By pumpkin iron!

12) What kind of gourd grows on trees? Plumkins!

13) What is black, white, orange and waddles? A penguin carrying a pumpkin!

14) What did the orange pumpkin say to the green pumpkin? Why orange you orange?

15) What did the pumpkin say at the end of Halloween? Good-pie everyone!

16) What do you call a pretty pumpkin? Gourgeous!

17) What did the gardener say when all of his squash went missing? Something pumpkin is going on here!

18) Why did the pumpkin turn red? Because it saw the salad dressing!

19) Who is the leader of all pumpkins? The pumpking!

20) What did the orange pumpkin say to the green pumpkin? You’re looking a bit sick!

21) What do you get when you divide the circumference of a pumpkin by its diameter? Pumpkin pi!

22) When is an orange not an orange? When it’s a pumpkin!

23) What do you say when you meet a big pumpkin with sharp teeth? See you later!

24) How are pumpkins like cats? You’ll find them by the door when you get home!

25) Why did the Jack-o-lantern keep forgetting things? Because he was empty-headed!

26) What is a pumpkin’s favourite sport? Squash!

27) Why did the witch paint her toenails orange? So she could hide in the pumpkin patch!

29) How did the winter squash pay for things? With pumpkin bread!

30) Why do pumpkins sit by people’s doorsteps? Because they have no hands to knock on the door!

31) What is orange and goes choo choo? A pumpkin train-ing!

32) What do you get if you drop a pumpkin? Squash!

33) How do you fix a broken jack-o-lantern? With a pumpkin patch!

34) What do pumpkins eat at the cinema? Pulp corn!

35) Why did the pumpkin cross the road? Because it fell off the wagon!

36) Who helped the baby pumpkins to cross the road? The crossing gourd!

37) What do you call a pumpkin who works at the beach? A life-gourd!

38) What did one pumpkin say to the other? Cut it out!

39) What do you call a pumpkin that plays a lot of sport? A jock-o-lantern!

40) What does a pirate jack-o-lantern wear? A pumpkin patch!

41) What's the best thing to put in your pumpkin pie? Your teeth!

42) Why are pumpkins so bad at tests? Because they’ve had their brains scooped out!

Did You Know? Pumpkins are actually a fruit and not a vegetable! Pumpkins belong to the gourd family which includes watermelons, honeydew melons, cucumbers, and cantaloupe.

Be the pun-king (or queen!) with these clever puns all about pumpkins.

43) Pumpkin spice and everything nice.

44) Let’s give them pumpkin to talk about!

47) Pumpkin spice up your life!

53) You’re the pick of the pumpkin patch!

55) Beauty is in the pie of the beholder.

60) A pumpkin a day keeps the witches away!

Oh my gourd-ness, the kids will love these pumpkin riddles.

When you go out to a patch

Carve it, put in a candle

And then light it with a match

From October to November

You’ll see me about

I’m in lattes and pies, a treat for your mouth!

And carve it right

You’re sure to give

And carve a face

Is where it’s placed.

You surely will not starve

As what’s inside can feed many

And they’re also good to carve.

The more it feeds

Has lots of seeds.

66) I have seeds but I’m not a watermelon

I can be carved but I’m not roast beef

I’m orange but I’m not an orange

I prefer ghosts and ghouls and anything cruel

I can cool you down after the hottest time ever

You can figure me out without having to be clever.

The month of October!

68) I’m tall when I’m young, I’m short when I’m old, and every Halloween I stand inside pumpkins. What am I?

A classic knock-knock joke never fails to raise a smile, and these pumpkin-themed jokes won’t disappoint!

Ice cream, you scream, we all scream for Halloween!

Butter open the door quick, I’ve got to show you my pumpkin!