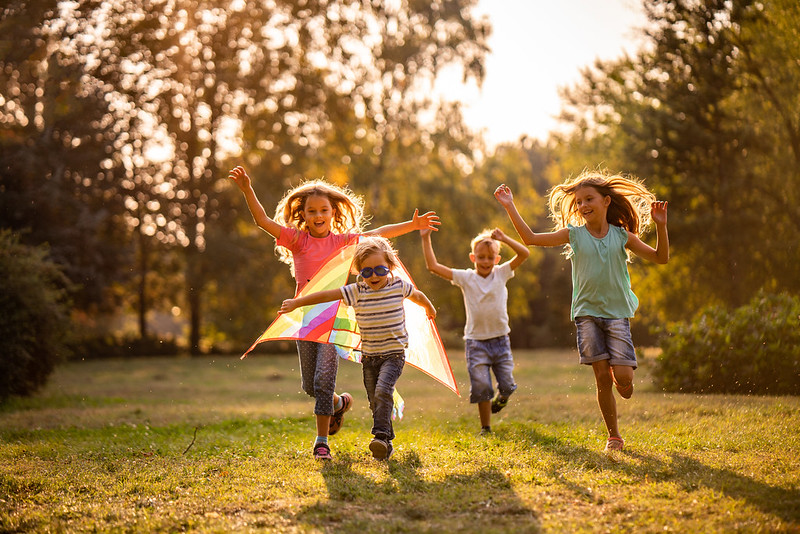 Every household has their favourite.

Perhaps you and your kids enjoy a step in time, after Dick Van Dyke in Mary Poppins, or maybe the magic of Narnia is what transports you. Either way, we've compiled a host of outdoor activities based on kids' films to inspire your clan.

Not only is this Disney song a classic (I challenge you not to keep humming it for the rest of the day), it's also based on an eminently repeatable -- and enjoyable -- activity. All your kids need is a windy day, a kite, and an ideal vantage point.

If you're a Londoner, Primrose Hill is the perfect spot, and may well have been where PL Travers envisioned the Banks family flying their kites in the novel of Mary Poppins. Perhaps avoid feeding the birds though...

Make your own easy kite by downloading the step-by-step guide below!

Calling all lost boys and girls!

Alright, Big Ben might currently be covered in scaffolding (so no visits in homage to the Disney scene where Peter Pan, Wendy, John, and Michael land on the clock's hand), but there are plenty of other Peter Pan-inspired  outdoor fun and games to be had. Head to Kensington Gardens with your family and see if your kids can spot the Peter Pan Statue -- its exact location was chosen by JM Barrie, writer of Peter Pan, who lived close to Kensington Gardens.

Next, head to The Princess Diana Memorial Playground with your best captain's hats and eye patches, and get scrambling over the giant pirate ship. Current opening hours are 10am-8pm with a reduced capacity of 250, and all children must be accompanied by an adult. If you're still in doubt about staying safe, or need advice on what to bring, check out our guide to the new normal at playgrounds here.

JM Barrie's house is also directly across from Kensington Gardens at 100 Bayswater Road: look out for the blue English Heritage plaque.

Did someone say Quidditch?

The popularity of Harry Potter never dims, so much so that many aspects of Potter's magical world have bled into our own muggle one (that's non-magical, for those who don't know). Quidditch -- a game played on flying brooms in the books and films -- is no different.

Okay, so your kids won't be flying 'in real life', but they can follow the rough rules, practice, and protocol of Potter's favourite sport. It makes a great team game -- remember to socially distance -- to be played in a park, with seven players and three different balls. Chasers try to score through three goal hoops with a ball called the Quaffle, and a Keeper guards these goals. Two Beaters attempt to knock Bludgers at the other team (non-violently!) to unseat them, and the Seeker chases the Golden Snitch. In the books/films, the Snitch is a ball, but it could also be a person that the Seeker has to catch, kind of like a (magical) game of tag.

Whilst we're on outdoor activities inspired by the Potter universe, why not jump on your bikes at Waterloo and cycle along the Southbank to the Millennium Bridge? In the sixth film, Harry Potter and the Half-Blood Prince, the Death Eaters (bad guys, basically) use magic to make the bridge wobble dangerously -- a clever pastiche of the real wobble found on the Millennium Bridge when it originally opened.

Visit Southbank Cathedral while you're there, or The Clink Museum, a medieval prison dating back to 1144. Or just soak up the sights of the Southbank and River Thames. Both options are great.

Turkish delight and some lion spotting

Okay first things first, and let's get this out there: does anyone still actually like Turkish delight? I am personally not a fan, but it's a significant component of the second of the Narnia novels (and the first film ) The Lion, The Witch and The Wardrobe, so it's got to be included.

Edmund, the third sibling of the Pevensie family, betrays his three other siblings to The White Witch for some Turkish delight. Drama, action, and family arguments ensue.

Perhaps encourage your kids to follow his youngest sister Lucy's lead instead, and have an outdoors afternoon tea. Sure, Mr. Tumnus won't be there, but they can still create the magic of Narnia without him, or could invite their own soft toys to partake instead.

Lucy and Tumnus ate toast with three toppings (sardines, butter, and honey), but invite your kids to go wild with their picnic planning, and perhaps bake something Narnia-inspired. Cupcakes with whipped white icing, perhaps, to replicate the White Witch's palace, or maybe some lion-shaped biscuits? Turkish delight optional...

If you're London-based, why not host the afternoon tea in Regent's Park and then pop over to ZSL London Zoo to roar at the lions? One of Narnia's best-loved and most magical characters, Aslan, is the eponymous lion of The Lion, The Witch and The Wardrobe: what better way to admire the majesty of these big cats. Be sure to check out our guide to staying safe at reopened zoos whilst you're planning your visit.

The Force is strong with this idea

Have your kids checked out our Jedi approved fun Star Wars craft ideas and made a wrapping paper Lightsaber? Great, they've taken the first step towards induction to the Jedi Training Academy.

Whilst we acknowledge that Star Wars is not specifically a franchise for kids, it has still inspired generations of children to find The Force within. Whether your children see themselves as a courageous Han Solo, a clever Princess Leia, or a skilled Rey Skywalker -- or any of the other weird and wonderful character from the Star Wars universe -- there is someone for all kids to emulate as they ready themselves to become Jedis. All they need (other than a Lightsaber) is outdoor space and a bit of imagination.

Maybe their Jedi Training Academy has an obstacle course in it, to challenge the skill and tenacity of all aspiring Jedis. Launch frisbees (space ships) into a bucket in a test of accuracy; attach string (simulating lasers) to different items and navigate the laser fire; compete in a lightsaber battle of ability. If you have a large garden, you could build an Ewok village among the foliage. The more imaginative, the better!

Don't stop there either! If your kids have any further fun ideas for outdoor activities inspired by films, then great! The more, the merrier.

Perfect Your Putt At These London Mini-Golf And Adventure Golf Courses
Zoos And Animal Parks Near London That Are Now Open
How To Spot England’s Wild Parakeets
Soft Play Centres To Reopen, Along With Bowling Alleys, Ice Rinks And Indoor Theatre
Warner Brothers Harry Potter Studio Tour In Watford Is About To Reopen
The Best Scenic Picnic Spots In London For Families
The Best Waterparks In England, Now Open
Can Your Kids Spot These 8 Curious Buildings From The London Eye?
Explore Kidadl

Look At The View! How To Take Your Family To New Heights This Summer

Bucolic Bliss: How To Do A Family Holiday In The Countryside

Flora Wilson Brown
This is some text inside of a div block.