101 Best Ocean Names For Girls To Inspire You 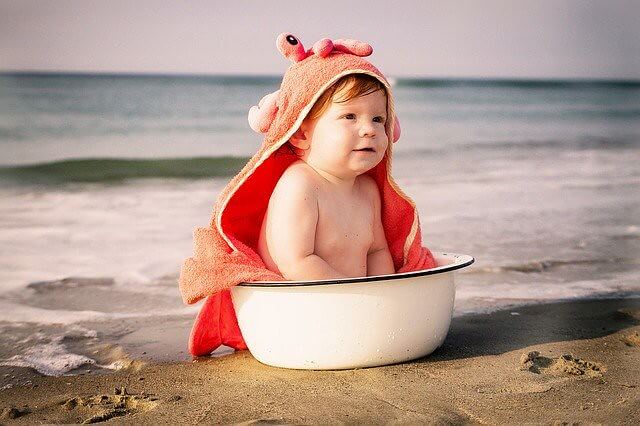 The ocean is full of so much wonder and mystery but ever thought of using it as a source for good girl names?

There are so many amazing baby names inspired by the sea that would make the perfect addition to your family. Find a so-fish-ticated and beautiful name for a baby girl from this list and have your own ocean baby in the house.

Well, water you waiting for?

'Sea' Names For The Ocean

5. Cordelia (Latin and Celtic origin) meaning 'heart' and 'daughter of the sea'.

6. Daria (Persian origin) from the word 'darya' which means 'sea'.

8. Delta (Greek origin) means 'mouth of the river' and is where a river splits before it meets the ocean.

9. Derya (Turkish origin) means 'one who is from the ocean'.

16. Jordan (Hebrew origin) meaning 'one who descends' or 'to flow down'.

21. Maraja (Esperanto language) means 'made of the sea'.

30. Morgana (French origin) meaning 'sea-circle' or 'dweller of the sea'.

33. Oceana (Greek origin) female form of 'Oceanus', the god of the sea.

36. Shui (Chinese origin) means 'she who comes from the water'.

1. Angel (Old English and French origin) usually associated with spiritual beings this is also the given name sea snails have despite being a predatory breed of the species.

4. Coraline (English origin) means 'heart' but is inspired by the semi-precious sea species.

5. Delphina (Greek origin) translates as 'woman from Delphi' but is derived from the word 'dolphin'.

7. Marrus (Norman origin) meaning 'a marsh' and also the name of a unique rocket-like sea creature.

10. Moray (Scottish origin) means 'sea' and is the name for an eel-like predatory fish.

12. Pearl (English origin) produced in the sea it is the birthstone of June.

14. Ridley (English origin) means 'Reed clearing' but is also the name for a small tropical turtle.

15. Rosemary (Latin origin) means 'sea dew' and is also the native herb of the Mediterranean.

Names From The Beach

3. Bondi (Italian origin) comes from the word 'biondo' which means 'blond' but it also the name of a very popular beach in Australia.

7. Haven (English origin) literally means 'safe place' but is also used as a name for a harbour for small boats.

13. Molly (English origin) means 'of the sea' but is also the name for a breed of fish.

15. Muir (Scottish origin) meaning someone who lived on a moor.

19. Shelley (Old English origin) recorded to mean 'meadow's edge' or 'clearing on a bank' and is now strongly associated with the seaside.

Mythical Creatures Of The Sea Name

1. Ariel (Biblical Hebrew translation) means 'lion of G-d' and is the name for The Little Mermaid herself.

2. Asherah (Sumerian origin) meaning 'she who treads on the sea' and is one of the most ancient Sumerian goddess mother figures.

3. Calypso (Greek origin) literally means 'she that conceals' but is the name of a sea nymph in Greek mythology who fell in love with Odysseus.

6. Halcyon (Greek origin) generally known from Greek mythology as a bird had the power to calm the seas.

10. Lorelei (German origin) meaning 'temptress' due to the legend of Lorelei who lived on the rocks and lured fisherman to death with her song.

11. Makara (Indian origin) means 'born under Capricorn' but is also a name of a mystical sea-creature in the Hindu faith.

12. Mazu (Chinese origin) is the goddess of the sea in Chinese culture.

13. Meredith (Welsh origin) has many meaning one of which is 'seal lord'.

17. Nimiane (Old English origin) from the Arthurian legend the name means 'The Lady of the Lake'.

19. Remora (Latin origin) translates to 'delay' from the ancient belief that 'remoras' could stop ships by uttering their name.

23. Ula (American origin) means 'jewel of the sea' and also the name of a precious stone found underwater.

24. Varuna (Ancient Sanskrit origin) the name of a Hindu goddess of the sky and sea who also lives down under.

25. Venus (Greek origin) means 'goddess of love' but in Greek mythology, she rose from the sea.