8 Must-Watch Films For Under 12s 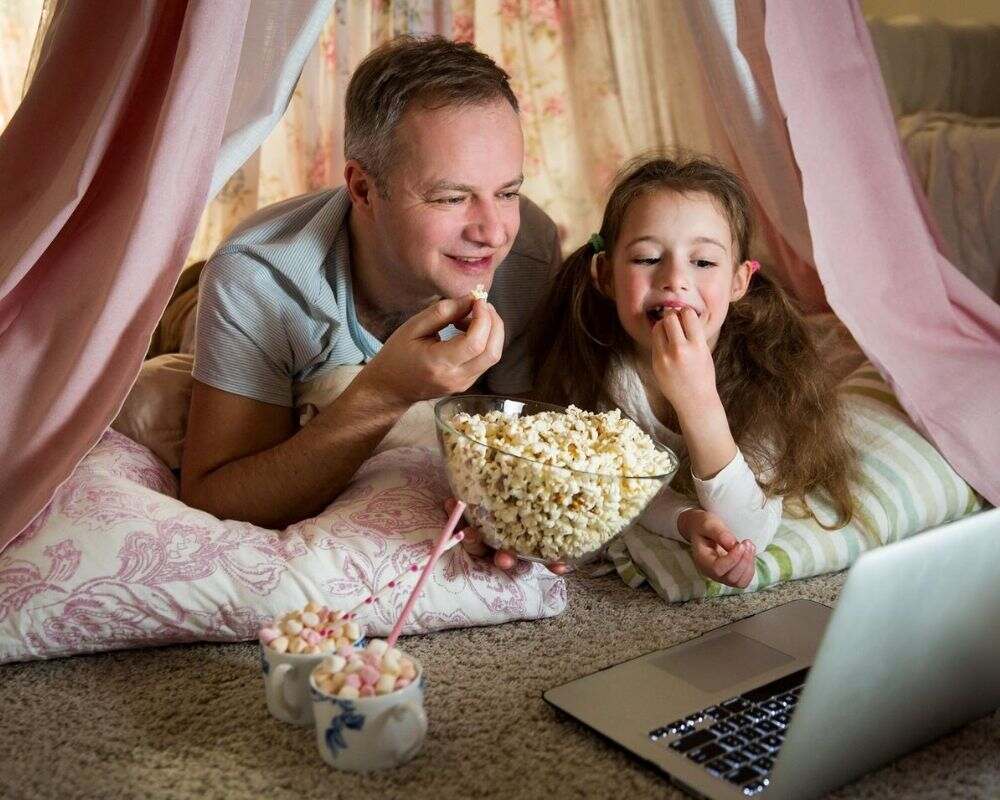 There are hundreds of kids' films out there to choose from but it's difficult to find one that works for the whole family. Instead of trawling through the overwhelming selection of kids' movies on Netflix, we've come up with eight must-watch movies for your under 12s. Ranging from 80s classic movies to hilarious blockbusters, with an animated film or two thrown in,  we're sharing the best family movies on Netflix, Amazon Prime and more. So grab a drink, pop the popcorn and settle down for a cosy film day.

When a young boy named Alan plays the Jumanji board game in 1969, no one could have predicted it would open up a portal to another world and trap him inside the game. Twenty-six years later brother and sister Judy and Peter stumble upon the game and begin to play. They soon realise the game is magical and that they must get past every real-life jungle-themed obstacle Jumanji throws at them in order to reverse the game’s path of destruction, return Alan to his family and get back to normal.

If you love the film, why not stay in the Jumanji world and check out the new 2017 and 2019 versions starring Jack Black and Dwayne 'The Rock' Johnson?

Available on Amazon Prime and Netflix

Recommended for: kids aged 7+ who dream of being a secret agent

The Cortez family seem like they live a normal life, but Ingrid and Gregorio have a secret: before they had children, they used to be world-class spies! When the two of them are captured by evil mutants while on a secret mission, it's up to their children, sassy Carmen and nervous Juni, to channel their parents' spy skills and rescue them. Expect awesome gadgets, strong female characters and even a cameo from George Clooney in this brilliant kids' film.

Spy Kids has just the right of silliness and thrilling adventure to make it a kids' film that the whole family can enjoy.

Recommended for: kids (and adults!) aged 5+ who love silly humour and fairy tales

Meet Shrek; a grumpy, smelly green ogre! When Shrek's swamp is taken over by banished fairytale creatures, he decides to get his home back by making a deal with Lord Farquaad, who is hoping to be king by marrying the beautiful Princess Fiona. All Shrek needs to do is rescue the princess from a dragon-guarded tower and return her to Farquaad, reluctantly letting his new friend Donkey come along. But when Shrek secretly falls in love with the princess, he doesn't realise that she has a secret too...

This animated film flips traditional fairytales on their head and spreads the message of not judging a book by its cover. Filled with twists and turns and a few jokes that'll go over the kids' heads, Shrek is a go-to family favourite for a reason.

Recommended for: fans of fantasy, adventure and comedy aged 6+

It may be almost 30 years old but The Princess Bride is still just hilarious and magical as it was back when it was first released. The film follows a reenactment of a story read to a young boy by his grandfather, all about a farmhand named Westley and his attempts to save his one true love Buttercup from the horrible Prince Humperdinck. Follow Westley's action-packed journey back to Buttercup and laugh out loud at the ridiculous antics he gets up to on his way.

The traditional dashing-hero-saves-damsel-in-distress storyline isn't quite as you'd expect in this unconventional love story, and with a twist at the very end that you'd never see coming, it's well worth a watch.

When Larry picks up a job as a nighttime security guard at The American Museum of Natural History in order to impress his son, the last thing he expects is that every night the museum exhibits come to life! He realises his new job is to make sure the dinosaurs, soldiers, Egyptian mummies and other museum creatures don't cause too much damage, but most importantly, that they are all inside the building when the sun comes up. But with a dark twist unfolding behind the scenes, will he be able to protect his new group of misfit friends?

This family classic is based on the brilliant Roald Dahl story of the same name. Clever, independent and with a newfound ability to move objects with her mind, Matilda is definitely special. In fact, she is so different from the rest of her family that she wonders if they're even related. When Matilda goes to school she and her friends constantly come up against the horrible headteacher Miss Trunchbull, who hates all children! While Matilda secretly works on her powers, will she be able to beat the villain and along the way and find a family who loves her?

A timeless film all about staying true to who you are and standing up for yourself,  Matilda is still no doubt one of the best kids' movies of all time.

Available on Amazon Prime and Netflix

Join the Parr family on this action-packed animated superhero adventure from Disney Pixar. Mr and Mrs Incredible hung up their superhero costumes years ago and now attempt to live a normal civilian life with their three children Violet, Dash and Jack-Jack. They all keep their superpowers under wraps under the government's orders and are mostly successful in living a quiet suburban life. However, when Mr Incredible is lured into a trap by a mysterious villain, his family must join forces and use their own unique powers to help save him.

This kid-friendly Disney Pixar blockbuster is perfect for families who love action, drama and a little bit of thrill. Why not make it a superhero marathon and watch the Incredibles 2 afterwards?

Available on Amazon Prime and Disney+

This timeless Steven Spielberg classic tells the heartwarming story of a young boy, Elliott, and his secret friendship with an alien named E.T, who is stranded on Earth. With the government searching for E.T. every step of the way, Elliott must help his new friend return to his home planet before it's too late.

Whether you're 6 or 86, this story of friendship and loyalty is still one of the greatest family movies of all time.