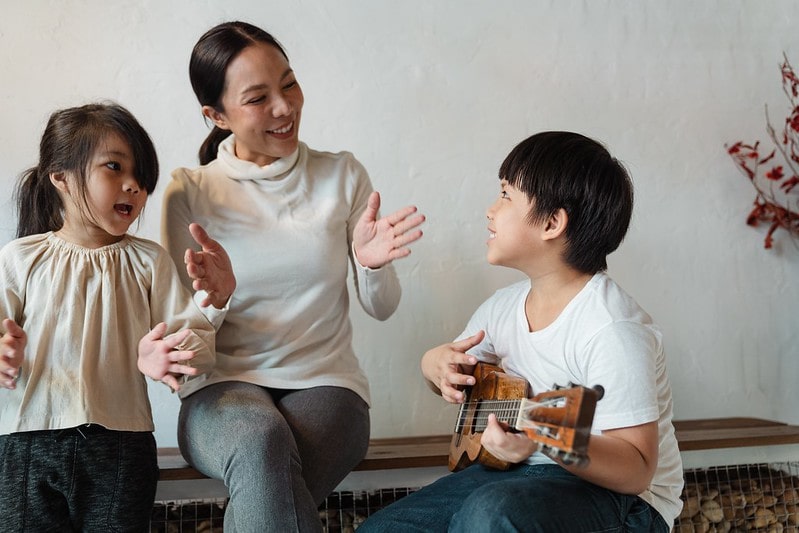 Accordion to a recent survey, most people don't even notice when you replace regular words with random musical instruments.

Read that first line again slowly! Whether you're looking for classical music jokes or musician puns, we've got something for everyone in this list of the best jokes about music.

If you love our music jokes, then maybe you'll also enjoy our collection of the 50 best jokes for kids around. Or, get stuck into one of our many great online music activities to do this summer with the kids. Whatever you do, do it after you’ve finished laughing your socks off at this list of hilarious music jokes!

These funny music jokes get everybody laughing. Which is your favourite music joke?

1) What type of music are balloons afraid of? Pop music!

2) Where did the music teacher leave his keys? In the piano!

3) What's the difference between a fish and a piano? You can't tuna fish!

4) What did the robbers take from the music store? The lute!

5) What sort of music do frogs like? Hip Hop!

6) Why couldn't the athlete listen to his music? Because he broke the record!

7) What part of a snake is the most musical? The scales!

8) What's an avocado's favourite kind of music? Guac and roll!

9) What do you get if Bach falls off his horse but has the courage to get back on and keep riding? Bach in the saddle!

10) Why is a piano so hard to open? Because the keys are already inside!

12) Why couldn't the orchestra find their composer? He was Haydn!

13) Why don't skeletons play music in church? Because they don't have any organs!

14) What's the most musical type of food? Chicken drumsticks!

15) Why did the tortilla chip start dancing? Because they put on the salsa!

16) Why was the musician arrested? Because she got in treble!

17) What genre of music is the national anthem? Country music!

19) How do you make a bandstand? Take away their chairs!

20) How do you fix a broken brass instrument? With a tuba glue!

21) What has forty feet and sings? The school choir!

23) Which one of Santa's helpers was the best singer? Elf-is Presley!

24) Why did the piano player keep banging his head against the keys? He was playing by ear!

25) What do a sword and a piano have in common? They can both B sharp!

26) Why did the opera singer bring a ladder to the concert? Because she wanted to reach the high notes!

27) What music does a planet listen to? Nep-tunes!

29) What rock band has four members who don't sing or play any instruments? Mount Rushmore.

31) What do you get when you put a radio in the fridge? Cool music!

32) Why does Jay-Z love Christmas so much? Because of all the wrapping!

33) What do you call a musical insect? A humbug!

35) What kind of instrument do rats play? Mouse organs!

37) Why do bagpipe players walk when they play? To get away from the noise!

38) What song do vampires hate? "You are my sunshine".

39) What's the difference between a guitar and a fish? You can't tuna fish!

40) Why are pirates such good singers? They can hit the high Cs!

41) What do a harmonica and a lawsuit have in common? Everyone is relieved when the case is closed!

43) What makes music in your hair? A headband!

44) How many conductors does it take to change a lightbulb? Only one, but it takes four movements!

45) What's the difference between a viola and onions? Nobody cries when you chop up a viola!

46) What sort of music does a mountain like? Rock!

47) What's the best Christmas present in the whole world? A broken drum; you can't beat it!

48) What do you call a cow that can play an instrument? A moo-sician!

Get Bach to basics with these hilarious musical jokes.

49) Rick Astley will let you borrow any movie from his Pixar collection except one. He's never going to give you Up.

50) I keep hearing music coming from my printer. I think the paper is jamming!

51) There are so many jokes about classical composers. I could write you a whole Liszt!

52) Marine biologists have discovered a group of killer whales that keep on meeting up and playing music together. They called it an orca-stra!

53) I heard you lost your classical music CD. But don't worry, I've got your Bach!

55) I don't think wind turbines like classical music. They're big metal fans, though!

56) I'd never hit someone with a musical instrument. I don't like to have to resort to violins!

57) When Mozart died, a very strange thing happened. People who would go to his grave swore they could hear his music, but it was playing backwards. After a long time, they finally figured out what was going on. He was decomposing.

58) Arnold Schwarzenegger is starring in a movie about classical music coosers. He'll be Bach!

59) My friend says he's going to start learning bass guitar... something about this sounds fishy.

60) A musician told me he was going to hit me with the neck of his guitar. I replied, "Is that a fret?"

Take a look at our hilarious music jokes about funny stories.

62) My neighbours listen to great music - whether they like it or not!

63) A man was sentenced to death. Before he was scheduled to die, he was asked by the prison warden if he had any last requests. "I do, actually," the man said, "I'd love to sing my favourite song one last time, the whole way through, without any interruptions." The warden agreed to let him sing the song, and he took a deep breath.

"One billion green bottles, standing on the wall. . ."

These music jokes will knock your socks off!

I didn't know you could yodel!

I've Benjamin to the music!

Oops! I did it again!

Elvis has left the building!