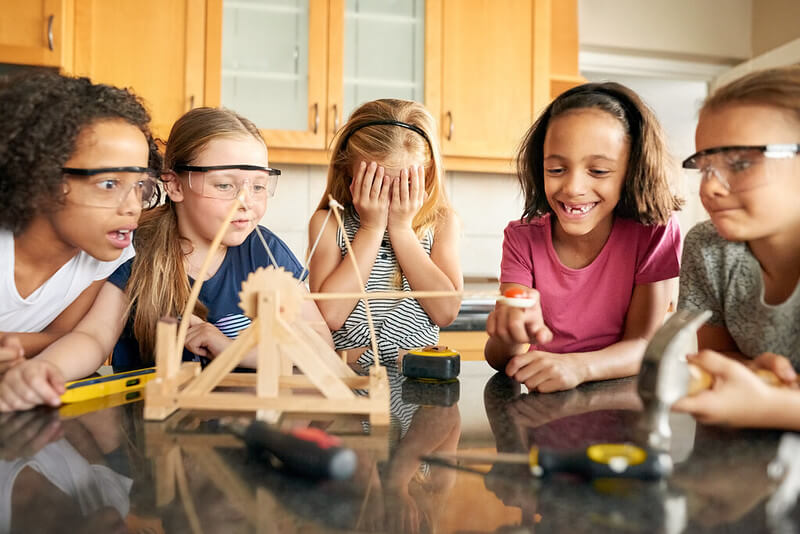 Marshmallow launchers are a great way to transform simple household materials into a fun game, whilst also providing a chance to learn some basic physics and experiment with engineering.

Make a marshmallow catapult following our simple instructions, and then get creative adapting the design to see how it changes the results. This is a cheap project to make, and kids will love assembling the simple structure before seeing who can launch their marshmallows the furthest!

How Does a Catapult Work?

A catapult works because of the tension that is stored in the machine's arm. This is typically a wooden stick or plank that is secured at one end, with a missile (in this case, a marshmallow) on the other end. When the arm is pushed down or pulled back, lots of potential energy is stored in it, which is released when the arm is allowed to spring back to its original position.

So, the 'elastic potential energy' that is stored in the machine changes to 'kinetic energy', or the energy of motion, when the arm is released. This kinetic energy is transferred to the object in the catapult (the marshmallow), which is what makes it fly through the air.

Catapults have been used throughout history, and there are lots of different designs and types. Some names you might have heard of include the ballista, the springald, the mangonel and the trebuchet. If your kids enjoy making these simple machines then there are lots of resources available that will teach them about the history, physics and engineering involved in designing and making launchers and catapults.

How to Make a Marshmallow Launcher

What You'll Need for a Basic Marshmallow Launcher:

1. Start by making a triangle using three of the sticks and three marshmallows. Push each stick halfway into the marshmallow, making sure not to push it all the way through - you can wrap some masking tape around the skewer where it enters the marshmallow to keep it from pushing further in.

2. With this triangle laying flat on the table, push an upright stick into each of the three marshmallows, then bring the three sticks together in the middle, securing them in a single marshmallow at the top. You should now have a pyramid shape.

3. Wrap a rubber band around the three sticks at the peak of the pyramid, to make sure they stay together. For added strength, wrap masking tape around the marshmallow so that it doesn't break when you use the launcher.

4. Take another stick and use tape to securely attach it to the handle of the plastic spoon.

5. Next, place a rubber band over the peak of the pyramid - do not wrap it tightly, as this is part of the catapult mechanism rather than something to make the structure strong.

6. Thread the stick with the spoon attached through this loose rubber band, and push it into one of the marshmallows on the base of the launcher. Note that the stick should be underneath the peak, running through the structure, not outside it, and the spoon should be facing upwards.

7. To use the launcher, place a marshmallow into the spoon and pull back until the rubber band is stretched, then let it go and watch to see where the marshmallow lands. Make sure not to pull too hard, as the spoon, stick or rubber band might break under too much pressure. Mini marshmallows work brilliantly in the catapult, but you can set up experiments to see which type of marshmallow launch the furthest or highest. Use tape to make a target on the wall or floor, and set up competitions for the kids to see who is best at using the launcher.

There are lots of fun ways of creating a marshmallow launcher and catapults at home. One of the simplest and easiest uses an empty plastic container, like a yoghurt pot or plastic cup, and a balloon.

1. Simply cut off the bottom third of the plastic pot or cup, so that the container is open on both ends.

2. Tie a knot in a balloon (not inflated) and cut off about 1cm from the top.

3. To create the launcher, simply place the balloon over one end of the plastic container, making sure that the knot is on the outside.

4. To use the catapult is easy. Simply place a marshmallow into the container, aim the cup at the target and then pull back on the knot, letting it go and watching the marshmallow fly out of the launcher. This marshmallow catapult takes almost no time to make, and once kids understand the basic theory behind the launcher, they can begin to experiment with different materials and sizes.

Another simple marshmallow launcher that takes no time to make can be put together in a couple of minutes, using only a spoon, some craft sticks and some rubber bands.

1. First, stack five craft sticks on top of one another, and tie together using a rubber band at each end.

2. Stack two sticks on top of each other, and tie together at one end only.

3. Slide the stack of 5 sticks between these two sticks, pushing them down as far as possible toward the rubber band at the other end - this should create a V-shape with the two sticks.

5. With more rubber bands, connect a spoon - facing upwards - onto one of the sticks in the V-shape.

6. To use the marshmallow launcher, place it on a flat surface and hold it firmly at the bottom. Using mini marshmallows, or other small, light objects, push the spoon down before letting it go and watching as the marshmallows fly through the air. Experiment by changing how many sticks there are in the wedge, using more or less than five - or see what happens when you use a longer or shorter stick for the launcher's arm.