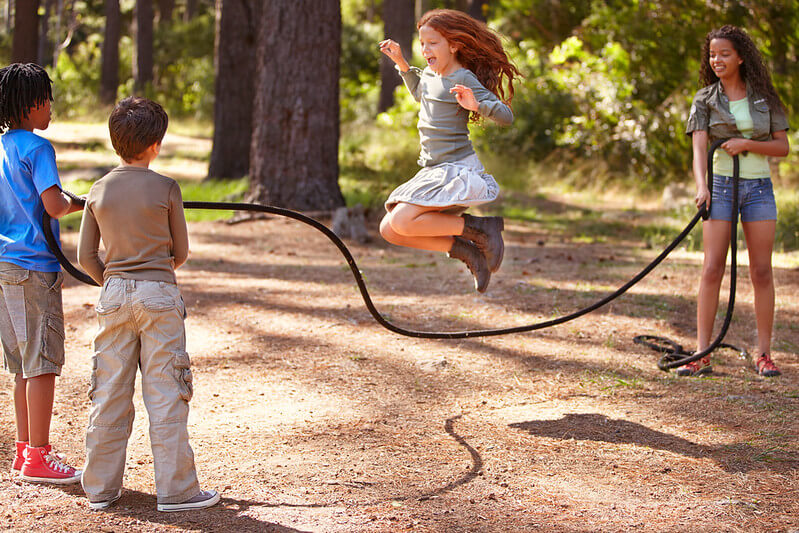 As lockdown rules begin to change and we can go out in parks and see friends, organising some low and no-contact games will make it easier to get kids to adhere to social distancing rules.

Children will easily forget the rules, so using these games will ensure they can still have fun without coming too close to their friends. Virtual playdates are another way you can help your kids meet up with their friends while staying safe, and they can share these jokes with their chums too.

If you're heading out, think about popping something in your bag that you can use to mark safe distances - such as cones, rope etc. Here are some ideas for fun outdoor games that kids can play while avoiding being close to each other.

Do as I say

Simon Says is an oldie but a goodie that makes a good outdoor game. Position the kids at least 2m apart, and get an adult or older kid to play Simon. The rules are simple - the leader tells the players to do something, clap their hands, or touch their toes for instance. If they say 'Simon says touch your toes', the players carry out the instruction. If the leader doesn't say Simon says, and simply states, 'touch your toes' they must stay still. Anyone who doesn't is out. Make sure 'Simon' knows to instruct the children to do things that won't take them away from their spot - ie, no running to the end of the park and back, as children are bound to end up too close to each other!

Give us a clue

This is a nice game to play if the weather is warm and you want everyone to chill out for a while. One person has to act out a book, film, song, TV show or play that they have chosen, and everyone else has to guess the title. Remember, you draw a square in the air for TV, wind an old-fashioned camera for film, mime curtains opening for play, mime opening a book or pretend to sing for a song. Hold up fingers to show how many words, show the number of fingers resting on your arm for syllables. The person who guesses correctly takes the next go at miming.

Quick on the draw

If you have never played Rock, Paper, Scissors with a few seven-year-old boys you have never discovered just how competitive this game can get. Hold your hand out flat for paper, a fist for rock and two-fingers for scissors. Scissors beats paper, rock beats scissors, paper beats rock. Hold a tournament; best of three, and then the winners go into the final. Dig out some sweets or chocolates as a prize.

Make sure you have plenty of space or divide the kids into sets of two if you have a smaller space. This will ensure they are running the races 2m apart. Mark out the lane with skipping ropes, twigs, or whatever, to make it clear. If you want something more interesting than just running races (especially if you have one child who is really fast and wins everything!) elect a 'coach' who will shout out different instructions throughout the race - such as hop, jump, walk backwards etc. If the kids are on bikes, see if they can win a slow bicycle race. The aim is to cycle as slowly as possible without falling off - the last one over the finish line wins!

Football games can be very safe, as long as the kids only touch the ball with their feet. They can set up some passing games, keeping 2m apart. Then make it more tricky by adding in some keepie-uppies before passing the ball back.

Usually played at parties, musical statues is easily adapted for outdoors. Just use a phone to play some music; make sure you're not close enough to annoy anyone else enjoying the fresh air. Each player must stand at least 2m apart where the 'judge' can see them. Choose an adult or older child or teen to take on this role. As the music plays they must dance - get them to dance on the spot for added safety. Award points for the craziest and most creative dances. When the music stops, everyone must freeze. If the 'judge' sees a player move after the music stops, that player is out of the game.

Give each child some chalk and let them have some fun drawing on the path or pavement (away from others of course). Older children could chalk a hopscotch or sensory path that everyone could have a go at. A sensory path is a course that has, for instance, a curly line to follow and circles to hop on. You can write instructions next to each part, to make sure everyone knows what they have to do.

If you have some skittles, fabulous, if not, make some by half-filling some large water bottles with water. Instead of rolling balls, which would mean handling them, the children can kick a ball to knock over the 'skittles'. Nominate an adult or older child to reset the bottles to avoid lots of people handling them.

Pirate Ships is a great game beloved of Beavers and Brownies. Normally, if you're indoors, you would assign a wall to North, South, East and West, but as this will encourage kids to get too close we'll leave that out. Choose a captain to shout out instructions, and then space the kids at 2m distances. Instructions include: Scrub the Decks – get on your knees and pretend to scrub the floor; Climb the Rigging – pretend to climb the ropes; Captain's Crook – pretend to be sick; Captain Aboard – salute and shout “Aye Aye Captain”; and Peg Leg Jim – hop on one leg.

A skipping rope offers lots of ideas for outdoor fun. You can skip on your own - have a go at some tricks such as scissor jumps where you land with one foot forward, then switch feet on the next jump; Cross jump - land with legs crossed, then apart, then crossed; Swing jump - land on one foot then swing the other leg out to the side. Switch them on the next jump; and Duckie where you land with your heels apart and toes and knees pointing inwards, then on the next jump, point toes and knees out and heels together. Little ones can play snake as long as your rope is long enough to allow distancing. Put the rope on the floor and wiggle it, and then little ones can take turns jumping over it - perfect for littlies who haven't yet mastered the art of skipping.

Another game for a skipping rope is Sweeper. Someone stands in the middle and turns around swinging the rope just above the ground. Players stand around in a circle usually - maybe just have one player on either side of the 'circle' to allow for distancing. Then they must jump over the rope every time it comes to them. If they hit the rope, they are out.