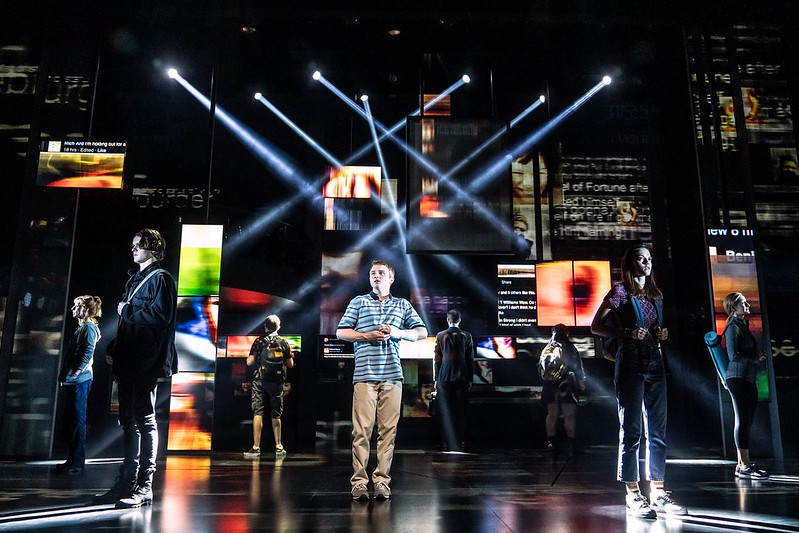 Last night my family and I went to see the newly opened Dear Evan Hansen at the Noël Coward Theatre. The show has made its way to the West End after huge success across the pond in America and after playing the incredible soundtrack on repeat, we were really excited to see it live on stage!

Dear Evan Hansen follows the story of Evan, a highschool senior with bad social anxiety and very few friends. However, all that changes when a misunderstanding means he is taken in by a family who have just lost their son. A letter that was accidentally read leads to a web of lies and the life he’s always wanted. As we knew the plot before we arrived, we were interested to see how it would actually be played out and whether we’d be able to resonate with any of the characters as it’s quite a specific storyline.

The first thing we noticed when we walked into the stunning theatre was the unusual set. It’s made up of screens that have social media feeds and other text projected on them throughout the show. I thought it was a really modern way of communicating the importance of technology and making you feel completely immersed in Evan’s world. The rest of the set was very minimal, featuring a few beds, a sofa and a kitchen table so it was really up to the actors to portray what their surroundings were, which I thought they did brilliantly.

The cast is small but you wouldn’t know it. The sound of them singing some of the bigger musical numbers together was incredible, I even had goosebumps at one point. The layering of the cast’s voices throughout the performance creates a really dramatic effect, the sounds of them talking really makes you feel as though you’re inside Evan’s head and can understand what he’s thinking and feeling. It was a powerful way of making it feel like there were lots more people on stage.

This musical is definitely one for older kids, it touches on some sensitive subjects and uses strong language, it’s recommended for ages 12 and over but I didn’t see anyone in the audience who was younger than my 14 year-old sister. Even though the show focuses on a teenager, I felt like it was definitely one that adults could understand and relate to in a way that may even bring them closer to the teenagers in their life.

As I mentioned, we were worried about how much we’d be able to relate to the show but actually, the underlying message of the whole performance was about how no one deserves to feel alone, no matter who they are. It’s something we all felt a connection to because feeling alone or like you don’t fit in is something so many people experience.

Dear Evan Hansen was a humbling, thought-provoking and wonderful show that left us feeling grateful for those around us and with a new confidence to be ourselves.

Olivia Ward-Smith
This is some text inside of a div block.

BOXPARK Wembley’s Family Playbox Is Back

Alice Carlill
This is some text inside of a div block.
Under 5s