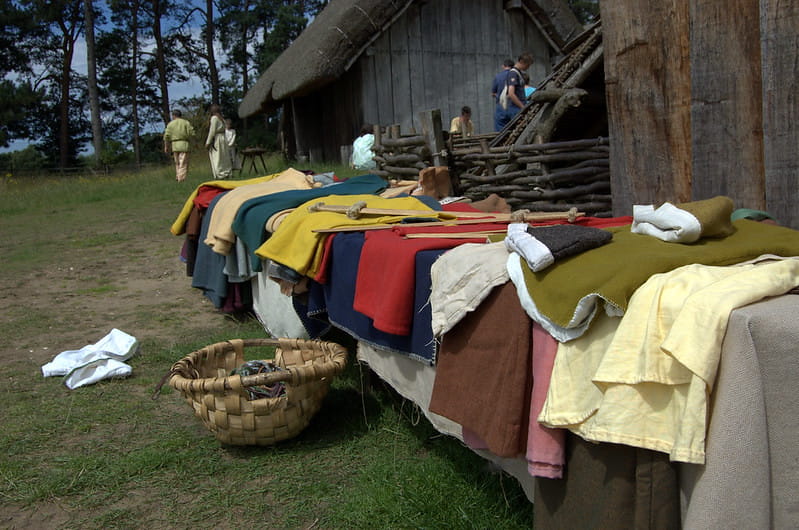 History is such a brilliant topic for parents and guardians to get involved in with their children. Kings and Queens, war and peace, and the development of whole civilisations - it's unquestionably captivating for all ages.  Whether you need a complete overview with our easy history timeline or want to bring history to life through crafts, Kidadl are here to help.

And today we're taking a closer look at the fascinating subject of clothes in the Iron Age.

Life In The Iron Age

In approximately 800 BC people in Britain learned how to use iron and it revolutionised the way people lived their lives. Many areas of life, from farming to basic manufacturing, was made so much easier and settlements grew in size. People lived in clans led by warrior kings and rival tribes fought frequent, violent battles, meaning many people lived in hill forts to stay safe from attacks.

What Did Iron Age People Wear?

Iron Age cultures in Europe developed their own distinct fashions and traditions, which shared some common trends. The clothes of Iron Age people were made from organic local materials like wool, linen and animal skins and were dyed bright colours, like blue, yellow and red, using natural vegetable dyes made from plants and berries.

Men wore trousers called bracae and a tunic, often made from wool, secured around the waist with a belt. Worn over this would have been a cloak, made either from fur or weaved with a striped or checked pattern, fastened by a brooch. Heavy boots were also a must to help them survive the harsh weather and gruelling work.

Women's clothes generally included wool skirts, blouses and dresses, with a similar cloak of fur or weaved wool and heavy boots like the men.

Iron Age people loved to wear metal jewellery and many examples have been uncovered on archaeological digs. Brooches and pins featuring symmetrical designs would have been used to fasten their clothes, and were used just as much for decorative purposes as practical.

A gold neck ring called a torc would have been worn by important men like chieftains and warriors to indicate their status.

How Do We Know What Iron Age People Wore?

There are no complete surviving examples of Iron Age clothes: because they were made from soft, organic materials they have long since decomposed. However, archaeologists have found pieces of clothes that have survived in waterlogged conditions, or evidence of cloth impressions in baked clay or rust from buried iron objects. And what has also survived the centuries underground are items made from bone, stone, antler or baked clay that were used to make clothing. Drop spindle whorls, loom weights, weaving swords, combs and needles have all been discovered, meaning that we can safely assume that Iron Age people spun thread and used upright weighted looms to weave cloth for their clothes.

Images of male heads stamped onto jewellery, coins and other items that have been uncovered and dated to this period also illustrate men with moustaches.

Our understanding of how people in the Iron Age dressed has also been informed by classical texts and writers of the time. Roman authors noted many key differences between the plain togas they wore, and the distinctive appearance of European Iron Age people.

Britain's Iron Age people were noted to have worn a form of close-fitting trousers (bracae) and to use colourful textiles. Classical texts reference both men and women having long hair, sometimes worn in a plait, and that the men wore either beards or moustaches, which they also grew long.

If you want to bring everything you've learned to life, why not try out these fun and engaging activities with the kids and see how many facts about the Iron Age they can remember.

Jewellery making. Ask children to craft or design their best jewellery or neck ring - remember, the key is symmetry.

Compare and contrast. Find pictures of Iron Age and modern clothing - can children identify all the differences?