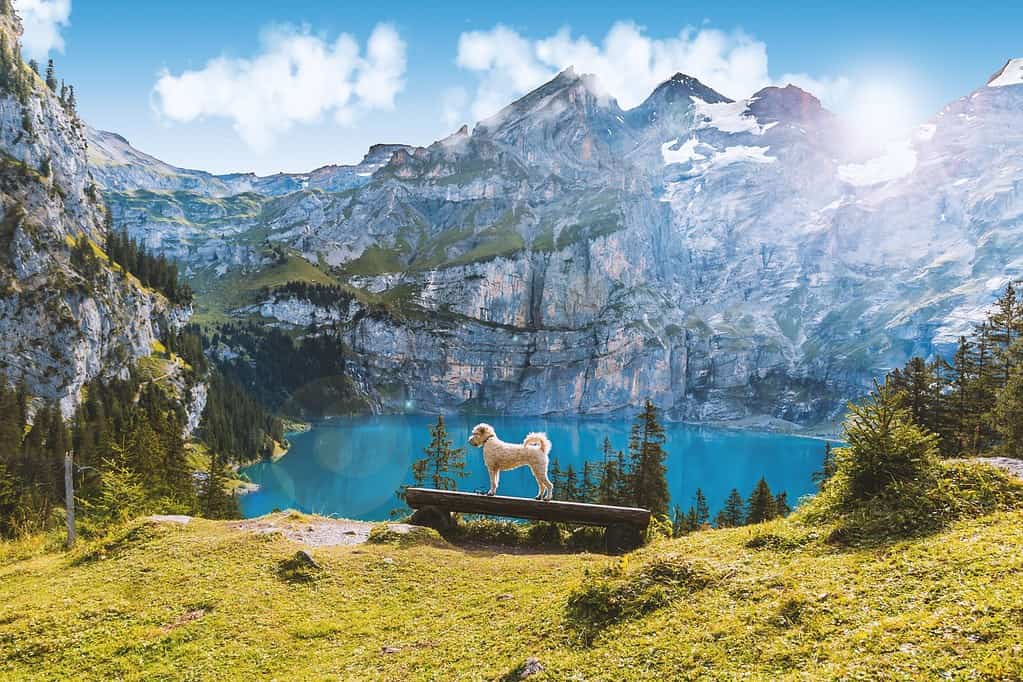 Switzerland is a landlocked country in Europe that tends to do things on its own terms.

Part of the Schengen Area but outside of the European Union, Switzerland is a country that does things differently (it even has its own national currency, the Swiss Franc). Famous for its chocolate, cheese, banking system and watches, the mountainous country is a winter holiday destination and a fascinating study subject.

Many might think of Switzerland as a neutral, peacekeeping country nestled in the middle of Western Europe, and it is that. But this is not all there is to know about Switzerland!

Keep on reading to learn some fun facts about Switzerland and find out more about the country.

Basic Facts About Switzerland For Kids

1. The official name of Switzerland is Confoederatio Helvetica. It’s Latin for Swiss Confederation and only used on official documents.

2. Helvetia is the female allegory of the country. The name comes from the Gaulish, pre-Roman tribes that lived in the area, the Helvetii.

4. Switzerland is landlocked, which means it has no access to the sea. It has borders with Germany, Austria, Liechtenstein, Italy and France.

5. There might not be any Switzerland seas, but the country has plenty of water, with 1500 lakes!

6. Only two sovereign states in the world have a square flag: Switzerland’s red cross on white and Vatican City.

8. The country’s capital is Bern.

10. German is the most widely spoken language in Switzerland.

11. Depending on where they live in Switzerland, people speak German, or German and French, or even German French and Italian!

13. Switzerland is divided into 26 cantons. A canton is a district, like a state in the USA. Not all cantons speak the same language.

14. The official national currency is the Swiss Franc.

Things Switzerland Is Famous For

15. Switzerland is famous for its chocolate, cheese, banking, watches and mountains.

16. Switzerland is the largest producer of chocolate in the world!

17. The Swiss produce a lot of chocolate, but they also consume their fair share: they eat more chocolate per capita than any other country.

20. Tim Berners-Lee is an English scientist, but when he invented the World Wide Web in 1989, he was in Switzerland.

21. Another famous scientist made an important contribution to the world whist in the country: Albert Einstein was in Switzerland when he invented the E=MC² equation.

22. The wristwatch was invented by Patek Philippe of Switzerland too.

23. Tissot, TAG Heuer, Rolex and Patek Philippe are some of the most famous names in luxury watchmaking, and all these companies are Swiss.

24. Rolex invented the first waterproof and dustproof watch, 'oyster,' in 1926.

25. Some of the most famous Swiss cheeses are Gruyère and Emmentaler, but there are hundreds of varieties throughout the country.

26. The Swiss Army Knife is the world's smallest toolbox, giving its owners all the tools needed in the smallest package possible. It was invented by Karl Elsener.

27. Switzerland is famous for its mountains. The highest peak in the country is the Dufour Peak, at 4,634m or 15,203 feet. The Peak is located in the Monte Rosa Massif of the Pennine Alps and is the second highest mountain in Western Europe. Only Mont Blanc, between France and Italy, is taller.

29. With so many mountains around,  the Swiss love skiing, snowboarding and mountaineering.

30. The most popular sports in Switzerland are football and ice hockey.

31. The Swiss take football very seriously, with some 10,000 matches played every weekend all over the country.

32. Switzerland has some traditional sports you might never have heard of. Schwingen is a form of wrestling, Hornussen is a cross between baseball and golf and Steinstossen is like stone put, where you throw a heavy stone as far as possible.

33. Roger Federer is the most famous Swiss sportsman. The tennis player is ranked 4th in the world and has won eight Wimbledon’s titles.

34. Switzerland doesn’t have a national animal, but some cantons do have animal symbols like the bear, the bull, the ram, the lion, the ibex or the eagle.

37. Switzerland has been independent since 1499! The only stain on this very impressive feat is the occupation by Napoleon’s France between 1798 and 1815.

38. Switzerland is famously neutral during times of war. This official position was established by the Treaty of Paris in 1815. That’s 205 years of not getting involved in other countries’ wars!

39. They might be neutral, but the Swiss have an army. In 2007, 170 Swiss soldiers invaded Liechtenstein by mistake. The soldiers crossed the unmarked border and walked on for a mile before realising they were no longer on their own territory. This wasn’t the first time that the Swiss invaded their neighbours, however, with another incident in 1992. The only time these “invasions” posed a real problem was when the Swiss bombed Liechtenstein in 1985. Again, this was an accident, but it did cause a forest fire and was a bit harder to explain.

40. Swiss men all have to join the military for their military service, which lasts about 21 weeks.

41. The Swiss Guards are famous the world over for protecting the Vatican and the Pope. The guards have dual citizenship and are the only Swiss to be allowed to serve in a “foreign army.”

42. 1 August is National Day in Switzerland. It celebrates the founding of the Confederacy.

43. Bollywood is in love with Switzerland and many Indian films have been shot in the country, a love affair that has lasted since the 60s.