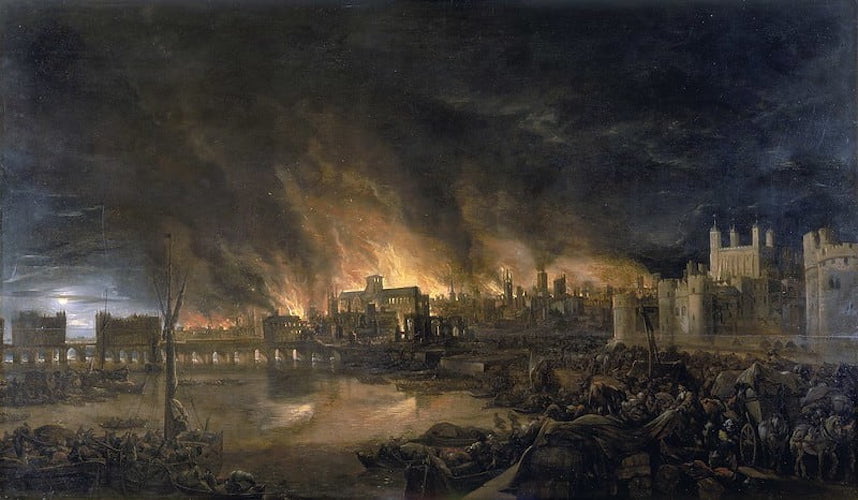 The Great Fire of London is an important event in British history and September 1666 will never be forgotten.

In September 1666, London was the largest city in Britain by far and had been enclosed in a city wall that the Romans had built centuries earlier. Here we'll take you through 15 interesting facts about the dramatic night that the city went up in flames.

Why is the Great Fire Of London Important to History?

After the Great Fire of London, people knew not to build houses out of wood and straw and other flammable materials and to build houses so close together. This shows that there is lots we can learnt from past events, even if they were awful, they often inspired many new advancements and procedures that have influenced how we live today.

1.The Great Fire of London  broke out in Pudding Lane just after midnight when Thomas Farriner forgot to put the fire in the oven out, on 2 September 1666.

Fun Fact: Thomas Farriner's family were stuck upstairs and had to jump out the window so they could escape!

2.St Paul's Cathedral became a refuge for many people, they flocked there as it was made of stone, but the roof was made of wood - oops, perhaps that wasn't such a good idea.

3.A whopping 13,000 houses and 87 churches were burnt down in the fire. They burnt down so easily because most of the houses were built of straw, wood and other flammable materials. These houses were really close together and so the fire spread quickly.

4.70,000 people lost their homes and had to escape London to nearby fields and set up new places to stay.

5.Robert Hubert was hung after he admitted to starting the fire, but it was later discovered he didn't do it and the fire was an accident.

7.By analysing melted pottery fragments from the Great Fire of London, it was found that temperatures at Pudding Lane and beyond reached 1,250 degrees Celsius - and we thought 35 degrees was hot! That's definitely the hottest September ever.

8.The Fire of London began just as the people of London were recovering from the plague that spread in the city throughout the 1600s. The plague killed around 15% of the British population in the 1660s, that was over 100,000 people.

Fun fact: In the stories of Doctor Faustus, Dr Faust appeals to Mephistocoles, a demon, to end the plague that killed so many in London. Mephistocoles grants his wish. Mephistocoles starts the Great Fire of London to kill all those infected with the plague and Dr Faustus is distraught!

9.Samuel Pepys wrote in March 1667 that even six months after the fire was put out he could still see some towers on fire. It's important to note that this is one account and it might not be wholly true. Whether it is definitely true or not, Samuel Pepys is an important figure regarding the Great Fire of London because he kept a diary where he wrote about the fire and his warnings to the London Mayor and King Charles II.

10.King Louis XIV of France offered to send aid in the form of food and anything else the destitute people of London needed.

11.After the fire, the houses were made from brick to prevent such an awful thing from happening again. John Evelyn actually warned King Charles II in 1661 about the fire hazard the houses would cause, and he didn't listen!

12.Sir Christopher Wren created a monument to commemorate the Great Fire of London that took six years to build. It stands at 61 metres high! This represents the 61 metre distance between where the fire started in Pudding Lane and where the monument now stands near London Bridge.

14.Because of the damage done and the loss of homes, there were really significant financial issues for many people. In 1680, Nicholas Barbon set up an early insurance company for fire related losses, an important development towards the insurance businesses we know today.

15.After the Great Fire of London, it was revealed that some people had previously plotted to start a fire in London to overthrow King Charles II. This fire was meant to take place on the anniversary of Oliver Cromwell's death.  It was John Rathborne and William Saunders who were found guilty of planning this fire and conspiring against the King.

Did You Know? Officials considered letting down the Portcullis during the fire, which is the gate that closed people into the city of London. If they had done this no one would have been able to escape.