How To Play Marbles: 5 Fun Games To Play 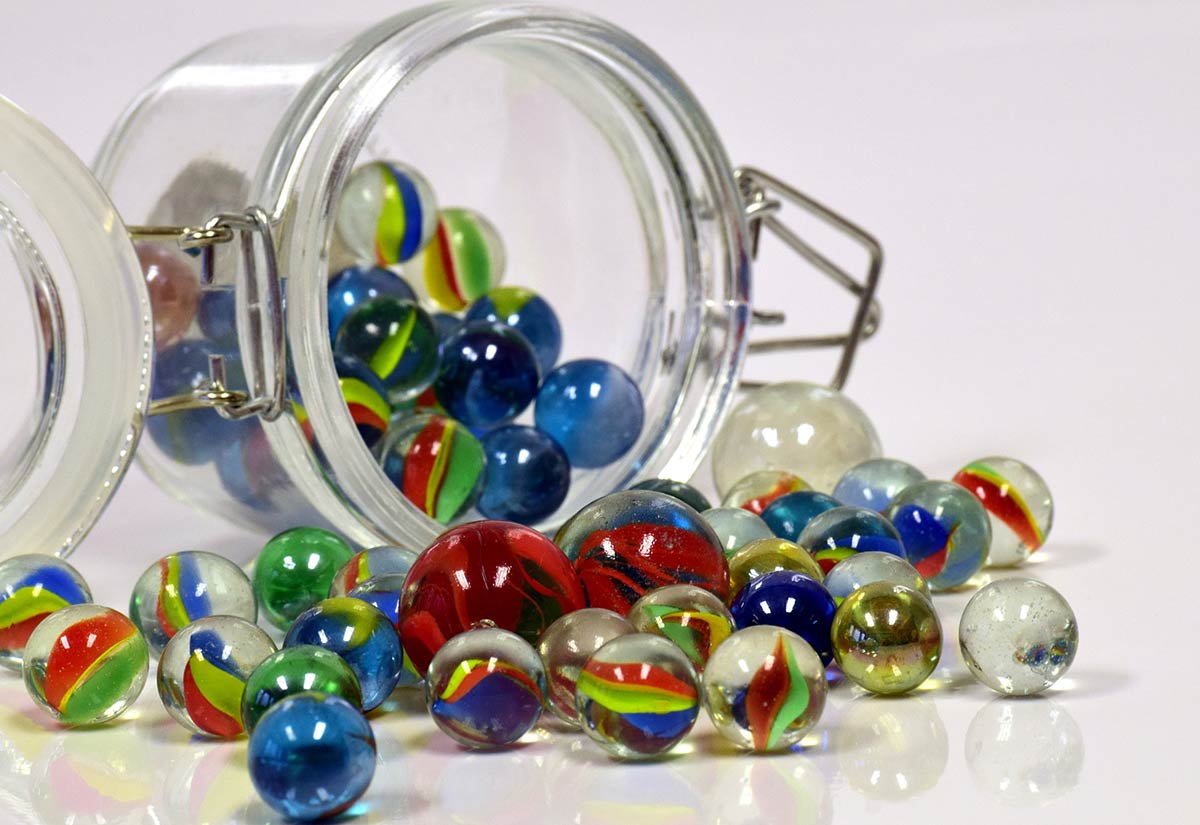 Playing with marbles is a pastime which has been passed from one generation to the next and there’s no denying that marbles are beautiful, durable, inexpensive, and fun.

Many marble games are open to variation, and classic marble games are still as just as fun for kids today. Let’s explore which top games you can rekindle with your kids and a little about the origins of marble playing.

Dating back to the times of Ancient Rome and Ancient Egypt, the earliest marbles were made of flint, wood, stone, and baked clay. They have been found in archaeological sites all over the world and the British Museum in London displays a brilliant variety of these. In the late 1800s, a unique pair of marble scissors with a spherical mould was invented. This meant that marbles could be produced quickly and sold to the public. These days marbles are made from a wide range of materials, but glass marbles remain the most popular.

Before you play a game of marbles, make sure it is clear whether you are playing “keepsies” or not. Most of the time marbles are given back to the original owner at the end of the game, known as a friendly match, but sometimes players keep the marbles they win. It is a good idea to be clear which way you are playing before a game begins. Once you’ve established the ground rules to play- it’s time to choose your game!

Important: Please note that marbles are a potential choking hazard for small children, always supervise kids playing with marbles and ensure that they are stored out of reach of children.

Have you got what it takes to hit the bullseye? For this game, you’ll need two to four players and five marbles each.

1. Draw four circles with chalk onto the floor (a surface such as pavement or a playground is ideal for playing marbles). Draw each ring within the next one (you should have four circles, with the centre being the bullseye).

2. Assign each circle a number of points. Then give each player an allotted amount of marbles and take turns to play, shooting them into the circles, aiming for the centre ring.

3. Once everyone has shot their marbles, count up the scores to determine the bullseye winner. It’s best to keep a tally of the points as you are playing to avoid any disagreements!

It’s A Knock Out

For marble pros, this is a game that takes great skill and can become intensely competitive! This is one of the most well known of all games and it is best played with between two and four players. You'll need at least fifteen marbles each.

1. Firstly, draw two circles on the ground. The inner-ring's diameter should be about 30cm and the diameter of the outside ring should be around 2m.

2. Each player puts an agreed number of marbles into the circle. The order of play is determined, and the players take turns to aim their shooter marble from anywhere within the outer ring. The idea of the game is to shoot towards the marbles in the centre circle.

3. Any marbles knocked out of the centre are kept by the shooter. They are then entitled to have another go from the spot where their shooter marble landed.

4. When a shot is unsuccessful, the next turn is taken by the following player and the shooter marble (the taw) remains on the ground where it came to a stop. If that location is within the outer ring, the next player can then aim at the marbles in the centre or at any of their opponent’s taws.

5. Should the player hit a taw, the owner of that shooter marble has to give their opponent a marble, and they take another turn. The game continues until the ring is emptied, and the player with the most marbles wins.

Is the secret to this game is a very sharp eye? Why don't you have a play and discover if you have what it takes to win Bounce Eye? You'll need two players and eight marbles each.

1. Draw a 30cm circle on the ground. Each player places one marble forming a pool of marbles in the middle of the ring. Participants then take it in turns to stand over the circle and gently drop a marble from eye-level into the pool of marbles. The player gets to keep any marbles knocked out of the circle.

2. Should a player fail to hit any marbles with a drop, that dropped marble remains in the marble pool. The game play continues until the pool is empty. The player with the most marbles collected wins.

A Game Of Hundreds

A game for two players, you'll need 10 marbles each. Here's how to play 'Hundreds' with marbles.

3. The marbles game continues until a player has scored 100 or until they miss. When the player misses, the turn passes to the opponent, who shoots and scores until they miss.

4. The first player to reach 100 points is declared the winner.

This is one of the best marble games for beginners or younger children. You'll need three players and 10 marbles each.

1. Order of play is decided first. This can be done by drawing a line on the floor and seeing who rolls a shooter marble closest to the line from an agreed distance.

2. To start playing, the first player throws forward a marble to whatever distance they desire

3. The next player then aims at this marble. If they collide, it is “captured”, it then becomes the shooter’s property. The same player then rolls out a new marble to restart the game. If the shot is missed, the marble remains in play.

4. During the next turn, the third player can then shoot at either marble, conquering whatever they hit, but leaving the marble in the game should they miss. If a marble is shot with force and bounces off several marbles in the area, then all those hit are conquered.

5. The game finishes when there are no marbles left in play, and the winner is whoever has conquered the most.

Now that you know all the games, you can sound like a real pro when you play marbles by using these terms.

Taw: The name for shooter marbles. Shooters are usually a heavier, ideal for knocking out others.

Mibs: The marbles in the centre of the circle.

Bombing: When marbles are dropped onto other marbles rather than shot.

Lagging: Shooting or rolling the marble to a line to determine who gets to play first.