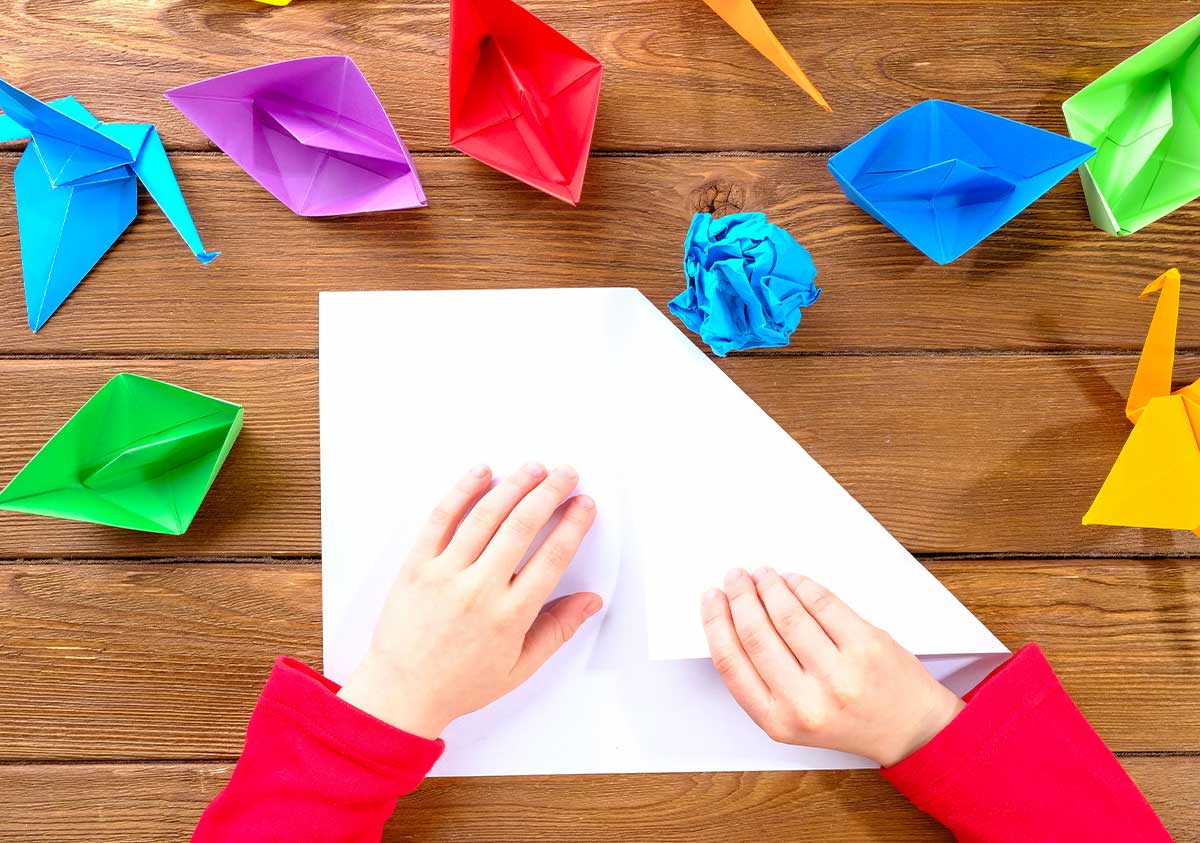 Origami is a type of art that originated in Japan - it is the art of paper folding.

Pokemon is more than just one form of entertainment: it's the name shared by the famous TV cartoon, video game, toys and trading card game. A central theme in Pokemon is the collection of small creatures, which can be collected and battle one another. Created in Japan, Pokemon is actually short for "pocket monsters" and has been loved by children and adults the world over.

You may have heard of the game 'Pokemon Go' or characters like Pikachu, Bulbasaur and Charmander.

It's good for kids to learn origami because it develops the imagination, fine motor skills and sense of colour. Following origami instructions helps to improve spatial awareness and concentration, boosting brain development also. So why not have a go at making these origami Pokemon characters?

Square origami paper, yellow on one side and white on the other (20cm x 20cm). Since finding paper that's the right dimension, we recommend using this pack of origami paper for all of these crafts.

Black and red marker pens for drawing a face onto your origami Pikachu.

1) Colour side down, rotate the paper square so that origami Pikachu looks like a diamond.

2) Fold the diamond in half, left to right, then unfold.

3) Fold the bottom half of the paper up to the top.

5) Fold the left and right edges diagonally, up towards the middle of the shape, forming a new origami Pikachu diamond.

6) Fold the corners on the left and right inwards, to the centre, creating two ears for origami Pikachu.

7) Fold each ear out, to the left and right, to make them appear however you like.

8) Fold in the corners on the left and right, slightly, get rid of the pointy cheeks.

9) Fold the bottom corner in slightly, to flatten the pointy chin.

10) Turn your origami Pikachu over, grab some markers and begin to draw the face!

Make your own Bulbasaur with this super easy origami tutorial - you could even play Pokemon Go in real life with it!

Square origami paper that is blue on one side and white on the other (20cm x 20cm).

1) Blue side down, rotate the paper square so that it looks like a diamond, then fold in half to create a horizontal crease. Keep folded to look like an upside-down triangle.

3)Take each new flap created and fold it back 2/3 of the way.

4) Rotate the Bulbasaur 90 degrees and fold the two flaps in the bottom-left corner inwards, so that there is a flat edge instead.

5) Turn over, rotate, and you'll now see Bulbasaur's head. Grab some markers and start adding details to his face.

Square origami paper, brown on one side and white on the other (20cm x 20cm).

1) Brown side down, fold the paper square in half diagonally, then open up and rotate so that the crease is vertical and the square looks like a diamond.

2) Take the right corner and fold the top-right edge into the centre, then unfold.

3) Fold the diamond in half vertically.

4) Fold both corners (left and right) in towards the bottom corner, forming a tiny paper diamond.

5) Fold the top corner in, about 1cm away from the centre of the diamond.

6) Cut a line from the tip of the folded corner to the top edge, creating two ears.

7) Fold the inner ears up such that the crease of the fold goes into the middle of the top edge.

8) Fold the ears down again, then take the bottom right layer from the bottom corner and fold it up, so that the crease ends where the two ears meet. Do the same for the bottom left layer.

9) Lifting these two bottom layers will reveal two other layers in the bottom corner. Take the first and fold it up so that the point is where the two ears meet.

10) Fold in the protruding corners on the left and right, tucking them in.

12) Grab some markers and get decorating!

1) Fold the paper square in half, horizontally and vertically.

2) Fold all four corners into the centre to make a smaller paper square.

3) Turn over and fold in half again, horizontally and vertically.

4) Turn over and unfold the top and bottom flaps, so that they're sticking out.

5) Take hold of the left and right middle creases (the horizontal ones) and bring them towards each other. As you do so, fold the rest of the shape in half, so that the top corner sticking out folds to touch the bottom corner. You should end up with a diamond shape.

6) Take the corner on the right and lift the top flap up. Then bring it into the centre, folding it backwards. Do the same for the top left flap, so that its point is touching the folded right flap

7) Turn it over and repeat, folding the left and right flaps backwards on the other side.

8) Take one of your flaps and lift it back out again. Then open just that flap and fold it in, so that the crease that was sticking out is now folded inside your Pokémon ball.

9) Repeat for the other three flaps.

11) On one side only, life the flap on the top-right corner of your hexagon and fold it backwards by about half a centimetre, turning that corner into a small but wide triangle.

13) Turn over and repeat on all four flaps.

14) Turn back over and lift up one of the corner flaps, then unfold to reveal a large triangular crease, with a small triangle inside it (sharing the same base pleat).

16) Repeat for the three other flaps on that side, and the four on the other side.

17) Open everything out to reveal two large flaps (one at the top and another at the bottom) and four flaps in between, beginning to form a box shape.

18) Fold in the two flaps on either side of the top flap, inwards so that the top flap is adjacent to the right and left sides of the paper Pokemon ball.

19) Repeat for the two flaps next to the large flap on the bottom.

20) Take the large top flap and fold it into the box, over the folds that formed it, then tuck in neatly,

21) Repeat for the bottom flaps and folds that formed it, tucking in neatly.

22) Remove the top flap again (now that creases have been formed) apply glue to the inside, then restore to its place so that it will stick. Repeat with the bottom flap.

24) Cut one of the sheets of black A4 paper into inch-wide horizontal strips.

25) Fold each inch-wide strip in half, horizontally to half the height.

26) Unfold and apply a sparing amount of PVA glue to the first black strip, all around the inside.

27) Take the red half of your Pokemon ball and fold your black strip with PVA glue on it all over the edge, sticking them together. Repeat with another strip until the mouth of the red part of the Pokemon ball has a black border all around it.

28) Use your circle template to draw a circle on the other sheet of black paper, around 4cm in diameter (or the closest size your template has), then cut it out.

29) Use the template to draw two more circles on white paper, of diameters 3cm and 2cm (roughly). Cut out and stick on top of the black circle, in size order.

31) Place the red half on top of the white half to complete your paper Pokemon ball and you're done!