How To Make An Origami Peacock 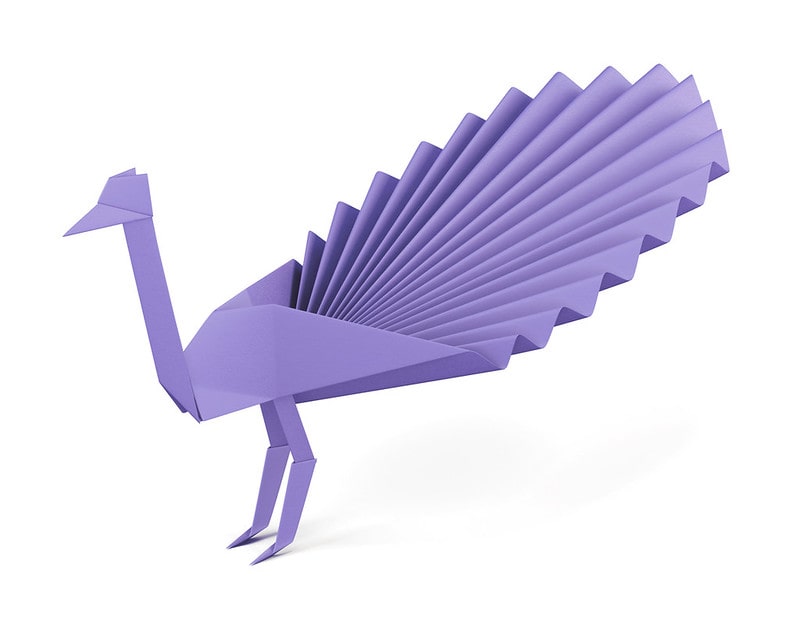 Origami is the famous art of paper-folding, which originated in Japan around the 17th century.

Kids love origami because there's no limit to what you can create with a few folds! Origami is fun and very practical, giving kids the independence to make whatever they like.

With freedom in the choice of colours and textures, origami shows kids the potential of paper, simply by folding and creasing in different ways. Often, origami can be practised without scissors or glue too!

An origami peacock is a great animal to make because it helps you gain more folding practice, enabling you to take on more complex origami in future. The origami peacock craft requires concentration and attention to detail, which are great skills to have and can help kids when engaging in other activities too!

Rewarding and challenging, peacock origami is almost as captivating as the animal itself! The body of a peacock is a deep, rich blue, a bit lighter than ultramarine. Peacock feathers are brown but reflect green, blue and turquoise light. They also appear iridescent. Needless to say, the peacock is quite striking.

Square origami paper, deep blue on one side and white on the other (20cm x 20cm).

1) With the coloured side down, rotate the square so that it looks like a diamond.

2) Fold the paper peacock-in-the-making in half to create a horizontal crease, then unfold.

3) Take the top corner of the origami paper down to the middle horizontal crease, such that the entire left edge is also on the middle crease.

4) Repeat for the bottom corner and right crease, to turn the paper diamond into a sideways kite.

5) Lift one of the corners on the horizontal crease and fold it back to the edge of the kite. So the top corner that was on the middle crease is folded back to the left edge and the bottom corner is folded back onto the right edge.  Don't unfold the kite to do so, simply fold the corners as far back as they need to be to reach the edges of the kite.

6) Rotate the paper peacock origami 90 degrees anticlockwise and fold the kite in half, such that the bottom corner meets the top corner.

7) Take the corner on top of the folded paper and fold it down towards the right, so that the corner sticks out an inch or so past the bottom right corner, creating a triangle.

8) Fold the right side of the paper behind, to meet the left. While doing so, pull the bottom right corner triangle from step seven out a bit and flatten it along its backside.

9) Fold the right corner up and to the left until it reaches the middle, forming a new crease.

10) Now perform a hood fold along the crease in step nine: on the crease, separate a corner and fold it back over itself, creating a new triangle.

11) Do a second hood fold at the top of this new triangle, to form the peacock's beak.

12) Mark an imaginary vertical line around an inch from the peacock's body. Take the top right corner and fold the top layer inwards along this line.

13) Fold the layer in half, backwards.

15) Unfold the last four folds to form the tail feathers of the peacock.

16) Fold the top corner back to spread the feathers out more, and you're done!

A sprinkle of glitter on the paper before starting will give the peacock a lovely iridescent sparkle.

Origami paper is recommended here as ordinary copy paper can wrinkle more easily, or even rip.

For a larger origami peacock, try working with a larger square or origami paper.

For more precise folding, crease the corners first, then press the middle, then crease everywhere else along the fold.

If stuck along the way, unfold and try again, rather than trying to force the fold.

Before creasing, always fold the paper lightly first, only securing the fold when the positioning is correct.