How To Make An Origami Gift Box: Step By Step Guide 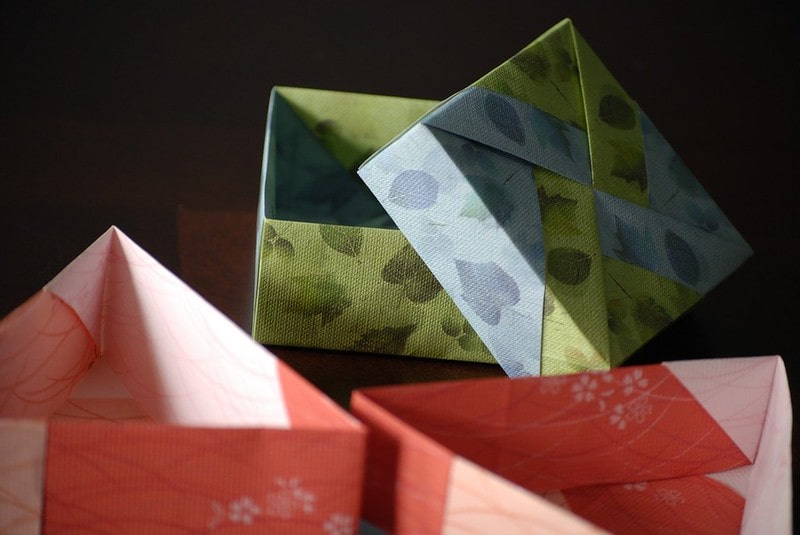 Origami is the ancient art of folding paper into beautiful structures and is often associated with Japanese culture, although it has roots in other societies also.

This traditional origami gift box is based on masu boxes, which were originally made of wood and used to measure rice. This version uses simple paper folds to create a sturdy box that is perfect for packaging up a gift.

A fantastic craft for children to complete, they can choose which colour or patterned paper they want to use and follow the step by step instructions to create the finished origami box. What's great about this is that not only do they get the sense of achievement of crafting a beautiful origami gift box but they also get to put a smile on the face of whoever they give the gift to.

So, if you are ready, follow our step by step guide on how to make a gift box for the ideal origami gift.

You Will Need: To make one folding gift box you'll need two sheets of origami paper or any other square paper. This can be coloured or patterned, and the paper used for the lid of the box and the bottom of the box doesn't have to match. We think origami paper like this could be great if you're making a gift box for a celebration. Scrapbook paper is a good choice as it is slightly thicker whilst makes a sturdier box. Once your paper is chosen, you are ready to start folding a box.

Step 1: To begin making your origami gift box, take one sheet of paper and put the paper pattern side down. Fold the paper in half horizontally, crease it well and then open the paper back up. Then, fold the paper in half vertically, again, making a crease before unfolding. You should have a cross-crease on your paper.

Step 2: Next, take one corner of the paper and fold it into the middle so it reaches the centre point where the creases you have just made cross over. Repeat this for the other three corners.

Step 3: Rotate your paper 45 degrees so that it is square again and you have a straight line along the top. Fold the top edge down to the centre of the square and make a crease. Repeat this for the bottom edge and then unfold back to how your paper looked at the end of step one.

Step 4: Do the same as you did in step one but this time, folding the paper into the middle from each side. Again, unfold the structure at the end of this step so that it looks as it did at the end of step one.

Step 5: Unfold the top and bottom triangle, leaving the triangles on either side folded in. Take each side of the structure and fold them into the centre. Slowly, pull the structure open on each side from about one-third of the way down. You should begin to see the base of the box forming along with a vertical flap.

Step 6: Fold the vertical flap down into the base of the gift box and press it into place to form an edge of the box. Turn your origami 180 degrees and do the same for the other end to create the fourth and final edge.

Step 7: If you want to make a lid for your origami boxes, there are a couple of ways you can do this. Firstly, you can use a sheet of paper that is slightly bigger than the piece you used to make the base of the box, though this can be difficult if you are using standard origami paper. The other option is to follow the same steps again using square paper apart from in step one when you fold each corner in, you don't do this right to the middle but instead, leave a little bit of space.

Once you have mastered how to make gift boxes you'll be able to use your origami skills to fold boxes whenever you need to plus, you and your children will be able to try to fold a box that is bigger or smaller than the ones you have made before! Although labelled as origami gift boxes, each folded box also makes the perfect place to store small items like paperclips, hair bands, stickers or origami supplies!