He's Behind You! 6 Fun Facts You And Your Mini Jesters Didn't Know About Punch And Judy 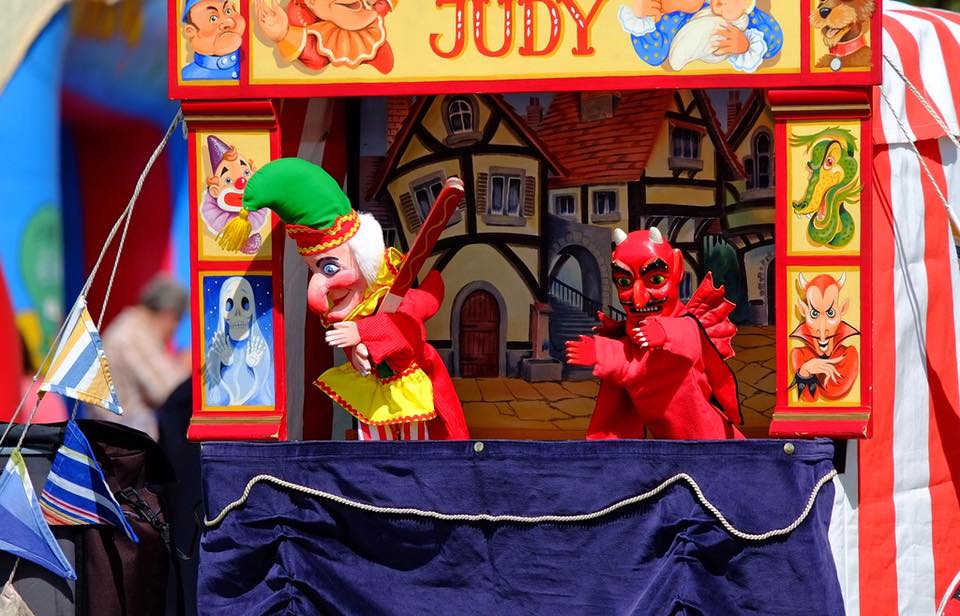 It’s three o’clock on a Sunday afternoon and you’ve just pitched up to watch Punch and Judy, ice cream in hand, deckchair planted firmly into the stones on the beach. Nothing says childhood like getting ready to watch this classic puppet show; even the thought of the animated dolls and the snapping of the crocodiles wooden mouth is enough to transport you back into the nostalgic days of your youth.

Lucky for you, you can now experience it all over again this summer! Bring along the whole family and don your best flapper dresses - go back in time at Firle Vintage Fair in East Sussex. Three jam-packed days filled with the best family-fun for all ages! Try your hand at the Charleston lindy-hop, fairy wand and fresh flower wreath-making and, of course, sit back and enjoy a performance of the traditional Punch and Judy show - that’s the way to do it!

But how well do you really know the classic puppet show? Here are six secret facts that are bound to impress you and your mini jesters.

Despite Punch and Judy being thought of as English, their origins actually lie in Italy! Punch was created by an Italian theatre company that emerged in the 16th century called Commedia Dell’arte. Commedia Dell’arte was famous for comic, pantomimic theatre that made use of improvisation and masks to create humour. Punch was therefore derived from the masked character Punchinello - a character which they created - developed from the word Pulcino, meaning chicken. Perhaps this explains Punch’s squeaky voice and curved, sharp nose!

2. A professor of puppets!

Punch and Judy is performed by a single puppeteer, typically, in a mobile theatre so that it’s easy to transport the show around. These puppeteers have been given the name of ‘professor’ since the Victorian times. There’s even a ‘Punch and Judy School of Professors’ - we’d like to enrol there! A professor is also usually accompanied by a ‘bottler’, essentially, someone who gets the audience going. Whether that be by playing music on a drum or guitar or engaging in humorous backchat with the puppets, the ‘bottler’ is bound to make you laugh and ignite excitement in the audience.

Prior to Punch’s rise to fame in his debut show ‘Punch and Judy’, he actually performed in the marionette shows of Martin Powell - a puppeteer who’s shows received great acclaim all around the globe and saw Punch grow popular amongst audiences. He even had a theatre named after him in 1738 when Charlotte Charke was granted a license to open Punch’s Theatre in St James Street! But shortly after, Charke found that marionette shows were too expensive to operate, so by the end of the 18th century, glove puppets took to the streets instead.

A swazzle (yes, you read that right) is a small device made of two strips of metal bound around a cotton tape reed - essentially, it’s a miniature kazoo. It is used and has been used for hundreds of years in performances of Punch and Judy all over the globe. Ever wondered how Punch’s distinctive voice is so raspy? You guessed it - a swazzle. Professors will position it at the back of their mouths which causes the reed to vibrate and produce Punch’s distinctive voice. And because the swazzle is so small there is a risk that professors could swallow it, so we don’t suggest you try this one at home!

Big fans of Punch and Judy will know that depending on which production you see, there may or may not be mention of Toby, Punch’s dog. But we bet you didn’t know that in the earlier performances of Punch and Judy, Toby was played by a small white dog, painted with black spots and dressed in a red and white ruff! He used to sit beside the theatre and greet audiences. Theatre and dogs - what’s not to like?

6. It's unlikely that you'll see the exact same production twice!

The basic premise and storyline of Punch and Judy will always remain relatively similar no matter what production you see. However, a lot of changes have been made since the original including the switch from devil to crocodile as an alternative that was more child-friendly. As well as this, productions are usually adapted to ensure that each performance remains topical and current. Professors can choose to put their own twist on things and jazz things up however they like making it hard to see the exact same production twice (unless you go back to the same place, of course). But one thing's for sure, if you see it at the Firle Vintage Fair it's bound to make you laugh your socks off and put a smile on your face so go back in time at Firle Vintage Fair and come and witness your beloved, troublesome duo - Punch and Judy!