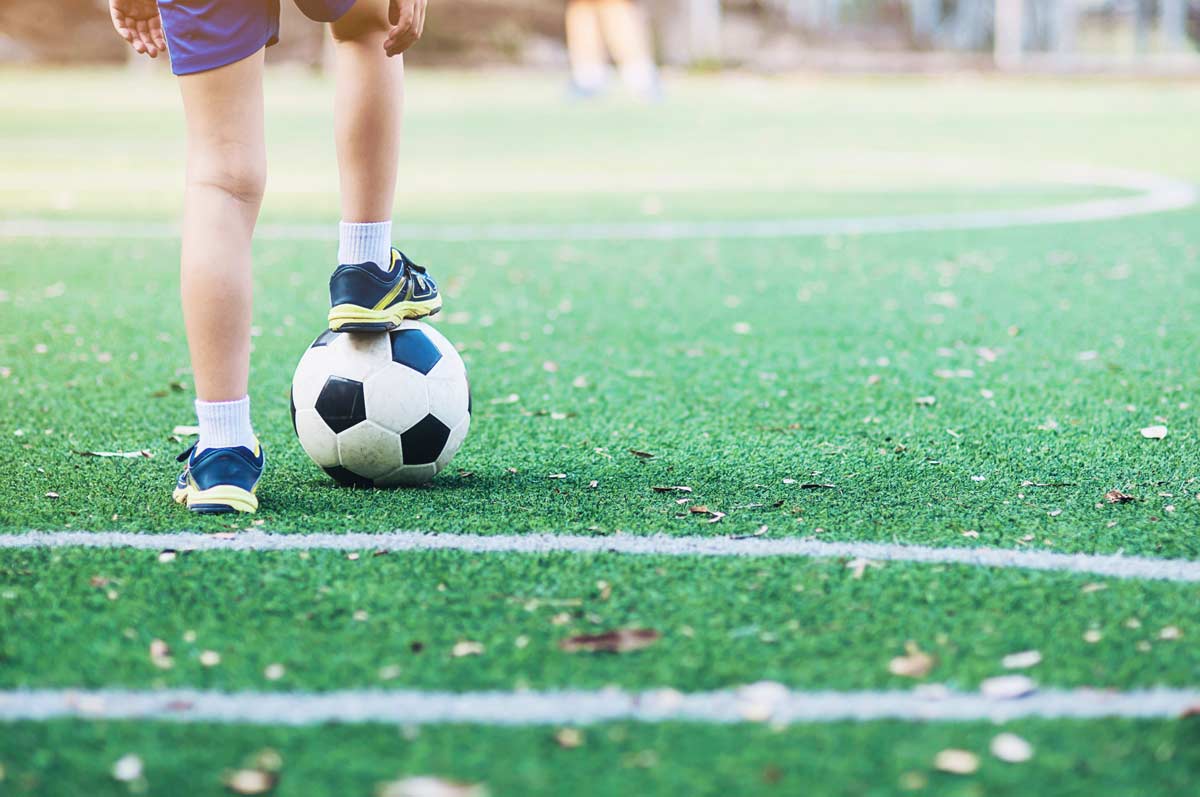 Get ready to score big on game day with these funny footballer puns and funny team names for your fantasy football league.

Football is the most popular sport in the world, and for good reason! It's been one of the ways people bond since back in medieval times, and even brought the opposing sides together in  World War One, where on Christmas day a truce was declared so that everyone could enjoy a kick about and a day of peace.

With no fancy equipment, it really is a game for everyone, as long as you have a ball and a few friends to run about with. As well as the fun of playing it, football has the power to bring us together to watch our favourite teams hash it out on the pitch.

When the football season starts, there's nothing better than celebrating with an extra large pizza and a group of your best mates to yell at the TV. There's no better feeling than being the one who gets everyone laughing when spirits are high, or consoling your team if you lose with a belly laugh over the opposing team's ridiculous nicknames. Make use of these puns about football to break tension between rival teams, and we're pretty sure you'll win the trophy for (hu)man of the match. Read on for some unique new ways to lovingly refer to your favourite football team name or players you like (or don't like). Start memorising them now, and you'll have no competition winning the goal of being the most popular person to watch the Premier League with. Not to mention how perfectly they lend themselves to being the ultimate fantasy football team names. You've guessed it, these football puns are going to propel you right to the top of the league, whether you like it or not.

For more sporty laughs check out these football jokes and these rugby jokes.

With the thousands of footballers out there, there really is no limit to the amount of funny footballer puns you can come up with. Next time you're watching a game, why not come up with some of your own?

1. I know a really untidy guy who is extremely good at football. He's a Messi guy.

2. I don't know about you, but I Casillas getting along pretty well.

3. If you want to get a hold of me while I'm watching the game, I guess you can call me on my Immobile.

6. You Khedira pin drop in this room.

7. Schurrle you can't be serious?

8. I've just started dating a famous footballer. He's so sweet and caring, he's the best, some would say he's a real keeper.

9. David Beckham was overwhelmed when he was granted a title by the queen. His team couldn't believe it. "Man, you knighted!" they shouted.

10. After he retires from football, Fabian Delph has decided to put his name to good use, and start a new career in Delph and safety.

11. The eskimo decided to quit playing football, even though he really was showing great promise. I don't know what to say, I guess he just wasn't Inuit.

13. I walked in on Rooney singing in his room once, it was so embarrassing. He was listening to Goals Aloud.

16. Jordan wasn't sure how to answer but his mum kept asking: "Ayew ready to find love?"

17. I'm always going to hold you Khedira to my heart.

19. Vincent Kompany is the clingiest footballer, he needs Kompany at all times.

21. André was still in bed when his manager knocked on the door and asked "Ayew ready to go?"

22. David De Gea's always struggled when the barber asks what he wants done. "Just da hair!" he repeats. "Yeah I know you are," replies the barber, getting frustrated.

26. I cleared away a Scottish footballer's drink once when I was working in a pub. I only realised what I'd done when I heard him shout, "where's McGinn and tonic?!"

27. Diego refuses to go to Starbucks. He thinks their drinks Costa fortune.

30. Tim Krul paid me a compliment once, and I was really excited that a popular football player noticed me. I was upset when he started laughing with his friends, it seems he had Krul intentions.

31. I started dating a famous footballer, and my best friend asked if she could come on the date with us. I told her sorry, two's Kompany but three is a crowd.

32. You need to be careful if you hang out with some footballers. I've heard Jason will Puncheon the face if you start telling football puns.

33. Giorgio got into serious trouble with his Italian Nonna when he told her he didn't like pizza or pasta. He couldn't lie to her any more, his favourite food was Chiellini con carne.

34. Christiano Ronaldo combs his hair every half time. He really doesn't want it to start getting Messi.

36. Cazorla is the best footballer to help you at Christmas time. If you ask him, he's bound to let you make use of Santi's little helpers.

37. Mario Balotelli has the worst taste in TV shows. I keep trying to make him watch grown up things, but he still thinks the Balotelli Tubbies are the best.

38. Zinedine always books a whole floor of a hotel when he stays, so he can do his dangerous dance routine. You better watch out if you ever go up there, I've heard that with his moves, it's murder on Zidane's floor.

39. Ibe got a feeling this is going to be a good game.

41. Ask any moth who their favourite footballer is, and you'll always get the same answer. They always love Frank Lampard.

If you love football, we're sure you have a favourite squad, and these puns are here to help you take out the competition by scoring you some serious laughs.

43. Man United players never stress out about a game beforehand. Their motto is Hakuna Juan Mata.

44. Guardiola is the best manager, he always gives the Man City team a great Pep talk in half time.

45. An Everton player's favourite breakfast is without a doubt Baines on toast.

46. If you're asking which philosopher was the best at football, there's one clear answer. Soccerates wins hands down.

47. Lazio fans only listen to Prince. They can't get enough of Purple Reina.

48. Watford have no chance of winning the league. Their best bet is to find a Deeney in a bottle.

49. There was uproar when the Barcelona team was found to be cheating. It was a farcelona.

50. The England team were not a fan of their new paper uniform. They thought it was absolutely tearable.

51. Arsenal fans can't stand when something isn't properly seasoned. They always ask for salt and Pépé.

52. If you invite a player from the Barcelona team round, it's considered rude not to provide tea and Busquets.