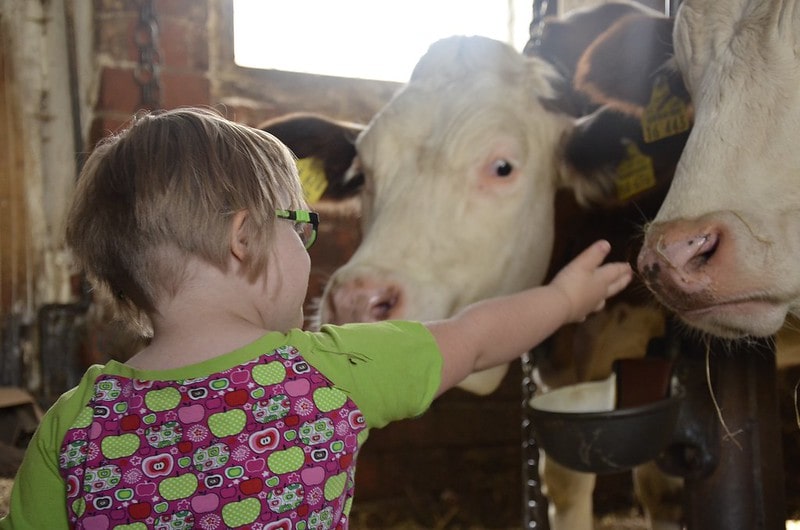 Everybody deserves a good giggle, and If you love horse-ing around, these farm themed jokes will be just your cup of tea.

When it comes to learning a language, farm animals are often the words young children love the most, and of course their accompanying sounds (cue a familiar deep-voiced mooooo). On top of this, the sky is truly the limit when it comes to farm-themed activities to support learning, from cute crafts to singing the classic nursery rhyme, 'Old MacDonald Had A Farm' on repeat.

Farms and their inhabitants have inspired plenty of hilarious farm riddles and jokes. So, we have rounded up the corniest ones for you and your kids right here. From jokes about the farmers themselves to classic chicken puns and laughing at the rest of their farmyard friends, here are some seriously quackers farmyard jokes.

Here's a mix of classic funny farming jokes from cow jokes, to those funny farmers themselves.

1. What did the farmer talk about when he was milking the cows? Udder nonsense.

2.  How did the farmer fix a hole in his trousers?  With a cabbage patch.

3.  Why did the farmer want to bury all of his money? To make the soil rich.

4. What did the farmer say when one of his cows escaped? It was a miss-steak.

5.  Why did the lamb call the police? He had been fleeced.

6. What happens when a dog eats nothing except garlic? His bark will be much worse than its bite.

7. What do you call a pig thief? A hamburglar.

8. What is a scarecrow’s favourite fruit? Straw-berries.

9. Where do farmers send their kids to learn? Kinder-garden.

10. Where do farmers get their medicine? A farm-acist.

11. What did the funny farmer say when she noticed she had lost her rake? Where's my rake?

12. Why does everyone love farm cats? Because they have so much purr-sonality.

14. Why do cows have hooves instead of feet? They don't have feet because they lactose.

15. What do you call an arctic cow? An eskimoo.

16. What do you call a cow sleeping at the farm? A bull-dozer

17. Did you hear about the magic tractor? It turned into a field!

18. What was the detective police duck trying to do? Quack the case.

19. Why is it hard to talk to goats? Because they are always kidding.

20. What kind of things do cows like to watch on TV? Dr Moo.

21. What did the farmer shout when the cow ran out of milk? This is udder nonsense!

22. Have you heard about the cow astronaut? He landed on the moooon!

23. What’s a cows favourite newspaper to read? The daily moos.

24. Why is there no point in telling a cow a joke? Because they have herd all the farm jokes before.

25. What kind of things do cows do for entertainment? They like to go to the moo-vies.

26. What's the name for a donkey with three legs? A wonk-ey.

Will you love these timeless knock-knock jokes? Lett-uce know.

Juicy see that pig fly over there?

‘Ears some sweetcorn for lunch!

If the farmer jokes didn't make you laugh, take a look at these chicken ones.

32. How do chickens bake a cake? From scratch!

33. What part of a chicken is the most musical? The drumstick.

34. What do you get if you cross a chicken with a cow? Roost beef.

35. Where can you find a chick with no legs? Exactly where you left it.

36. Why did the chewing gum cross the street? It was stuck to the bottom of the chicken’s foot.

37. Chickens wake up when the rooster crows, but when do ducks get up? At the quack of dawn.

38. Which part of a chicken has the most feathers? The outside!

39. Why did the turkey cross the road? It was the chicken’s day off.

40. What do you get if you cross two cocker spaniels, two poodles and a cockerel? Cockerpoodledoos.

41.  What do you say when it rains chickens and ducks? What foul weather.

Browse these hilarious horse jokes, and see if you think they are worthy of a “yay” or a “neigh”.

42. What sickness do horses hate the most? Hay fever.

43. What did the pony say to the mummy horse when it had a sore throat? I’m feeling a little hoarse today.

44. Why do farmers ride horses? Because they are just too heavy to carry.

45. Why do horses eat with their mouths open? Because they have terrible stable manners.

46. What kind of horse can run and jump higher than a skyscraper?

47. All of them, because skyscrapers can’t run and jump.

48. What do you give a sick horse? A spoonful of cough stirrup.

49. What kind of horses only go outside at night? Nightmares.

50. What's the name for the horse that lives next door? A neigh-bour.

51. What is a horse’s favourite sport? They love to play stable tennis.

52. What’s the difference between a horse and bad weather? One rains down and the other is reined up.

Get ready to roll your eyes at these classic funny short jokes.

54. What kind of ties do pigs like to wear? Pigs-ties.

55. What do you get should you cross a teddy bear with a pig? A teddy boar.

56. What do you get when you cross a pig with a dinosaur? Jurassic Pork.