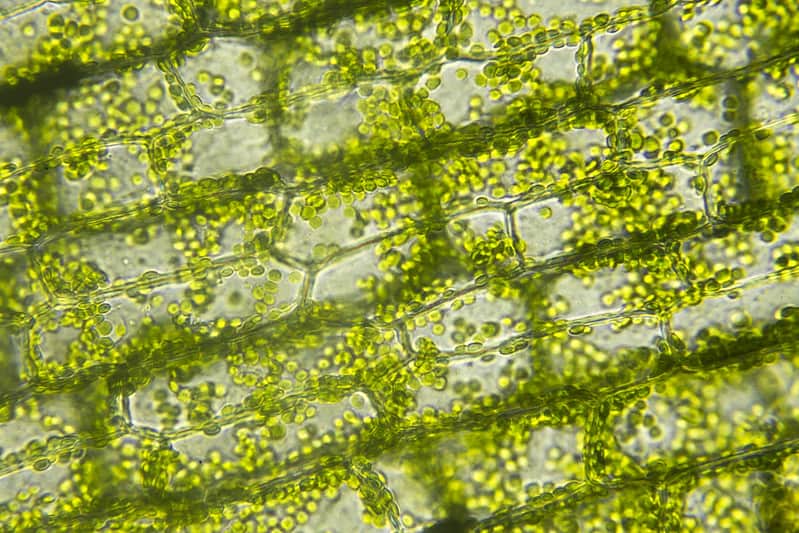 If you have children of primary school age, their science lessons will soon start focusing on the biology of plants, photosynthesis and the fascinating and highly important functions of chloroplast.

So what are chloroplasts? A chloroplast is an organelle, found in the plant cell.

The main function of a chloroplast is to aid with photosynthesis by absorbing light energy. Another function of chloroplast organelles is protecting the plant from unwelcome pathogens that can cause disease.

There is an important molecule found within the chloroplast itself, called chlorophyll. Chlorophyll absorbs the light energy from the sun, and uses this energy to 'synthesise' carbohydrates from carbon dioxide and water. This is how the plant creates the energy it needs to sustain life. This process (called photosynthesis) of removing carbon dioxide from the atmosphere and releasing oxygen is essential for keeping us alive too!

It seems to be rare (unless you are a scientist, biologist, gardener or botanist, of course!) that this kind of information sticks around into adulthood. But don't worry - we have gathered some key facts to help you to help the kids with their science homework.

Before we can get into our fun facts about chloroplasts, we need to know what a chloroplast looks like. This diagram shows a cross section of the chloroplast, and what it is made up of.

Outer Membrane: The main protective shell of chloroplasts, the outer membrane is permeable meaning small molecules can pass through it.

Inner Membrane: Another layer of protection, the inner membrane controls which molecules can get in and out of the structure.

Intermembrane Space: This is the minuscule space between the inner and outer membrane, it is only around 10 to 20 nano-metres wide.

Stroma: This is a gel-like alkaline fluid that surrounds the thylakoids and other structures within the cell such as the ribosomes, DNA and plastoglobules.

The Lamella: These are the bridge-like pieces which help the thylakoids to spread out, this allows the chlorophyll to absorb as much light energy as possible.

1. The 'chloro' part of the word chloroplast is derived from the Greek 'chloros' which means green.

2. All green plant cells and algae contain chloroplasts but they are not found in any animal cells.

3. It is estimated by scientists that a single square millimetre of an individual green leaf can contain around 500,000 chloroplasts.

5. The outer membrane, inner membrane and the intermembrane space are collectively called the 'chloroplast envelope'.

6. Chloroplasts are able to wiggle around within their plant cell to find the best spot for absorbing sunlight.

7. Chloroplasts are sometimes referred to as the 'kitchen of the cell' because they are responsible for storing (and synthesising) food.

8. The stroma in a chloroplast is also known as 'the matrix'. This is where the synthesis of carbon dioxide, starch, sugar, and fatty acids occurs.  This process is controlled by lots of factors including light, temperature and even the length of the day, so in summer it will differ to in winter, for example.

9. If the plant is attacked by a pathogen of some kind, the chloroplasts will respond by producing enzymes which warn other plant cells about the invasion so they can help to contain the attack.

10. Alternatively chloroplasts can carry out a 'hypersensitive response'. This is when the chloroplasts initiate a process called 'programmed cell death' or 'PCD'. This shuts down the system enough to kill any intruding pathogens, kind of like a partial self destruct mode, allowing the other cells to start preparing defence molecules to eliminate the pathogen.

11. There are mixed opinions on who discovered this tiny structure and called it a chloroplast. Officially, Russian biologist Konstantin Mereschkowski was credited with the 'discovery' in 1905.

This translates to: carbon dioxide plus water produce a carbohydrate plus oxygen. So basically, the chloroplast can convert carbon dioxide and water into sugars and oxygen, smart!

13. Ever wondered why chloroplasts are green? Green light is actually damaging to chlorophyll and it is unable to absorb it. Therefore the chloroplast appears green as we humans can see the green light being reflected back to us (all of the other colours of light have been absorbed!)