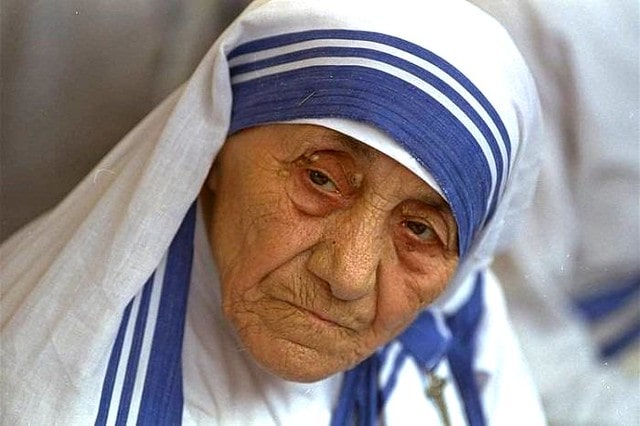 Lots of children love learning about the work of Mother Teresa at school.

Mother Teresa did a lot of charitable work to support children and children's charities, particularly in India. She also did a lot of work to open orphanages, hospices and places or the homeless to live all over the world.

If you and your family are looking to learn more about India together we have lots more great resources to help you discover this fascinating place.

But for now, we've put together a selection of facts about Mother Teresa (as well as a quick timeline of her life) that will engage and satisfy your kids' curious minds. Read on to learn more St Teresa of Calcutta facts!

1) Mother Teresa was born in North Macedonia on 26 August 1910. Her parents were called Nikolle and Dranafile Bojaxhiu.

2) Mother Teresa had two sisters and was the youngest of the three girls. After she left to join the Sisters of Loreto she never saw her mother or her sisters again.

3) She said that she felt drawn to being a Roman Catholic Nun from the age of 12. As a child, she loved the stories of missionaries who travel the world to spread Catholicism. A missionary is someone who tries to spreads their religion all over the world.

4) Mother Teresa's real name was Agnes Gonxha Bojaxhiu. She chose the name Mother Teresa after she spent time in Ireland at the Institute of the Blessed Virgin Mary.

5) Mother Teresa was fluent in five languages! These were English, Hindi, Bengali, Albanian and Serbian. This helped her communicate with lots of people from different communities and backgrounds.

6) She was awarded the Nobel Peace Prize in 1979 for her services to charity and the poor.  She told the Noble Peace Prize committee that she didn't want a large celebration dinner and that the money that would have been used for the dinner should be donated to the poor of Kolkata and charity.

7) Before Mother Teresa started her charitable work full time she was the Headmistress at Loreto-Convent School in Kolkata.  She worked as a teacher at this school for almost 20 years. She left the school because she became more concerned about the poverty surrounding the school.

8) Most of Mother Teresa's work for the poor and the unwell was done in India. She focused on helping people who lived in slums in Kolkata. The living conditions in slums are very poor, most people who live there do not have running water or places to properly go to the toilet. This means that diseases and illness spread quickly.

9) Lots of Mother Teresa's work focused on helping children who were poor and unwell. She also started street schools and orphanages to support the local children in Kolkata.

11) Mother Teresa was asked to speak at the Vatican and at the United Nations. This is an opportunity that only a few very influential people are given.

13) She had a state funeral in India, which means that the government of India felt she was an important enough person in their country to pay for her funeral and make sure important people in their government paid their respects to her.

15) There have been many roads and buildings named after Mother Teresa during her lifetime and after her death. For example, Albania, the modern name for the country she was born in, have named their international airport after Mother Teresa.

1922 - At the age of 12, Mother Teresa feels that she is going to devote her life to religious service.

1928 - Mother Teresa leaves home to go to Ireland and join the Sisters of Loreto. She learns English here and plans to travel to India to join other missionaries.

1931 - Mother Teresa takes her religious vows, this means that she became a Catholic nun and dedicated her life to her religion.

1937 - Mother Teresa is a teacher at a convent school in the east of Kolkata.

1944 - Mother Teresa becomes the Headmistress at the Loreto Convent School and continues to be upset by the poverty surrounding the school.

1946 -  On a train journey from Darjeeling Mother Teresa feels a call to serve the poor.

1950 - Mother Teresa gets permission from the Vatican to start her organisation the  'Missionaries of Charity'.

1952 - Mother Teresa opens a hospice in a Kolkata with help from Kolkata officials.

1965 - Missionaries of Charity open a house in Venezuela for the poor and needy of the city.

2015 - Mother Teresa is made a Saint by Pope Francis. A process known as canonisation.