9 Great Family Outdoor Games To Play In The Park 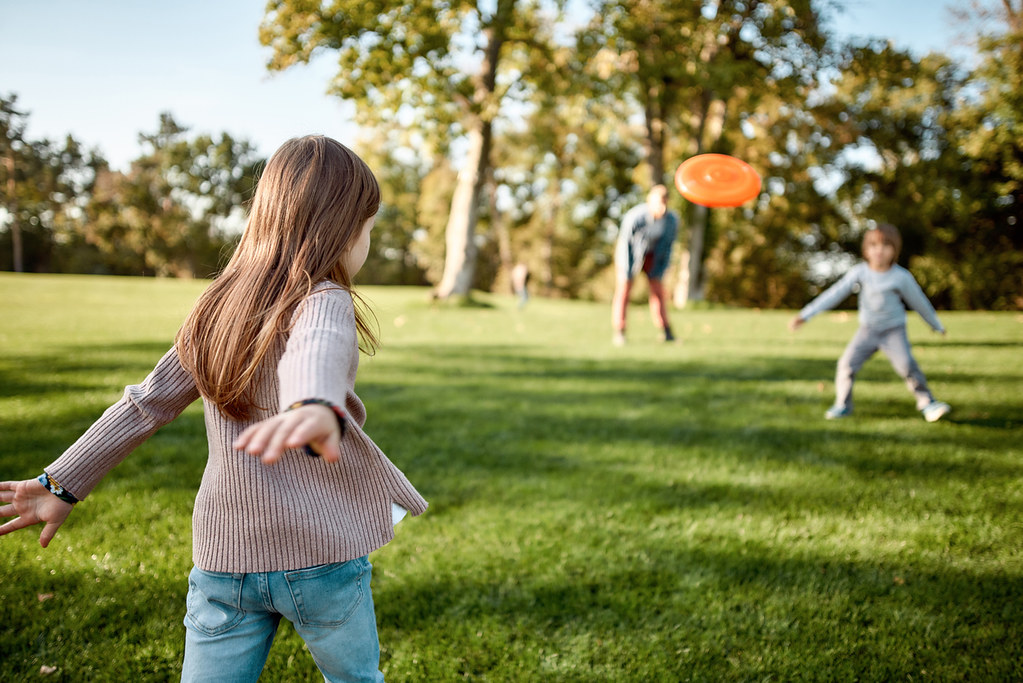 If you're looking to get out in the fresh air and spend some time in the park, we've put together a list of some great games your family can play to pass the time.

Following government advice, families in England can now spend unlimited amounts of time outside, as long as they maintain a social distance from anyone outside their household. Do make sure you check the current guidelines before you travel to any green spaces, and if you'd rather stay closer to home then we've got plenty of things you can do in your own garden, from outdoor games to building a bug hotel.

It's one of the most classic outdoor games for kids and one you've probably played hundreds of times before but there's a reason it's so popular! It's an easy way to get everyone moving and running around. One person is 'it' and just has to tag someone else so that they become the next tagger. It works best in quite big open spaces so if you're worried about finding a spot that is distant enough from anyone else, why not adapt the game and play the Stuck In The Mud instead. It involves less running because once you're tagged, you're stuck until another player crawls under your legs!

Piggy In The Middle

This is one of the best outdoor activities for kids who are trying to work on their coordination, you just need a ball and at least three people to play. Two or more people pass the ball between them while the 'piggy in the middle' tries to intercept their passes, and when they do, they swap places with whoever last threw the ball. If you're playing as a family then you can stand in a circle. Adjust how far you're passing depending on how much space you have and to make it more fun and less competitive, just take turns to be the piggy.

You don't have to be keen cricketers for this one. French cricket is really easy and perfect for kids over six, all you need is a cricket bat and tennis ball. Whoever is the batter should stand in the middle whilst everyone else stands in a circle around them. In this game, the batter's legs below the knees are the wicket and so they need to use the bat to try and protect them. However, anyone in the circle can bowl and the batter can only move their feet to face them if they managed to hit the ball! That means sometimes they won't be facing the direction the ball is coming from and will have to try and hit it in a bit of a twist! If someone catches the ball before it bounces then that also gets the batter out. This is one of our favourite outdoor games for kids, it feels a bit more like a sport but is still great fun.

This is a great one for any little kids because it's so simple and doesn't need any equipment. You just need to stand in a line with the person at the front acting as the leader. The leader walks around the park with everyone following and copying different actions as they go. This can be anything from head tapping to skipping or jumping but every so often the leader should turn around and the rest of the group need to stay as still as possible. If anyone moves or wobbles, they need to head to the back of the line. Make sure the kids get to have a go at being the leader!

One of our favourite outdoor activities for kids is skipping! Grab a jump rope and let them start practising. It's a good option if you don't have much space and a great one no matter how many people you've got because it works individually or in a group, with two people holding each end of the rope while someone else jumps. Play a game and see who can get the most jumps without stopping or work on a few tricks.

Bat and ball is one of our favourite outdoor games and although we normally play it on the beach, this summer it might have to happen in the park. You just need a simple paddle bat and ball set to play, get outside, have a rally and see how many times you can hit the ball between you without dropping it. It's less competitive than tennis but a great game to pass the time because it involves a bit of concentration.

A scavenger hunt is a brilliant idea for some outdoor play. Write a list of things to find before you leave the house and when you get to the park, see who can find everything on the list first. You can all get involved or leave it to the kids to be the hunters. If you've got little children then it might be a good idea to break the game down so you tell them what to find one thing at a time, rather than giving them a long list. Daisies, a feather, different coloured leaves and small pebbles are all good things to put on your list. This is one of the best games for kids who can't sit still and a great option if you don't have lots of space immediately around you because you can play it on the move from a social distance.

Hide and seek is one of the easiest outdoor games for kids. You might have played it a few times at home during lockdown but playing outside adds a whole new element of fun. It's a chance for your kids to really explore, try and encourage them to be creative with their hiding spots and see if they can find secret spaces like a hollowed-out tree or a patch of grass tucked away behind a bush. It's a good idea to set some boundaries to the game otherwise you could end up with someone hiding all the way over on the other side of the park! If you have any younger children playing then get them to hide with someone else, just to be safe.

If you're lucky enough to have a large amount of outside space to yourself then frisbee is a great option. It's one of the best outdoor games for kids because it'll help them to work on their coordination and, depending how good your throws are, get them moving around a bit. This is another one you can play with just two people or get everyone involved in. You could even turn it into a bit of a tournament and get the everyone to challenge the winner of each game.

What Is The Chunking Method?

10 Best Facts About The Asthenosphere For Kids

50 Best Football Jokes That Will Make The Crowd Go Wild