Can You Keep a Secret? Uncover Centuries of History on the Golden Hinde 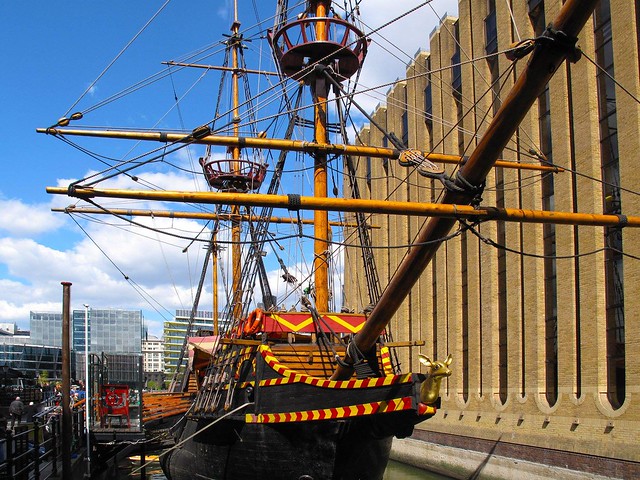 A visit to the Golden Hinde in London will make for more than just a day of exploring an old galleon. You won’t have to worry about boring guides talking you through the most snooze-worthy facts about life at sea. Your guides are three quirky characters dressed in Elizabethan costume, ready to welcome you to a day or night of “living history”, where you’ll experience what life was like on the open waves for the hardy seafaring folk. “Our four-year-old was absolutely taken in by the characters and the adventure on board,” said one of one Krishna Thaker.

A trip to the Golden Hinde is so much more than a simple history lesson, and here’s why.

The Golden Hinde – more than just a replica

The Golden Hinde in London may be a reconstruction of the original, which confusingly was first known as the Pelican, before being renamed the Golden Hinde in 1578, but that doesn’t mean it doesn’t have its own stories to tell. The journeys this reconstruction has undertaken aren’t quite as arduous and ambitious as its namesake yet it’s still travelled to several corners of the globe. Since her launch in 1974, she sailed from Plymouth to San Francisco on her maiden voyage, and went on to travel as far as Japan, St. Thomas and Panama, before berthing in London in 1996.

The carrier of six tons of treasures

The original Golden Hinde was famous for many things, including its ability to carry up to 100 tons of weight. This came in particularly handy on March 1, 1579, when Sir Francis Drake and his men captured the Spanish ship, Nuestra Señora de la Concepcion, and subsequently struck gold: a treasure that included more than 360,000 pesos at six tons in weight. Queen Elizabeth I was delighted to receive 160,000 pesos upon Sir Francis Drake’s return, allowing her to pay off her foreign debt.

Sir Francis Drake was one of the most renowned seafarers of his time, having circumnavigated the globe in just three years – a great accomplishment back in the day. He was feared by the Spanish, earning him the nickname, “El Draque”, meaning “The Dragon”. Book an Overnight Living History tour on the Golden Hinde, where your kids will get to spend a night in the authentic sleeping quarters where The Dragon and his fleet once dreamt of great fortune and status. After a meal fit for pirates and an exciting lesson in lightning-quick gun drills, you and your crew are free to huddle around on deck where the ship’s Master, the grisly Barber Surgeon and the crazy Gunner will share captivating and gory stories about life at sea. “Our kids learnt a huge amount - they haven’t stopped talking about it since and have asked if we can go again!” said Hannah Feldman, mum of three.

Rebecca loves getting out and about with her little family, exploring all the fun and fabulous things London has to offer, from dinosaurs at the Natural History Museum to baby discos, treausure hunts and toddler balance biking at the Velodrome. When she's not running around after a toddler, Rebecca loves striking a zen yoga pose and cooking up a feast.

50 Fun Books For Early Years Kids (Aged 3-4)
15 Best Musical Books For Babies
15 Great Rhyming Books For Toddlers
Choo Choo: Find A Miniature Railway Near You In London
Top Family Days Out In Huddersfield
17 Puurrr-Fect Children's Books About Cats
7 Things You Didn’t Know About Rainbows
Socially Distanced Legoland: How To Make It Work For You
Explore Kidadl

Woburn Safari Park Or Whipsnade Zoo? Where To Go