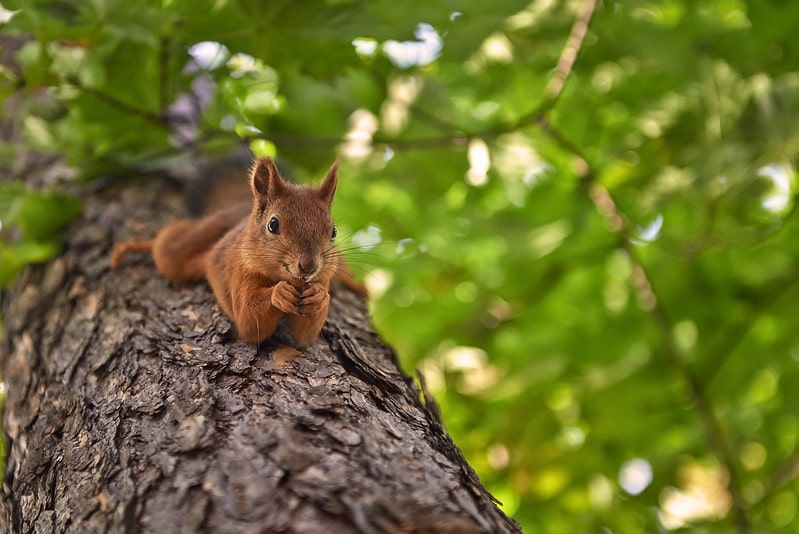 Wildlife fans and lovers of all things funny will want to store up these nuts squirrel jokes; it's always good to have plenty of funnies to feast on during times of humour hibernation.

There's certainly no shortage of funny squirrels and there are lots of funny squirrel jokes, but the cheeky little chappies are so much more than mere masters of comedy.  Squirrels are incredibly intelligent, they are amazing acrobats, and, best of all (in our opinion) they can turn their tail into a parachute. We hope you like these squirrel jokes!

Fact One: There are 280 species of squirrel.

Fact Two: Squirrels front teeth never stop growing. They gnaw on nuts and other things to stop them getting too long.

Fact Three: Squirrels live in every part of the world, apart from Australia and Antarctica.

Fact Five: Squirrels don’t dig up all of the nuts that they bury, which is why we get new trees growing.

1.-I was trying to come up with a few squirrel puns to make you laugh, but they were all too nutty.

3.-A wise squirrel once said "you are what you eat". He was nuts.

4.-Squirrels are very good at explaining things, because they give it to you in a nutshell.

5.-Maybe nut today, maybe nut tomorrow, nuts soon.  And for the rest of your life.

6.-How do squirrels remember where their nuts are buried? They use acorn-yms

7.-Why didn’t the squirrel eat the macadamia? It was a tough nut to crack.

8.-What do you get if you cross a squirrel with an elephant? An animal that never forgets where it’s hidden its nuts.

9.-Have you heard about the new squirrel diet? It’s just nuts.

10.-What smells like nuts but is impossible to see? Squirrel farts.

11.-What did the father squirrel tell his family? Acorn-y joke.

12.-What did the squirrel wear on her feet? Cashews.

13.-Why don’t squirrels have any friends? Because they drive everyone nuts.

14.-How can you catch a squirrel? Climb up a tree and act like a nut.

The Life Of Squirrels Jokes

15.-What type of TV do squirrels watch? Nut-flix.

16.-Why did the squirrel bury the tin of fish? Because tuna spelt backwards is “a nut”.

17.-Why don’t squirrels have any friends? Because they drive everyone nuts.

19.-Why did the squirrel take her car apart? She wanted to see what it was like to get to the nuts and bolts of it.

20.-Why did the squirrel get lost in the woods? It lost track of time and followed the wrong root.

21.-What happens when more than one squirrel acts like a nut? There ends up being a squarrel.

22.-Why are so many squirrels rich?  Because they are good at squirrellin away their money.

23.-What did the romantic squirrel give to his girlfriend on Valentine's Day? Forget-me-nuts.

24.-Where do squirrels go for their summer holidays? To beech trees.

25.-What did the racing pigeon say to the racing squirrel? Don't act like a nut and try to beat me because you walnut be able to go faster than me.

26.-What did the squirrel say when he was late for work? I’m so sorry, but the traffic was nuts.

27.-What did the squirrel say to the psychologist? I think I’m nuts.

28.-What did the squirrel say the time she managed to accidentally catch her tail in the door? It won’t be long now.

29.-What did one squirrel say to the other squirrel when they went to the cinema?  I love our dates and I'm nuts about you.

30.-What did the squirrel say when he had to decide whether to stay or jump? I’m really on the fence about this one.

31.-What did the squirrel say to the police dog?  Stop barking up the wrong tree and don't act like a nut.

32.-Why did the bank manager ask the police to help him catch a squirrel?   Because the squirrel was suspected of foraging cheques.

33.-What did the first squirrel say when the second squirrel put twigs in the frying pan?  What on earth are you doing? This is a non-stick pan!

34.-What do you call a squirrel who is in charge of a bank? A branch manager.

35.- If a squirrel and a raccoon were playing scrabble, who would win? The squirrel, because it has a 'Q'.

36.-What is a squirrel's favourite number? Tree.

37.-What do you call a squirrel that solves crimes? Squirrel-lock Holmes.

38.-What do you call a squirrel that goes to space? An astro-nut

39.-Why did the squirrel bury her lottery tickets under a bush? She was hedging her bets.

40.-Why did the squirrel blush when she had been hit by a car? Because she felt flattered.