The Best 61 Sports Facts For Kids 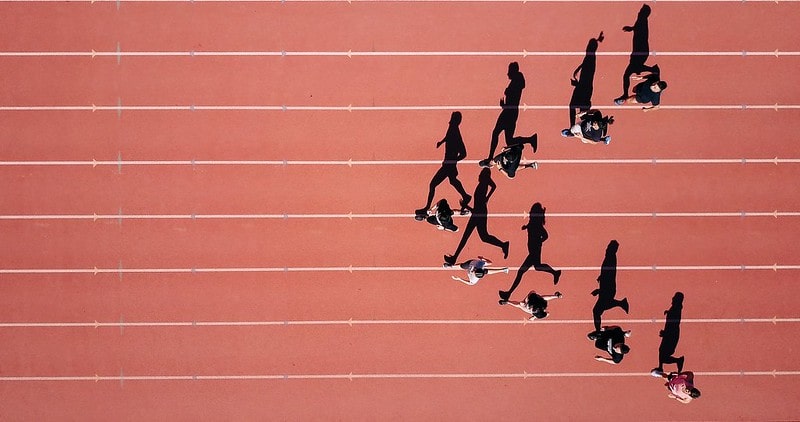 For sports lovers, budding athletes and curious kids, we hope you're ready for some epic sports facts.

Did you know that the earliest documentation of sports was around 3000 years ago? We've come a long way since then, so let's take a look at some awesome sports facts.

Wondering when the first official sports took place? Curious about the World Cup or Super Bowl? Find out more some fantastic fun sports-related facts that you might not know.

1) According to the World's Sports Encyclopedia, there are over 8000 sports!

2) The first sport as we know it today was most likely wrestling, and it originated in Greece in 776BC.

3) The diameter of a basketball is half the width of the hoop... that means two balls could fit side by side!

4) Modern swimsuits have become so advanced that some of them move faster in water than human skin. Some people think that the more a swimsuit covers your body, the greater your advantage when swimming in the water.

5) Sheffield FC is the world's oldest football club, founded in 1857.

6) A badminton shuttlecock weighs between 480 and 540 grams.

These fun facts about sports will definitely appeal to fans of the weird and wonderful.

8) Olympic Gold Medals are made, mostly, of sterling silver, not gold. In fact, they haven't been made of pure gold since 1912!

9) Golf balls have around 336 dimples. That's the average, but there's no limit to the number of dimples. There can be between 300 and 500. Their purpose is to make them travel further in the air.

10) Ski ballet was once a competitive sport. It was even a demonstration sport in the 1988 and 1922 Winter Olympic games.

12) The average lifespan of a Minor League Baseball ball is five to seven pitches.

14) Until 1850, golf balls were made from leather, stuffed with feathers.

15) The phrase about winning 'hands down' was initially in reference to a jockey, who would win a race without pulling the reins of his horse or whipping his horse.

16) The average distance a person walks in their lifetime is four times around the whole world.

17) There are only eighteen minutes of action in the average baseball game.

18) The grass at Wimbledon used to be around 5cm long until an English player was bitten by a snake in 1949. Now, it's 8mm long.

19) Sports have been played in outer space - yes, a golf ball was hit by Alan Shephard, and a javelin thrown by Edgar Mitchell on the moon, in 1971.

20) In the 1928 Olympics, Australian rower Bobby Pearce won his race against eight others, even though he stopped to let ducks pass him during the race.

21) It is customary for jockeys to be paid in coins, no matter how much they win!

22) The Stanley cup was originally two storeys tall before people realised it was a bit too difficult to transport.

23) The first rugby club was created in 1843. Guy's Hospital Rugby club was formed in London, by boys from Rugby School.

24) In 1895, volleyball was invented in Holyoke, Massachusetts, USA.

25) Orienteering was invented in Sweden.

26) The Green Bay Packers won the first-ever Super Bowl, which took place in 1967. There have since been 52 Super Bowl championships and the Packers have won three more since.

28) The oldest sports in the world are thought to be wrestling, running, javelin throwing, polo and hockey.

29) The most dangerous sports in the world are thought to be running, scuba diving, canoeing, Grand Prix racing, and extreme mountain climbing.

32) The most points ever scored in a basketball player's career is 38,387, by Kareem Abdul-Jabbar of the United States.

34) Ben Smith holds the world record for the most consecutive marathons, having run 401 marathons in 401 days, covering 10,506 miles altogether.

35) The longest boxing match in history lasted 110 rounds and went on for over seven hours. It was played in 1893 by Andy Bowen and Jack Burke.

36) The longest tennis match lasted eleven hours and 5 minutes. It was played by John Isner of the USA and Nicolas Mahut from France.

37) The world record for the longest bow and arrow shot us held by Matt Stutzman from the USA, with a distance of 283.464 metres.

38) Michael Jordan holds the record for the most consecutive games played with at least 10 points scored - the record is 866.

39) Grete Waitz has won more New York City Marathons than anyone else. With nine victories under her belt, they were all set between 1978 and 1988.

40) The fastest Mixed Martial Arts knockout of all time only took two seconds! It was set by Ryohei Masuda, and Takahiro Kuroishi received the blow.

41) The Professional Golfer's Association record for the highest score on a Par-4 is 16, and was set in 2011 by Kevin Na, a Korean American professional golfer.

43) In the year 1959, Pelé scored 127 goals, more than any other football player in a single calendar year.

44) Byron Nelson has won more Professional Golf Association tours back-to-back than any other professional golfer. In 1945, he won 11.

45) Martina Navratilova has won six Wimbledon titles in a row. Unbeaten in this streak, she set the record between 1982 and 1987.

46) Rocky Marciano holds the career heavyweight boxing record, with 49 victories, 43 of them being knockouts. This record was set between 1948 and 1956, without any losses.

47) Sebastien Vettel, the Formula One driver, claims to tuck lucky coins into the shoes he races in.

48) Michael Phelps has more medals than the country of Mexico. With 28 gold medals, he is the most decorated Olympian of all time.

51) The colours of the Olympic rings represent the flags of every country competing at the Olympics in 1912, the year that they were designed. They were designed by Frenchman and founder of the International Olympic Committee, Baron Pierre de Coubertin.

52) The Summer Olympics of 1956 were held in Australia and Stockholm. The main host, Australia, couldn't host the equestrian events because of their tough quarantine laws, so those were held in Sweden, five months early.

53) London, United Kingdom, is the only city to have hosted the Olympics three times.

54) The first modern Olympics were held in Greece in 1986, but the competitors were only men. The first Olympics to feature women athletes were in Paris, in 1900.

55) Before gold, silver and bronze medals, the prizes for winners at the ancient Olympics was a simple Olive branch wreath. Sometimes, it would be sprayed with gold, other times, not.

A record is typically broken in a matter of years, whilst others stand for decades. Take a look at these incredible records that have been challenged for several years, and find out whether they have been broken or not!

56) The UK's Jonathan Edwards was the first person to jump 18.29m in the triple jump. This record was set in the 1995 World Championships, held in Gothenburg.

Still Standing? Yes, the record has been standing for 25 years.

Still Standing? Yes, the record has been standing for 32 years now.

60) Extreme Ironing. Extreme ironing involves pressing a shirt in a variety of, you guessed it, extreme settings.

61) Cycle Ball. Think cycling and football. Players must ride around a small court, trying to hit a ball into a gall using the wheels of the bike alone. Their feet can't be on the floor while they play, and there are only two players on each team.