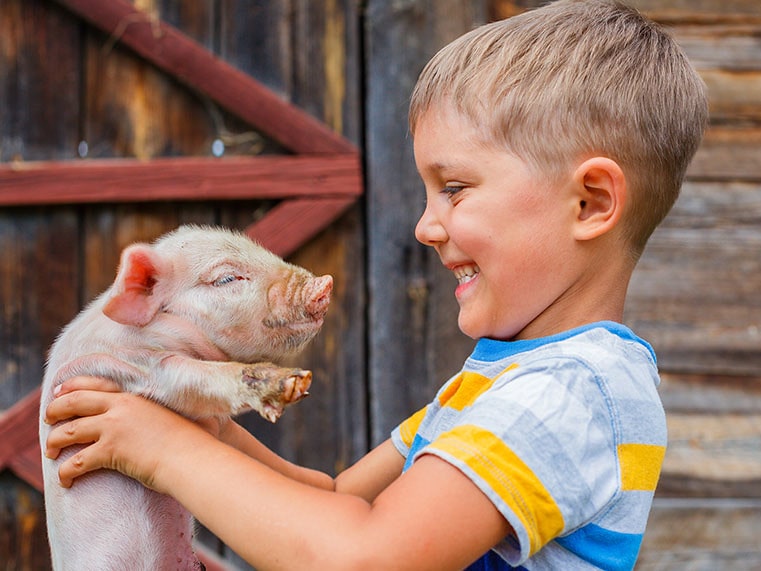 If you love farm animals, pigs and a good old snort laugh, this list of pig jokes, piglet jokes and more will surely make you laugh out loud.

Pigs are really intelligent animals! Their pig snout is really important for finding food and sensing the world around them.

They are also really funny animals, read the pig jokes below to find out!

You ask the question, we tell you the answer. Then you laugh out loud!

1.How do MI5 pigs write top secret messages to one another? Through invisible oink!

2.What happens when you play Tug-of-War with a pig? Pulled-Pork!

3.What do you get when you cross a frog and a pig? A lifetime ban from the Muppet Show studio.

4.What do you call a pig with no legs? A groundhog.

5.Why was the pig given a red card at the football game? For playing with dirty tactics!

6.What do you call a pig that drives around recklessly? A road hog.

7.What do you call a pig with a poorly throat? Disgruntled.

9.What do you get when you cross a pig and a cactus? A porky-pine.

10.A pig just won the lottery. What do you call him? Filthy rich!

11.What do you get if you cross a dinosaur and a pig? Jurassic pork!

12.What happened when the pig pen broke? The pigs had to use a pencil!

13.Why did it take the pig hours to cross the road? Because he was a slow-pork!

14.What did the little piglet want from the swine? A piggyback ride home.

15.Why should you never ever tell a pig a secret? Because they love to squeal out loud!

16.What do you call a pig that gets the test answer wrong? Mistaken bacon.

17.What do you get if you cross a pig and a tortoise? You get a very slow-pork.

18.Where do flying pigs go? Hogwarts.

19.How do you stop a warthog from charging? Remove his credit card!

20.What would happen if pigs could fly? The price of pork would go skyrocket.

21.What do pigs bring to the beach? A surf-boar-d

22.What is a pig's favourite sport? Mud wrestling.

23.What is the most common Halloween outfit for a pig to dress up as? Frankenswine.

24.What did the pig exclaim when the wolf grabbed its tail? "That's the end of me!"

25.How to pigs greet their family and friends? With hogs and kisses.

26.What was the pig's favourite ballet? Swine Lake.

27.What do pigs do on the evening of February 14th? They have a valenswines dinner.

28.Why should you not play basketball with a pig? Well, he'll hog the ball.

29.Why should you never share a bed with a pig? Well, they'll hog the covers!

30,What do you call a pig with three eyes? A piiig!

31.What do you get when you cross a pig and a centipede? A bacon and legs!

32.What do pigs call the washing machine? The hogwash.

33.Why are books about pigs so interesting? There's always a twist in the tale!

34.How do pigs talk to each other? Swine language.

35.What do you call an angry pig? Disgruntled.

36.What do you get when you cross a pig and superman? The Man of Squeal.

37.What was the pig doing in the kitchen? Bacon!

38.What do you call a pig who can't mind his own business? A nosey porker!

Knock knock! Check out these pig jokes and we'll make sure you roll on the floor laughing!

Pig me up at seven o’clock.

Pig on someone your own size!

These conversational jokes about pigs are hilarious to tell to friends, they're great little story jokes.

He said, "No, I'm the little pig that went wee wee wee all the way home”!

42.The religious cowboy lost his favourite Bible while he was out on the range one day. Three weeks later, a pig walked up to him carrying the Bible in its mouth. The cowboy was flabbergasted. He took the precious bible out of the pig's mouth, raised his eyebrows and said, "It's a miracle!"

43.In the cold of winter, a man says to his girlfriend: "Should we bring the pig inside, it's so cold out there." "But it stinks!", says the girlfriend.

The husband replies: "He will get used to it!"

44.While driving in the city, a policeman stops a woman in a car with a pig in the front seat. "Um, what are you doing with that pig?" He says, "You should take it to the zoo." "Okay officer, will do", exclaims the woman and she smiles! The next week, the same policeman sees the same woman with a pig again in her front seat, but both of them wearing sunglasses, the policeman thinks she's trying to disguise herself! "I thought you were going to take that pig to the zoo!" he says.

The woman replied, "I did. We had a great time! Now we are going to the beach this weekend!"

These pig-tastic pig jokes are guaranteed to make you laugh!!

45.Yesterday a pig showed me round his new home. Actually it was quite sty-lish.

46.What do you call a pig who steals? A hamburglar.

47.Why did the pig cross the road? He got BOARed of the other side.

48.What's the name of the smartest pig in that ever lived? Ein- swine.

49.How do you take a poorly pig to the hospital? In an hambulance!

50.What treatment do pigs get when they are ill? Oinkment!

51.What else do you call the story of The Three Little Pigs? It's a pig tail!

52.What happens when you put a pig in a musical? It squeals the show.

54.What do you get if you cross between a pig with a dinosaur? A porkasaurus rex!

55.What do you call a pig with a rash? Ham and Eggs-czema.

56.Why did the farmer call his pig an ink? Because he always ran out of the pen...

57.What happens when a pig mixes two colours together? He makes a pigment!

58.Where do pigs get together for a laugh? The meet market.

59.Where can a pig go to see the statue of Liberty? New pork city!

60.What do Bad Piggies like to do at the theatre? Squeal the spotlight.

62.What do you call a fashionable pig? Calvin Swine.

63.Which Star Wars character was really a pig? Ham Solo.

64.What do piglets do after school? They do their school hamwork!

65.What was the pig’s favourite Shakespeare play? Ham-let!

66.What do pigs call the creation of the Universe?The Pig Bang Theory.

67.How do you fit more pigs on the farm? By putting up a sty-scraper!

68.When it's nice and sunny, what do pigs like to do? Go for a pignic!

69.What kind of truck does a pig like to drive? A pig-up truck.

70.What instrument is most commonly played by pigs? Pigcussion.

71.What sporting event do pigs attend every four years? The Olympigs.

72.Where do pigs go on their summer holidays? to a tropigal island!

73.One of the greatest pig painters in the world is called? Pigcasso, of course!

74.Why did the police officer arrest the pig? He was a pig-pocket...

75.Which US president was really a pig in disguise? AbraHAM Lincon!

76.Where do pigs leave their cars? A porking lot!

77.Why did the pig lose the race? She pulled a hamstring.

78.What did the pig say to the other pig on Valentines? Don't go bacon my heart!

79.What did the pig say to the other pig? You take me for grunted!