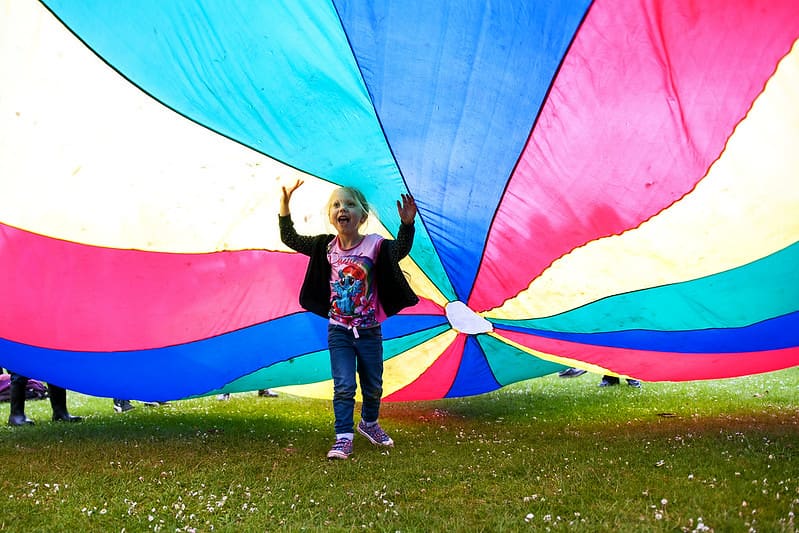 Not only do young children love playing with a parachute, but it also has great beneficial aspects to their development in Early Years.

What Do You Do With A Parachute?

There are an endless number of activities that you can play with a parachute, all in varying difficulty and each can be tailored to a specific age group. For EYFS, parachuting games are an exciting addition to their studies, and can be something completely different to try each day.

What Is A Parachute Game?

This is a fun activity that is centred around a parachute. Often, these games focus on the children holding, moving and shaking the parachute, working as a team to throw the chute in the air or lay it on the floor. The games work around variations of this, but what you can do with a parachute is endless.

Read below for a list of the best parachute games for kids - all you need is a parachute and few fun ideas!

What Games Can You Play With A Parachute?

These games are endless entertainment, so which one do you fancy playing?

Snap, Crackle and Pop Them Off!

The children all hold a handle and keep the parachute loose, still staying in a circle. Place small, soft balls on top. The children have to pretend the balls are popcorn and they have to throw them off by shaking the parachute.

Optional: The children can count how many balls come off to encourage counting practice.

Put Teddy In A Swirl!

For this, get the children to pick items to place in the middle of the parachutes. This can be teddies, clothes, small balls - whatever you have to hand. Once in the centre, the children each take a handle and walk in a circle, holding the parachute at waist height. They are becoming the washing machine! The children can run faster, slower, or change direction (to stop them from getting dizzy). Once they have run around for about five minutes, the teddies are completely washed.

Bonus Game: Once they are washed, they made need to be tumble dried. The children can shake the parachute to make them jump around.

Shake Up The Fruit Bowl!

Firstly, the parent, carer or teacher must assign each child a fruit name. Pick three different fruits (kiwi, lemon and apple, for example) and give each child a specific fruit, but just make sure there are an even number of each one. If you have an even number, add more fruits until each group is equal. The children then shake the parachute down on the floor. When a fruit is called, the parachute is held up in the air and the children whose fruit was called run underneath and swap places with each other. A kiwi, for example, can only swap places with another kiwi!

If Fruit Salad is called, all of the children run and swap places with any other empty handle. Please be careful not to run too quickly as you don't want to bump heads!

Top Tip: To make this slightly easier for younger early years children, the parent or teacher can simply call two children's names and they swap places.

Don't Take Your Eye Off The Ball!

This is all about teamwork. Make sure the children are holding a handle each and pulling the parachute tight. Place a ball in the centre of the chute. The children must work together to try and roll the ball along the edge of the parachute without it falling off. Whichever side it falls off, all of the children on that edge have to hold the parachute with just one hand. If it happens again on one side, they will have completely let go, so these children have lost the game.

Top Tip: The competitive aspect of this is probably best suited for the older children, so this aspect can be taken out and the children can simply try and roll the ball on top of the parachute. This still encourages them to work together.

Let's Get The Ball Rolling!

Roll A Ball requires cooperation. Place one small ball on top of the parachute. The teacher or parent will shout one name from the group of children and everyone has to roll the ball across to the specific person. They need to work together, talk to each other and not get too excited when their name is called. A simple game but very engaging if you shout the names quickly - this is dependent on the children's abilities across the early years age group.

Watch Out For That Hard Shell!

This is the simplest of the activities but it makes the children work together really well. The children all sit underneath the parachute on their hands and knees, holding the parachute down under their feet. The parachute should form a turtle shell shape. Then, they have to work together to wriggle and move the turtle across the room. Only do this if the floor surface is acceptable, if it is smooth and easy to move on.

Top Tip: If there is a teacher or parent available, get them to take a video as the children like to see when they come out.

Round And Round We Go!

Parachute games with songs are always a hit with the early years! For this, play some music out loud for the children to hear. The children turn sideways and hold the parachute with just one hand. They then walk in a circle to make the 'Merry Go Round' motion. Whilst moving, they are encouraged to sing along with the songs. When the music is stopped or the songs change, they change direction.

Optional: The children can also jump, stop and sit down at different points.

Keep Those Critters Away!

For these parachute games, you just need a few skipping ropes or long pieces of ribbon. Place these on top of the parachute and the children have to shake it as hard as they can. They have to stop the snakes or worms from reaching them! Just be careful the ropes do not fly off of the parachute.

Watch Out For Who Is About!

For this, the teacher or parent should pick a few lifeguards and sharks. The lifeguards walk around the parachute and the sharks go underneath it. The rest of the children sit on the floor with their legs underneath, shaking the parachute to make ocean waves. The sharks gently pull children under the parachute, who shout 'Lifeguard, save me!' and the lifeguards can try and pull them back out from underneath. If they are not saved, they become a shark. Once most are sharks, the lifeguards switch and the game starts again.

These active parachute games for Early Years will get them moving, it is just important to remind them to be gentle, to watch out for each other and to not kick their legs while they play.