55 Best Octopus Puns And Jokes That Are Really Tenta-cool 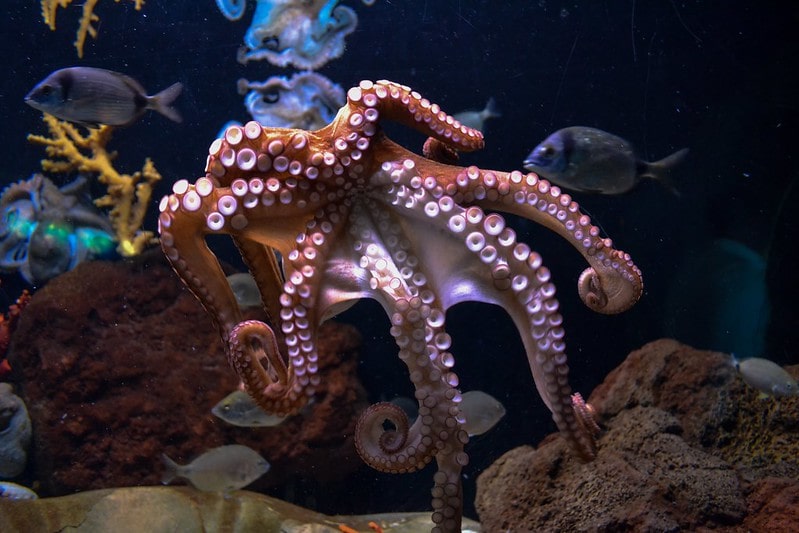 This collection of octopus jokes, puns and one liners is perfect home entertainment for children aged 5 to 10. No need for ten tickles to make them laugh, just kraken a joke or two and you will get them crying with laughter!

A few fun facts about these amazing creatures: there are about three hundred species of octopus, and they all have three hearts and blue blood! Most of them live on the seafloor and are solitary creatures, but they occasionally live in a group (or in an octo-posse, if you will!). Octopuses are really clever: they can open clamshells and move rocks around, even without hands and bones! They're also masters of camouflage and can fit into tiny spaces.

As well as being fascinating, these cephalopods make for great entertainment, so sit down comfortably and get ready to start laugh-ink!

If you're after more animal-related jokes and puns, check out these snail jokes that will make you snort with laughter, or these fish jokes that are completely off the scale!

There is nothing like an octopus joke to make children smile - they'll be squid-ling with laughter in no time!

What is the biggest danger for a baby octopus? Squid-nappers!

Why did the octopus blush? Because he saw the bottom of the ocean!

What breed of cat has eight legs and loves to swim? An octo-pussy cat!

How many tickles does it take to make an octopus laugh? Ten-tickles!

Why can't an octopus commit a crime? They don't have a bad bone in their body! (octopus don't have bones)

How do you call an octopus who plays guitar? A rock-topus!

Where does an octopus keep its money? In its octo-purse!

What does an octopus tell its girlfriend? You octopi my heart!

How do you know if an octopus is alive? You check its octo-pulse!

How do little fish get to school? They take the octo-bus!

Why is the octopus such a good cook? Because he's a chef-alopod!

What do you call a relaxed octopus? A calm-ari!

What does the octopus have on its toast? Ocean current jam!

What do humans and octopus have in common? Two sets of forearms (or four arms, in the case of the octopus!)

What is an octopus's favourite game? Squidditch!

What does the doctor say to an octopus who needs to lose weight? You need to go on a low-crab diet!

What is an octopus's favourite food? Ten-tacos!

How does a squid propose to its sweetheart? "Will you cala-marry me?"

What type of keyboard does an octopus prefer to use? Sqwerty!

What do you call a creature with the head of a shark, some claws, the body of a dolphin and the tentacles of an octopus? A crab-omination!

How many tentacles does an octopus have? Ten! (In reality, it's eight, but the joke is that they have ten-tacles)

Why did the octopus have to leave the party? It pulled a mussel dancing!

What do you call a flying octopus? An octocopter!

What do you get if you cross an octopus and a frog? A croak-topus!

What do you get if you cross an octopus and an alligator? A crock-topus!

Where does an octopus sleep? On the seabed!

What is an octopus's favourite band? Ink Floyd!

Where does an octopus go to sing? The choral reef!

Why did the octopus cross the reef? To get to the other tide!

Where does the octopus go to get an operation done? To the sturgeon!

Why is the octopus the most popular animal? Because it's tenta-cool!

How do you know if a squid has swallowed a clock? You hear a tick tock-topus sound!

Why do octopuses love camping? They sleep in tent-icles!

Why is an octopus always positive? Because it always sees the octo-plus side of things!

Why is the octopus always bored? Because he never finds anything interest-ink!

When are all octopus born? In Octo-ber!

Why is the octopus always on time? Because he looks at the clock-topus!

What do you call a group of squid? A squad!

What is an octopus's favourite item of clothing? The sock-topus!

There's no way you won't love these squid puns; they are just ink-redible!

I can never tell these twin octopuses apart, they're i-tenticle!

Octopuses make the best criminals because they're well armed.

An octopus went to get a tattoo - he wanted to get inked up!

I thought the octopus was being serious until he said "Just squidding!"

I might adopt an octopus, but first I need to ink about it.

We think you'll love these hilarious octopus jokes for kids! Funny squid stories are just the thing to make your children laugh out loud.

I hear the police are looking for a scary octopus criminal on the run. Apparently, it's very well armed and dangerous.

An octopus is menacing a cat with a gun in each one of its tentacles. The cat remains very calm, and he says "You're one gun short, pal."

An octopus is worried so he asks his friend: "What happens if I can't swim?". The other octopus replies: "Use ink if you can't swim!"

Most people think an octopus has eight legs. In fact, it has six legs, and two arms. How do you know which are which? Throw something at the octopus's head and the two tentacles that go up to its head when it says "Owww" are its arms!

One day, an octopus asks his friend if he can help with the shopping. His friend is already cooking, hoovering, cleaning, doing his homework, taking the bins out, having a bath, walking the dog and feeding the cat, so he replies "Hang on, I don't have twelve hands!"

One morning, a squid gets on a bus and goes to sit down next to an octopus. Before he can put his tentacles down on the seat, the octopus says: "I'm so sorry, it's octopied!"