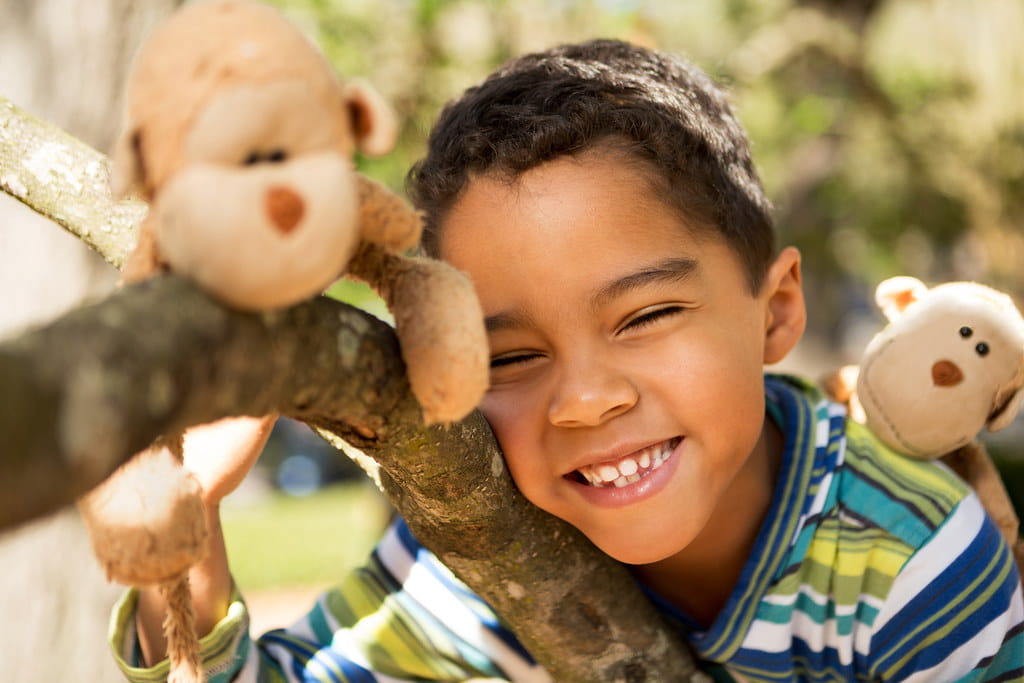 We don't know what it is, but there's something pretty funny about monkeys.

From their cheeky faces, the funny noises they make or their generally mischievous ways, there's plenty to giggle at. It's no wonder we've found endless jokes about monkeys to keep you entertained.

Of course, there's much more to these amazing animals than their entertainment value. There's tons of interesting stuff worth learning about primates. Did you know, for example, that there are over 260 different species of monkey? Or that every kind of monkey can be separated into two categories: the New World Monkeys and the Old World Monkeys? New World Monkeys live in South America and have strong tails that they use to hold onto things. Old World monkeys live in Asia and Africa and you can tell them apart by their nostrils, which face downwards.

Now that you've got your fun fact fix, we can move on to the silly stuff. What's your favourite monkey joke?

And when you're done with our monkey jokes for kids, we've got plenty more funny animal jokes for you to giggle at. If our jokes about a monkey's favourite food had you chortling, why not check out our banana puns?

Looking for a few classic gags? These funny monkey jokes are a great place to start.

2. How do monkeys get down the stairs? They slide down the banana-ster.

3. Where do monkeys get their gossip? On the ape vine.

4. What's furry and dangerous and lives in a tree? A monkey with a machine gun.

5. What do you call a monkey in a minefield? Baboom!

6. Why don't monkeys play cards on the savannah? Too many cheetahs around!

7. Why did the monkey put a net over its head? It wanted to catch its breath.

8. Today I learnt that humans eat more bananas than monkeys. I can’t remember the last time I ate a monkey!

9. What is a monkey’s favourite dance move? The banana split.

10. Why did the monkey take its banana to the doctors? It wasn’t peeling good.

11. What do you call a monkey flying in the sky? A hot air baboon!

12. Which side of a monkey has more hair? The outside.

13. What happens when you double cross a monkey? They go bananas.

14. What do you call a monkey at the south pole? Lost!

15. If there were no bananas, what fruit would monkeys choose? Ape-ricots.

16. Why did the monkey cross the road? Because the chicken had the day off.

17. What kind of monkey sounds like a sheep? A baaa-boon.

18. What do you call a crowd of monkeys? An Orangatangle.

19. Why do monkeys carry their babies on their backs? Because it's too hard dragging a buggy up those trees.

20. What happens when monkeys gets fleas? Lunch!

21. What is a monkeys favourite Christmas song? Jungle Bells.

22. Why did King Kong climb the Empire State building? Because he couldn’t fit in the lift.

23. What d'you call a monkey with a banana in each ear? Anything you like, it won't be able to hear you!

24. What do you call an angry monkey? Furious George.

25. What do you call a man who can jump from tree to tree? A monkey's uncle.

26. What do you call a monkey with a wand and a broomstick? Hairy Potter

How about something a bit more 'punny'? Try these...

29. What do monkeys get when they sunbathe? An orangu-tan.

30. Where should a monkey go if she loses her tail? To a re-tail-er.

32. What do monkeys wear when they are cooking? Ape-rons.

33. Why did the monkey like the banana? It was ap-peal-ing.

34. What do you call a monkey that's in charge of its tree? A Branch Manager!

35. What do you call a restaurant that throws food in your face? A Monkey Business.

36. What do you call poorly monkeys? Gor-ILL-as.

37. What do you call an angry monkey that loves fruit? Grr-ape.

38. Where do monkeys go for a drink? The monkey bars!

41. What do monkeys do at work? Monkey business.

42. What's kind of monkey will liven up a party? A funk-key.

43. What’s a monkey’s favourite kind of computer? An Ape-le mac.

Do you find every kind of monkey funny? Check out these jokes about chimpanzees.

44. What did the banana say to the chimp? Nothing. Bananas can't talk.

45. What do you call a baby monkey that takes after its mum? A Chimp off the old block.

46. What do monkeys do for laughs? They tell jokes about people.

47. What do you tell a naughty monkey? Stop chimping about.

48. What does a woodcutter say before he chops down a tree in the rainforest? Let the chimps fall where they may.

49. What should you bring to a party in the jungle? Chimps and dip!

50. What do you call a monkey who wins every sport? A chimpion.

51. How do you get an escaped lion back into its habitat? You use a bargaining chimp.

Are gorillas your favourite kind of monkey? Try these on for size.

55. What did the banana do when it saw a gorilla? The banana split.

56. Why shouldn't you get into a fight with a monkey? They use gorilla warfare.

57. Why do gorillas have big nostrils? Because they have big fingers!

58. What’s the first thing a gorilla learns in school? The ape b c’s.

60. How did the gorilla know she was poorly? She had a belly ape.

61. Why did the Gorilla fail its exam? He didn't have the ape-titude.

62. What should you do if you find a gorilla sitting at your school desk? Sit somewhere else!

63. What's the best time of year to see gorillas in the wild? Ape-ril.

64. Why did the gorilla cross the road? He had to take care of some monkey business.