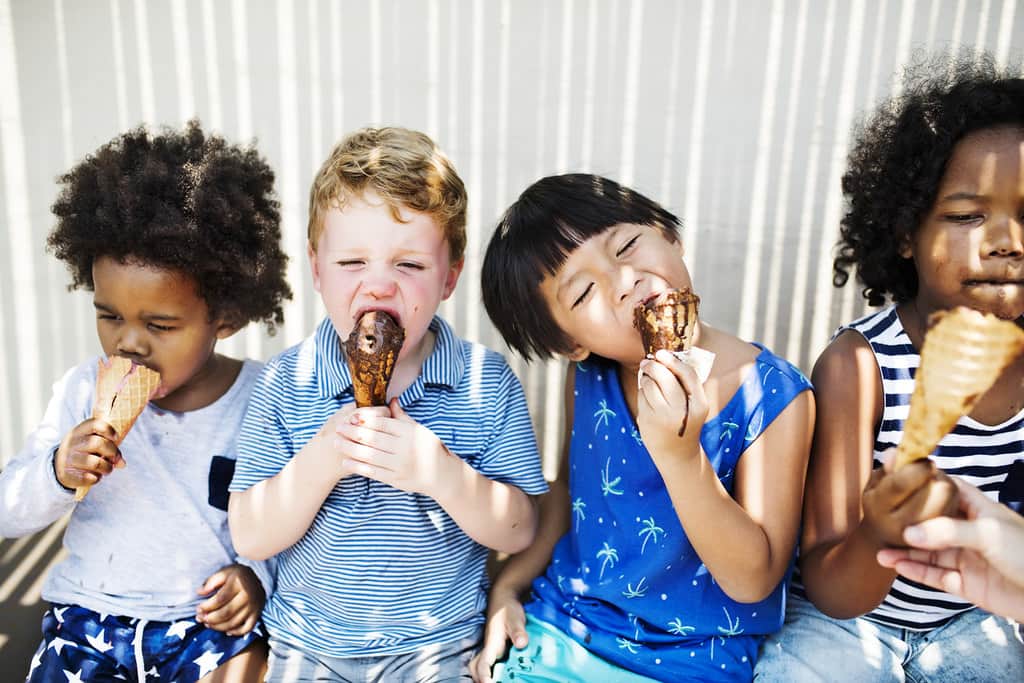 There's nothing better than queuing up at the ice cream van for your first Mr Whippy ice cream cone of the summer. Or, perhaps, walking round the park on a hot day with a fruity ice lolly.

In fact, it would seem Brits love ice cream whatever the weather. Apparently, British people are tenth in the world when it comes to ice cream consumption. On average we eat about 14 one litre tubs of ice cream per person per year!

If you're looking for a few facts about your fave sweet treat, we've got the scoop: did you know, for example, that it takes about 50 licks to eat a single scoop of ice cream? Or that, whilst nobody quite knows who exactly invented ice cream, we do know that people were enjoying similar frozen treats as far back as Roman times? Emperor Nero would send his servants to fetch snow from the mountains and make himself an icy treat by mixing it with honey and fruit. Eating snow? What an... unusual delicacy.

Whatever its origin, we couldn't be more grateful it's here now. Are you ready for a bit of an ice-cream themed giggle? Take a look at our 60 ice cream jokes for kids. Who says you can't find an ice cream funny?

We've got an ice cream joke for every occasion.

1. What are ice cream cones like as parents? Big softies.

2. Why do British ice cream cones carry an umbrella? There’s always a chance of sprinkles.

3. Why do you never meet a workaholic ice cream? They've always known how to chill out.

4. Why does ice cream always get invited to the party? Because it’s cool.

5. Why did the newspaper journalist interview the ice cream? She was looking for the scoop.

6. What’s the best band to listen to while eating ice cream? Spoon.

7. How is ice cream as a boyfriend? The sweetest.

8. Why did the ice cream truck break down? Because it was driving down a Rocky Road.

9. Why is ice cream terrible at tennis? It has a soft serve.

10. What did the starstruck ice cream say to his lover? It was mint to be.

11. Why does the ice cream man go so slow? Because he’s a sundae driver.

12. What did the ice cream cone write on his girlfriend's Valentine's Day card? You make me melt.

13. You know what they say about ice cream parents? They always have flavourites.

14. Why doesn’t ice cream get invited to parties? Because it's a drip.

16. What do you call an empty house with an ice-cream sundae on top? Desserted.

17. What do you call an ice cream cone with a surprise flavour in the bottom? A twist cone.

18. What does an ice cream lawyer say? You got served!

19. What do you get when you milk a cow in Antarctica? Ice Cream.

20. A boy walks into an ice cream shop and says, "I'd like two scoops of chocolate ice cream, please." The girl behind the counter replies, "so sorry, we're out of chocolate." "In that case," the boy says, "I'll have two scoops of chocolate ice cream." "Sorry," the girl says. "We have no chocolate." "Could you give me some chocolate?" he insists. Feeling more irritated, the girl asks, "Sir, will you spell 'van,' as in 'vanilla?'" The boy spells, "V A N." "Now spell 'straw,' as in 'strawberry.'" "OK. S-T-R-A-W." "Now," the girl asked, "spell 'stink,' as in chocolate." The boy hesitates, confused, and replies, "There is no stink in chocolate." "YES." The girl says. "That's what I've been trying to tell you!"

Looking for something a bit more clever? These funny puns should make you chuckle -  we've got an ice cream pun for just about everyone.

22. What's the optimistic ice cream's motto? Anything is popsicle.

23. How does Reese eat an ice cream? Witherspoon.

24. Which football team loves ice cream the most? Aston Vanilla.

25. What do cats like on their birthday? Cake and mice cream.

28. What did the ice cream's teacher say when she misbehaved? I don’t cone-done that behaviour.

29. Where do you learn to make ice cream? Sundae School.

30. What do you say to ice creams when they get engaged? Cone-gratulations!

32. How does an ice cream wish you a Happy Birthday? Congratulations, it’s sherbert day!

33. What is an ice cream’s favourite TV show? Game of Cones.

36. Why do they make ice cream from cow's milk? It’s an udderly great idea!

37. Did you hear about the ice cream that went to prison? They got their just desserts.

38. How do you wish an ice cream a happy birthday? Hope your birthday is gelato fun!

39. What is ice cream’s favourite breed of dog? Dashchundae.

40. What does the ice cream call her girlfriend? Her one and cone-ly.

What list would be complete without a few classic knock knock jokes? See if these make you laugh.

I scream, you scream, we all scream for ice cream!

Ice cream every time I see a ghost!

These ice cream puns are short and sweet.

45. Wanted to get the scoop on the history of ice cream, so I went to Sundae school.

47. I saw the world’s biggest ice cream yesterday. I’d like to see someone top that.

48. Asked the person in the ice cream van for a cone. They asked “hundreds and thousand?” I said “no, just one”.

50. They offered me a job at the local ice cream shop but I turned it down. I don’t like working on sundaes.

51. The ice cream scoop got vanilla ice cream in my chocolate ice cream. What a twist!

52. My favourite superhero is the Ice Cream Man.

54. Two ice cream vans crashed on the motorway. The police put some cones out, thankfully no-one had whippy-lash.

It's not just ice cream jokes we specialise in. Check out these frozen dessert-related puns.

55. What happens when I watch a horror film featuring my favourite frozen dessert? I scream.

56. What are the only kind of ice cream desserts that astronauts can eat? Floats.

57. What do you call a divorce dispute between ice cream parents? A custardy battle.

58. Why are ice lollies always so stuck up? They have a stick going right through their middle!

59. What did the popsicle say to his daughter? Stick with me, kid!

60. Why does the ice cream always get picked to be on everyone's team? Because with them, anything is popsicle.