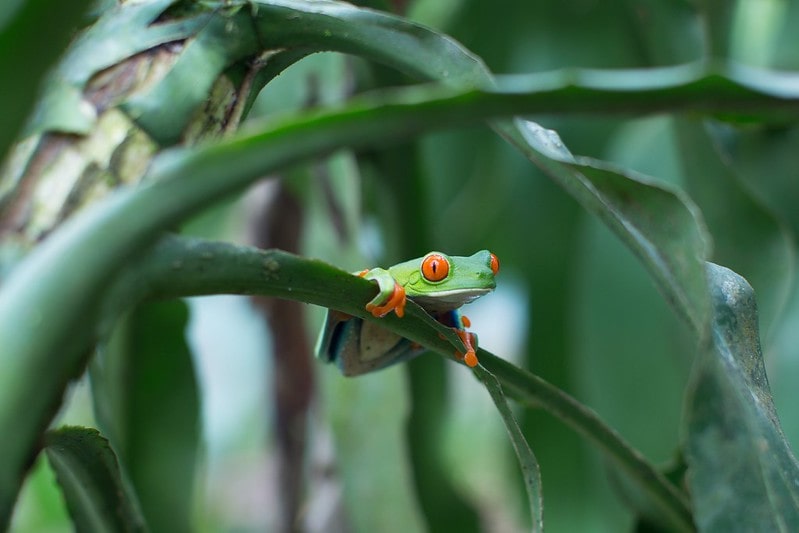 Did you know that frogs don't need to drink because they absorb water through their skin?

How about the amazing fact that frogs can jump over 20 times their body length or that their unique call can be heard for over a mile? That's rather impressive when you consider how small they are.

As well as being fascinating little creatures and great fun to watch as a child growing from a tadpole into an adult, frogs are pretty hilarious to look at too, with their grumpy faces, googly eyes and long legs. The unique look of these funny frogs means they've inspired some toad-ally brilliant and funny jokes for kids over the years. So if you want to make your friends and family really hoppy, why don't you tell them some of these ribbeting puns and funny kids jokes? If frogs aren't your favourite animals, how about telling some fantastic jokes about other animals. We've got the best one-liners that'll quack you up about birds, too. Or if you prefer fish, you'll be hooked by these hilarious jokes.

Love a frog joke? How about 50 fantastic frog jokes that'll have you hopping around with laughter? Read on for a whole pond's worth of the best frog jokes that are really quite ribbeting.

1.What do frogs do with paper? Rip-it

2.What do you call a girl with a frog on her head? Lily.

3.Why are frogs so happy? Because they eat whatever bugs them.

4.What do you call a frog who has no legs? Unhoppy.

5.What kind of shoes do frogs wear? Open toad sandals.

6.What do stylish frogs wear? Jumpsuits.

7.Why did the frog have to go to the hospital? The doctor said he needed a hopperation.

8.What is a frog’s favourite sport? Croaket.

9.What would you call a frog that has parked illegally? Toad.

10.Why did the frog read Sherlock Holmes? He liked a good croak and dagger story.

Enjoyed all those hilarious jokes? We've got even more to get you croaking with laughter! Read on for more jokes inspired by these hoppy-go-lucky little amphibians.

11.What do you get if you cross a frog with some mist? Kermit the Fog.

12.What kind of music do frogs like best? Hip hop.

13.What kind of music do posh frogs listen to? Hopera.

14.What do you get when you cross a rabbit and a frog? A bunny ribbit.

15.What is a frog's favourite year? A leap year.

17.What do you get when you cross a frog with a dog? A croaker spaniel.

19.What do frogs drink? Croaka-cola.

20.Why did the tadpole feel lonely? Because he was newt to the area.

21.What do Scottish frogs play? Hop-Scotch.

22.What do you call a frog spy? A croak and dagger agent.

23.What happened when the frog's car broke down? He jump-started it.

24.Where does a witch's frog sit? On a toadstool.

26.Where do you get frog's eggs? At the spawn shop.

27.Where do toads put their hats and coats? In the croakroom, of course.

28.What did the bus driver say to the frog at the bus stop? Hop on.

29.What do you get if you cross a science fiction film with a toad? Star Warts.

30.What is a frog's favourite sweet? A lollihop.

31.What does a frog order at a restaurant? French flies and a diet croak.

32.Waiter, waiter, do you have frog legs? No, I always walk this way.

33.What do you call a frog hanging over your head at Christmas? Mistletoad.

34.Why did the frog make so many mistakes at school? It kept jumping to the wrong conclusions.

35.What do you get when you cross an alligator and a poison tree frog? A croakadile.

36.Did you hear about the short-sighted frog? He had to go to the Hopthalmologist.

37.Which frog has horns? A bull frog

38.What do you get if you cross a snake and a frog? A jump rope.

The Best Frog And Toad Puns

39.This story is ribbiting.

43.We're in a Kermitted relationship.

47.Interesting puns, but none of them were ribbiting.

48.Frog parking only. All others will be toad.

Kermit a crime, and you’ll get locked up by the police.

I toad you already - listen!

If you've enjoyed reading and learning all these frog puns and jokes why not learn even more about these fascinating creatures? We bet you don't know the difference between frogs and toads! Find out how to tell really quickly and impress all your friends here.