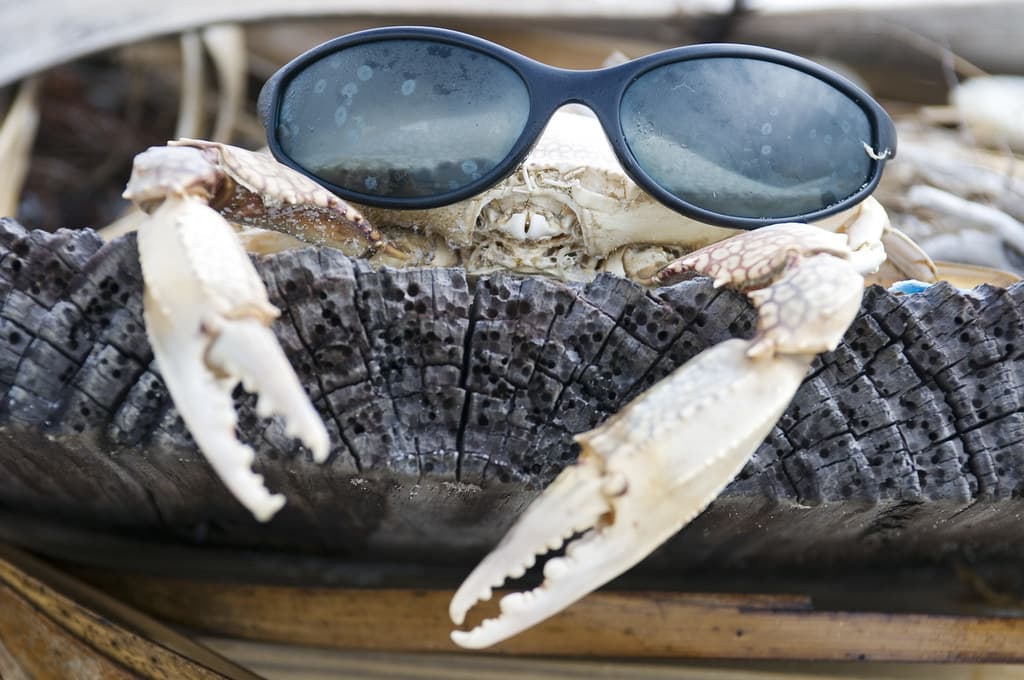 Looking for some funny crab jokes?

We’ve searched the seas and found some clawsome jokes about crabs that children will love! So if you’re feeling a bit crabby and need some cheering up, have a scroll through our list of crab puns.

Water you waiting for?! Let’s get cracking!

Let’s dive right into some Who, What, Where jokes shell we?!

1) Why did the crab keep all of the seaweed to itself? Because it was shellfish!

2) Did you hear about the crab that went to the gym? He pulled a mussel!

3) What do you call a crab in self-isolation? A hermit crab!

4) What is the best job for a crab? A crab driver!

5) What does a hermit crab call its home? Michelle!

6) What do you call a crab that throws things? A lobster!

7) Why do crabs never give waiters a tip? Because they’re shellfish!

9) Why was the hermit crab embarrassed? Because the sea weed!

10) Where do crabs and lobsters catch their trains? King’s Crustacean!

11) How does a crab feel when it eats too much? Clawful!

12) Where do crabs and lobsters save all of their money? In a sea bank!

13) What would a crab do with a smartphone? Take lots of shellfies!

14) How do crabs get around on land? They use the sidewalk!

15) What kind of helmet does a hermit crab wear? A shell-met!

16) What party game do crabs like to play? Salmon says!

17) What do crabs do on their birthday? They shellabrate!

18) What do crabs order when they go to a coffee shop? A cup of crab-uccino!

19) How to crabs call their friends? On a shell phone!

20) Why do crabs never give to charity? Because they’re shellfish!

21) Where do shellfish go to borrow money? To a prawn broker!

22) Why didn’t the crab and lobster share their food with the octopus? Because they are shellfish!

23) Why don’t crabs like basketball? Because they are afraid of the net!

24) What do crabs need to stay healthy? Vitamin Sea!

25) What is a crabs favourite fruit? Crab apples!

26) How do you know when a crab has had too much fizzy drink? It starts to walk in a straight line!

27) Why was the crustacean unhappy? Because his mum was being really crabby!

28) Why is the sand so quiet? Because the waves keeping going “Ssshhhhhhh!”

29) How much salt do hermit crabs like on their food? Just a pinch!

30) What do you get if you cross an apple with a shellfish?  A Crab!

31) How could the crab afford to buy a new house? He prawned everything!

32) Why did the crab get bad grades? Because it was below C level!

33) Why did the crab blush? Because it saw the ocean's bottom!

35) Why did the crab cross the road? To get to the other tide!

36) Where do crabs sleep? In water beds!

37) What did the wandering crab say when it finally made its way back to the ocean? Long time no sea!

38) What lives in the ocean, is grumpy and hates its neighbours? A hermit crab!

39) What did the lobsterman say when his crate turned up empty? It-piers we have a problem!

40) What does a lobster say when he’s confused? Can you please be more pacific?!

41) What does the crab say when she’s disagreeing with the lobster? I don’t quite sea it that way!

43) What do you call a crab who is afraid of small spaces? Claw-strophobic!

44) How do crabs leave the hospital? On crotches!

Did You Know? There are over 4,500 different species of crabs in the world, and more than 62 species found in British waters! Most crabs live in the sea but there are around 850 species of crabs that live on land and only return to the sea to breed! Crabs range in colours from bright red, green, brown, and bright blue and vary in sizes from 1 centimetre to 13 feet long!

58) The lobster is one shell of an animal!

Did You Know? Crabs are decapods, meaning ‘ten footed’, and belong to the crustacean family. Crabs have ten legs which include one pair of pinchers, called chelipeds and four pairs of walking legs!

Ready for some more crab puns? Beclaws these knock knock jokes are cracking!

Crab me a snack please!

Ivan awful headache after reading all these crab puns!

Did You Know? Crabs are omnivores, meaning they’ll eat almost anything they find, meat or plants!

These crab-u-lous one-liners are shore to raise a smile!

62) I’d give you my best one liners here, but I’m too shellfish!

65) Life just seems to be two steps sideways then one step back!

66) Crabs are bad at learning a new language because they never care about the vo-crab-ulary!

67) You should never make friends with crabs because they’re all so crabby!

68) The hermit crab refused to go in its shell because it was claw-strophobic!

69) The crab is telling jokes, but nobody laughs because they are all crabby jokes!”.

70) A great bit of advice from a hermit crab: “It’s ok to come out of your shell and think outside the box!”

71) I used to look for shellfish at my local beach every day, until one day I pulled a mussel!

72) Crabs always add a pinch of salt to their meals!

Did You Know? A group of crabs is called a cast. Crabs that live in a group tend to be very cooperative, helping each other to source food and provide protection for their families.